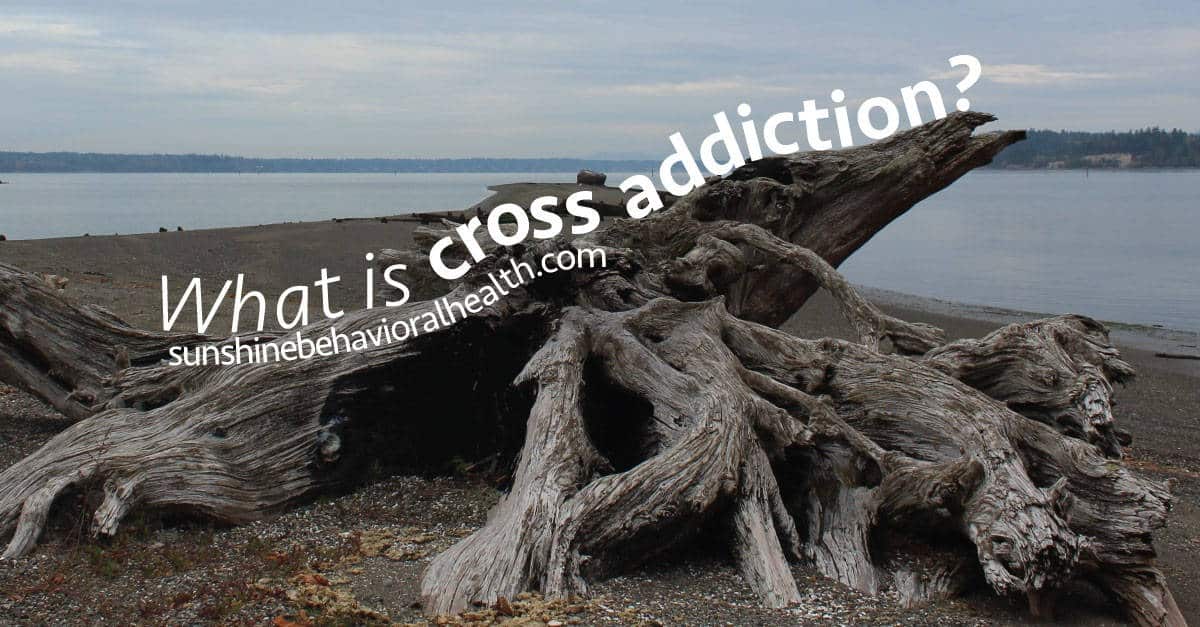 The Dangers of Cross Addiction: What You Need To Know

The Dangers of Cross Addiction: What You Need To Know

You’re in recovery, and proudly claimed that one-year chip. Then, you get in a car accident. Or you somehow injure your back. The agony is unbearable. But, the emergency room doctor can help with that. Some opioids to manage the pain.

And they help. A little too well. The bruises and the breaks, they’re not hurting so bad. Unfortunately you’re feeling a little itch, that nasty little urge at the back of your mind that screams for more.

Then you’re out of the hospital and in some potential hot water. Why? Credit cross addiction.

What is cross addiction?

Cross addiction is when a person essentially replaces one addiction with another. It doesn’t have to seamlessly occur immediately after achieving sobriety, although it can. There can be a span of many sober months or years, in fact. Sometimes a jarring life event — like the car accident mentioned above — can revive addictive behaviors.

It can be due to a loss — a spouse dies, and that glass of wine takes the edge off. But wait? What about the whole bottle? If one glass is good, wouldn’t one bottle be great? Therein lies the danger.

Addiction is tricky. It takes work to address the disorder, and there really is no cure. Rather it’s a managed condition. “Treatment enables people to counteract addiction’s disruptive effects on their brain and behavior and regain control of their lives,” according to the National Institute on Drug Abuse.

How common is cross addiction?

It’s tough to say exactly how common cross addictions are. One could argue that anyone struggling with something habit-forming is a candidate for cross dependence. If the conditions are right — particularly if a person hasn’t resolved what compels them to overconsume in the first place — then he or she is at risk to sink back into an addictive behavior. It could be a relapse into the substance or behavior they initially were addicted to, or it could be something different, but equally disruptive.

Stories pepper the internet about people who have weight-loss reduction surgery, and instead of large quantities of food, they turn to heavy drinking or shopping or other addictions. In that case, the ability to overeat has been curbed, but the compulsion finds another outlet. That’s the cross addiction definition in a nutshell.

The data is a bit scary for people in recovery. A high number of people — more than 85 percent, according to the National Institute for Drug Abuse (NIDA) — who have a drug addiction return to using within a year.

Conditions can impact the likelihood of relapse or cross addiction. NIDA compares the condition to a street corner: unpoliced, dealers can sell drugs. Policed, the dealers vanish, and the likelihood of use drops. Monitored, addiction can more easily be managed; unmonitored, chaos (and abuse) can take over.

Quitting that promise of euphoria is hard. NIDA scientists trained rats to push a button for a dose of cocaine. Some levers lit up to indicate that the white stuff was available; others flashed on to say that there would be no drug available.

The rats, once they learned which light meant cocaine was on tap, did not quickly unlearn that detail. They held onto that data for 300 days, or approximately half of their lifespans. The no-drugs-are-here light, in contrast, did not change any high-hunting behavior. In other words, if the path is clear for a person who is addicted to drugs, the odds that they’ll make a beeline to the drugs are more likely.

Humans with an addictive bent have a hard time putting on blinders and blocking that so-called cocaine light.

Kicking the habit of pursuing that feel-good state can be a challenge on good days. Traumatic events and upheavals can spark a return to dependency. The National Institute of Mental Health studied how people responded to ordeals. Sadness, anxiety, anger, insomnia, and loss of focus are all warning signs that someone may not be coping well to events.

How do you avoid cross addiction?

Being realistic about addiction can put a roadblock in the way of developing cross addiction and cross dependence. Knowing that there are situations that could make one fall off the wagon may help.

A good support network is invaluable. Understanding that whatever may be triggering the urge to scratch that compulsive so-called itch can help a person survive a rough patch. And in some cases, it might be time to rededicate oneself to recovery. That can mean seeing a therapist, attending more 12-step meetings, or entering a rehab center for further treatment.

When receiving medicines, be sure to inform doctors, nurses, and pharmacists of your history of addiction. They can work with you to manage pain with non-habit-forming medications.

Age seems to be another factor. Not the only one, but while people might assume substance abuse declines with age, the U.S. Substance Abuse and Mental Health Services Administration (SAMHSA) says “substance use is an emerging public health issue among the nation’s older adults.” It also estimates that the number of older Americans with a substance use disorder is expected to climb from 2.8 million in 2002-2006 to 5.7 million by 2020. This in part could be due to older adults being more likely to have chronic health problems.

In the case of treating opioid addiction, for example, more of a drug — a different drug — isn’t necessarily the problem. The question has been brought up time and time again, if medications like methadone and buprenorphine, which are usually prescribed to recovering addicts to help them through withdrawal, are just swapping one high for another. The short answer is that they are more help than harm. By muting the effects of the opioids people are addicted to, and curbing that rush of euphoria that typically, methadone and buprenorphine — among other related offerings — can be quite effective tools toward recovery.