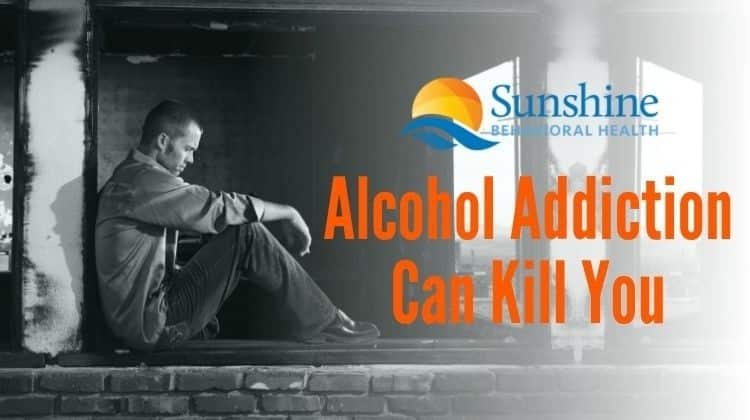 Many people see alcohol as a benign substance. After all, beer, wine, and spirits are legal to obtain after the age of 21, and alcohol can be found anywhere from workplace celebrations to sporting events. Many drink freely without fully understanding that alcohol kills more than 88,000 people in the United States every year.

While most people aren’t going to ask themselves “can you die from drinking?” before they have another beer, it is important to know both the short-term and long-term risks of binge drinking, excessive drinking, and alcohol addiction.

Can you drink yourself to death? Unfortunately, the answer is yes.

How Can Alcohol Kill You?

What kills alcoholics is dependent on many factors, one of which is the amount of alcohol consumed. Frequent binge drinking or excessive drinking can have significant long-term health impacts that can slowly lead to organ failure or death. Some long-term impacts of alcohol addiction include:

Can binge drinking kill you even if you only do it once? Sadly, even one night of heavy drinking can produce terrible consequences. Alcohol poisoning is a life-threatening condition that can be caused by drinking large amounts of alcohol in a relatively short period of time.

If not treated immediately, alcohol poisoning can lead to seizures, vomiting, irregular breathing, unconsciousness, or death. Tragically, the practice of consuming 21 drinks on your 21st birthday is one of the most common times for alcohol poisoning.

Excessive alcohol consumption can also lead to immediate death for you or an innocent bystander. Some unintended consequences of alcohol use are:

Can Cirrhosis of the Liver Kill You?

Cirrhosis of the liver is a serious condition and is often caused by excessive alcohol use. It causes permanent scarring and damage, preventing your liver from working properly.

Liver cirrhosis is a deadly condition. It blocks blood flow and creates portal hypertension. This condition can cause enlarged veins, swelling of the legs, ankles, and feet, and infections in the intestines. Portal hypertension can also lead to hepatic encephalopathy, which contributes to the buildup of toxins in the brain and creates confusion and thinking difficulties.

Cirrhosis of the liver can also increase the risk of developing deadly bacterial infections, liver cancer, gallstones, and liver failure.

Can Liver Failure Kill You?

Does alcohol kill your liver? It absolutely can. Liver failure means that your liver no longer works properly. Your liver’s job is to filter blood from the digestive track and then divert the blood to other areas in the body. The liver is also responsible for detoxifying your body from chemicals and drugs in addition to making proteins that impact blood clotting.

When your liver fails, your best option for survival is a liver transplant. Without a functioning liver, your body is unable to metabolize drugs, leading to a buildup of toxins in your body. You also might face blood clotting issues, which means that if you are injured, your body might not be able to stop the bleeding, or you might develop blood clots in veins or arteries, blocking blood flow.

How Long Does It Take to Die from Alcoholism?

Overdosing on alcohol is just as dangerous as overdosing on other drugs. How much alcohol can kill you depends on your tolerance to alcohol as well as your gender, age, weight, and any medical conditions you have, such as diabetes or hepatitis. Using certain medications while drinking alcohol can also produce harmful effects.

In general, for an average adult male, a lethal dose of alcohol is between 5 and 8 grams of alcohol per kilogram of body weight. If that adult is 60 kg, or 132 pounds, death is likely to occur after a liter of spirits or four bottles of wine.

This is just the known lethal dose, though. Alcohol poisoning, which is also life-threatening, can happen at much lower doses. Some people may begin to show signs of alcohol poisoning after only four or five drinks within a two-hour period of time.

The Stages of Alcoholism

Having an occasional drink does not automatically mean that you are dying from alcoholism. But, for some, the occasional drink turns into a long-term addiction. If that’s the case for you or someone you know, you might be wondering, “How long does it take for an alcoholic to die?” The answer to this question is a bit complicated.

Alcoholism has five distinct stages. Your risk of long-term health effects and death increase considerably as you move through the stages. Each person moves through the stages at different rates, with some staying at an earlier stage for a long time and others skipping stages and moving quickly to end-stage alcoholism.

In the first stage, people begin to experiment with drinking larger amounts of alcohol. People at Stage 1 tend to be college-aged or young adults. While they may not drink every day, or even every week, when they do drink, they consume several alcoholic beverages at a time. Generally, binge drinking is considered to be five or more drinks in two hours for men and four or more drinks in two hours for women. Alcohol poisoning or death via car accidents or other risky behaviors are the greatest risks at this stage.

Once a person moves past occasionally binge drinking at a party or social gathering to drinking more frequently, such as every weekend, they have moved to the second stage. While some people consume a beer or glass of wine every evening, Stage 2 alcoholics use alcohol as a way to feed better, alleviate stress, cope with sadness, or as a reason to get together with other people.

In Stage 3, the frequent or excessive alcohol use has begun to experience, social, financial, emotional, physical, or workplace consequences of their drinking. They might be drinking so much now that the alcohol makes them sick or they are engaging in frequent illegal or risky activities influenced by their alcohol use. Their behavior may become erratic at this stage and friends, family, or coworkers might begin to pull away.

At this stage, drinking is no longer a social activity and instead might be done in isolation. The risk of dying from drunk driving or other alcohol-related accidents increases significantly at this stage.

In Stage 4, the individual has become dependent on alcohol. He or she might not feel the same effects with their usual amount of alcohol, requiring increased drinks to feel buzzed. As a result, they may feel withdrawal symptoms, such as tremors, sweating, racing heart, irritability, or insomnia, as the alcohol wears off.

The person will drink again in order to alleviate the symptoms. At this stage, the individual typically understands that drinking is causing problems but he or she is unable to control his or her drinking.

In Stage 5, drinking for pleasure no longer occurs. Instead, the individual feels a psychological and physiological need to drink. They crave alcohol, and may even turn to other drugs at this stage. Drinking is a compulsion and happens despite the consequences. At this stage, even if someone is told that their drinking is killing them, they are unable to stop on their own.

Once someone reaches end-stage alcoholism, the brain, heart, kidneys, and liver have already experienced significant damage. The individual might also be experiencing severe malnutrition, making it difficult for the body to heal itself. At this stage, the body begins to deteriorate rapidly and if the alcoholism is not treated, the body can go into fatal liver, kidney, or heart failure. Our insurance verification team works quickly to verify your insurance benefits to place you into one of our centers as soon as possible. Because of our industry expertise we will be able to verify this information in a timely manner and can advocate for more coverage or more time in treatment.

We strive to do this as quickly as possible while also maximizing your coverage. Our insurance verification process is of no cost to you and there are absolutely no obligations.

While sometimes it can be difficult to detect the signs of liver or kidney failure in its early stages, there are some red flags that indicate serious health problems in an alcoholic.

Binge drinking can have tragic and immediate consequences. Signs of alcohol poisoning include:

In end-stage alcoholism, you might notice additional signs of critical medical issues that need to be addressed. Some of these signs are:

Drinking kills many people in the United States. Each and every one of these deaths is preventable by not using alcohol. If you are concerned about your alcohol consumption and are thinking “alcohol is killing me,” there is hope.

Know that getting treatment is an important step in preventing alcoholic death. By stopping your drinking and living a sober life, you can halt the long-term health effects of alcohol use and keep yourself safe from tragic alcohol-related accidents and deaths. Give us a call today – we are here to support you in your journey toward a healthier life.