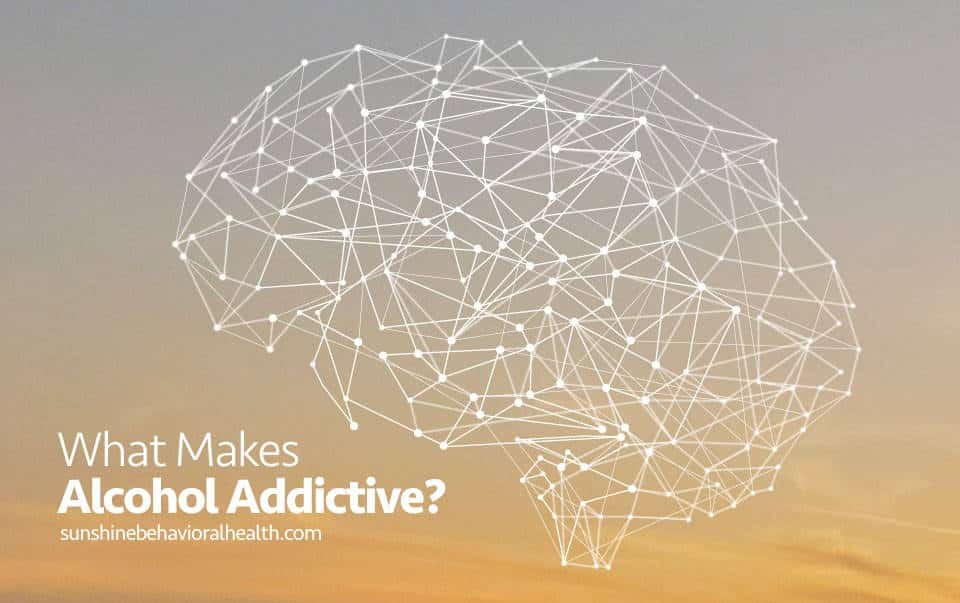 Alcohol is addictive, but how and why? Well, it’s chemicals in your brain; why, how, and how often you drink; and genetics.

Everybody knows that alcohol can be addictive, but not everybody who drinks becomes addicted to alcohol. So, how addictive is alcohol?

According to a 2007 ranking of 20 substances, researchers ranked alcohol as the fifth most harmful substance, behind heroin, cocaine, nicotine, and barbiturates. Some 22% of people who have taken a drink will develop a dependence on alcohol at some point during their lives. Addictiveness is not necessarily a measure of deadliness, however.

The World Health Organization (WHO) estimated that alcohol use worldwide caused the deaths of more than 3 million people in 2012. Other estimates stated that more than 33,000 Americans died due to alcohol use in 2015. This made alcohol the second deadliest substance after nicotine, which killed more than 437,000 that year.

When harm to society overall was added to harm to the individual, alcohol rose to the most harmful substance in a United Kingdom-based 2010 study.

The cause of alcohol addiction, like most addictions, seems to lie largely in genetics—more than half of all cases, according to one report—but more specifically in the brain. There are multiple risk factors, and an individual with alcohol use disorder may have more than one.

Habitual use of alcohol or other addictive substances increases the risk of inhibiting the body’s natural production of neurotransmitters. Using more alcohol more frequently can create tolerance, so greater amounts of alcohol are required to produce the same effects and addiction becomes more likely.

These addictive factors in alcohol are so strong that almost one-fourth of all people who use alcohol in their lifetime will develop dependence at some point.

The four “happy” neurotransmitters are:

According to a 2012 study, “Drinking alcohol leads to the release of endorphins in areas of the brain that produce feelings of pleasure and reward,” that is, the regions of the brain linked to addictive behavior and decision-making. The more alcohol, the more endorphins, increasing heavy drinkers’ response to alcohol as well as intoxication.

Alcohol significantly increases the levels of neurotransmitters, especially dopamine (40% to 360%) and endorphins in the brain, providing positive reinforcement for continued and increased use of alcohol. The brain may also stop producing as many neurotransmitters if alcohol use stops (negative reinforcement). When people stop drinking, their brains may also produce less serotonin, at least in the short term.

There are many healthier ways to raise dopamine and endorphin levels than drugs or alcohol, —such as exercise (the “runner’s high”), laughter, sex—but they don’t provoke as strong a reaction.

Another possible cause is found in levels of a specific gene that controls levels of GABA transporter type 3 (GAT-3), that in turn regulates levels of the gamma-Aminobutyric acid

(GABA) neurotransmitter that can inhibit or stimulate the release of dopamine.

According to one 2018 study, too little GAT-3 can cause a molecular dysfunction that makes the brain crave alcohol over other evolutionarily desirable substances such as sugar, increasing dopamine levels and making alcohol addiction more likely.

Other Internal Risk Factors of Alcoholism

Other internal factors that increase the risk of alcohol use disorder include:

More worrisome even than the physical factors relating to alcohol addiction are the psychological factors.

All individuals with a substance use disorder have a psychological dependence but only some have a physical dependence also. When they have both, it is a chronic addiction.

While physical addiction involves developing a tolerance for the substance and physical withdrawal—nausea, insomnia, rapid heartbeat—psychological dependence is when individuals know that a substance is harmful, but still want it. It becomes the focus of their lives and thoughts.

With psychological dependence, there may be withdrawal symptoms, but these seem to be cravings rather than physical symptoms. They can be caused by falsely claiming the substance dosage has been reduced.

Individuals with mental illnesses—depression, anxiety, bipolar disorder, schizophrenia, post-traumatic stress disorder—may try to self-medicate with alcohol or other substances. This use can add a substance use disorder to an existing mental health problem.

It’s a common enough problem to have a name: co-occurring disorders or dual diagnosis.

Other External Risk Factors of Alcoholism

External factors that may increase the risk of alcohol use disorder include:

Alcohol, like many pleasurable substances, is often safe in small amounts for many people, but there are exceptions. Moderation is the best policy not only for health reasons but because it is safer.

It’s better to discover you have a genetic or mental predisposition to alcohol use disorder when you can’t stick to one or two drinks a day on average than if you’re binge drinking (four or five drinks in a couple of hours) two or three times a week.

Alcohol is among the most addictive drugs out there. It can co-opt your brain, rewire it, and twist up your insides. Don’t underestimate it.