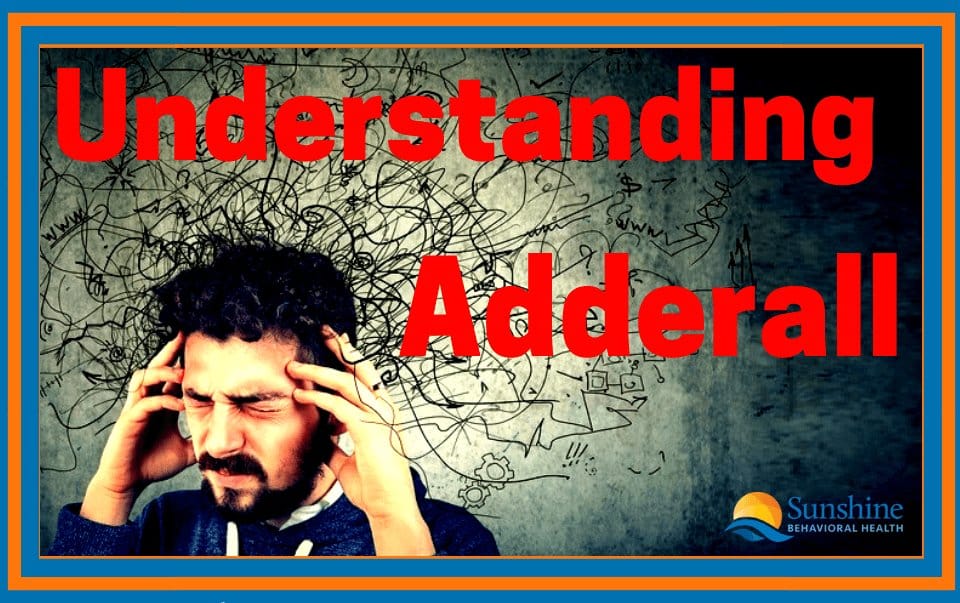 Adderall is a stimulant medication typically prescribed to relieve the symptoms of ADHD. It is considered to be an amphetamine medication, making it a schedule II federally controlled substance. Schedule II drugs have a high potential for abuse and addiction, in addition to significant risks of psychological and physical dependence. Fentanyl, oxycodone, methadone, Vicodin, and cocaine are other schedule II controlled substances.

Adderall can also be prescribed to treat narcolepsy. Some physicians will also prescribe it to treat symptoms of depression, although this is an off-label use for the medication.

Adderall is also a highly-abused medication, frequently used illicitly by students on high school and college campuses, especially around final exam times. It has also been illicitly used as an appetite suppressant and weight loss supplement.

What does Adderall do?

Adderall is often prescribed to individuals with ADHD because the stimulant properties of the medication can increase the individual’s concentration and focus. These calming effects are typically only achieved in those with ADHD, as the drug can produce the opposite effects in individuals who do not have the condition, sometimes even inducing hallucinations or intense agitation.

If you or a loved one is struggling with addiction, check out our locations:

How does Adderall XR work?

Adderall and Adderall XR are stimulant medications that affect the central nervous system. While the exact model is not yet known, scientists believe that the drugs block the reuptake of dopamine and norepinephrine, increasing their concentration in the body.

Adderall has several side effects that are important to be aware of. Some of these include:

Like all medications, Adderall does have an expiration date. After its expiration date, its potency may reduce, making its effects may be more unpredictable. One possible issue is that if you are taking expired Adderall that has lost some of its potency, you might believe you are not receiving the benefits you once did. This might result in your doctor increases your dose, potentially leading to an overdose or other harmful effects when you begin taking non-expired medication at the new higher dose.

Adderall comes in multiple formulations. The immediate release formula is short-acting, typically being effective for about four to six hours. For most users, this means that the medication needs to be taken several times a day. Adderall XR is a longer-acting formulation, with effects lasting around 12 hours. This means that Adderall XR is typically taken only once a day.

Adderall typically remains in your system for three days. However, Adderall use can be detected in your urine for up to a week and in your hair for three months. The typical half-life of Adderall is about 9 to 14 hours. This means that after 14 hours, half of the medication remains in your system. The amount in your body overall depends on the dose you have taken, as well as whether you take the medication daily or have only taken it once.

How long does 50mg Adderall last?

How long does Adderall 20mg last?

How long does Adderall 20 XR last?

While the time to peak plasma concentration in Adderall 20 XR is several hours later than with the non-XR formulation, the half-life is nearly the same. Therefore, the amount that remains in your body at any given point is similar to the instant release formulation.

How long does Adderall 10mg last?

Adderall XR 10mg – How long does it last?

Adderall XR 10 mg will remain in your system approximately as long as the instant release formulation. However, you will likely feel the effects of the medication for twice as long compared to taking the non-XR formulation.

How long does 5mg Adderall last?

A 5 mg dose of Adderall is the typical starting dose for many children. After 14 hours, the child will have 2.5 mg remaining in his or her body, with 1.25 mg remaining after 28 hours. At the 42 hour mark, approximately 0.63 mg will still be in the body.

How much Adderall should I take?

The correct Adderall dosage for your symptoms, body size and type, and age should be determined by your doctor. As with many other psychiatric medications, Adderall should be taken at the lowest possible effective dose.

In general, Adderall should not be taken at all by children under three. In children three to five years old, the typical starting dose is 2.5 mg daily. Children over the age of six generally start with 5 mg once or twice daily. The total daily dose at peak therapeutic levels typically does not exceed 40 mg per day.

Adderall should only be taken by people to whom it has been prescribed by a medical professional. There is no safe dose of Adderall obtained on the street or by other illicit means.

Who Should Not Take Adderall?

Adderall is contraindicated in individuals with heart disease or high blood pressure. In addition, those with hyperthyroidism and glaucoma should not take the medication. Finally, those who are very tense or agitated, take MAOI medications, or who have a history of drug or alcohol abuse should not take this medication.

Adderall, like all amphetamines, has a high potential for drug abuse and addiction. When Adderall is used over an extended period of time, individuals might find that they need increasing dosages of the medication to feel the same effect. This need for higher or more frequent doses is known as dependence. If you become dependent on Adderall, the risk of becoming addicted is high.

Adderall should never be taken without a prescription or be taken more frequently or in a higher dosage than prescribed. Because of its cardiac and psychiatric effects, taking this medication without a prescription or taking it in ways other than what is prescribed can be dangerous and have catastrophic effects, including sudden cardiac arrest and death. If you or someone you know is abusing Adderall, it is important to seek high-level Adderall rehab.

Questions or concerns?  Make sure to reach out to Sunshine Behavioral Health today