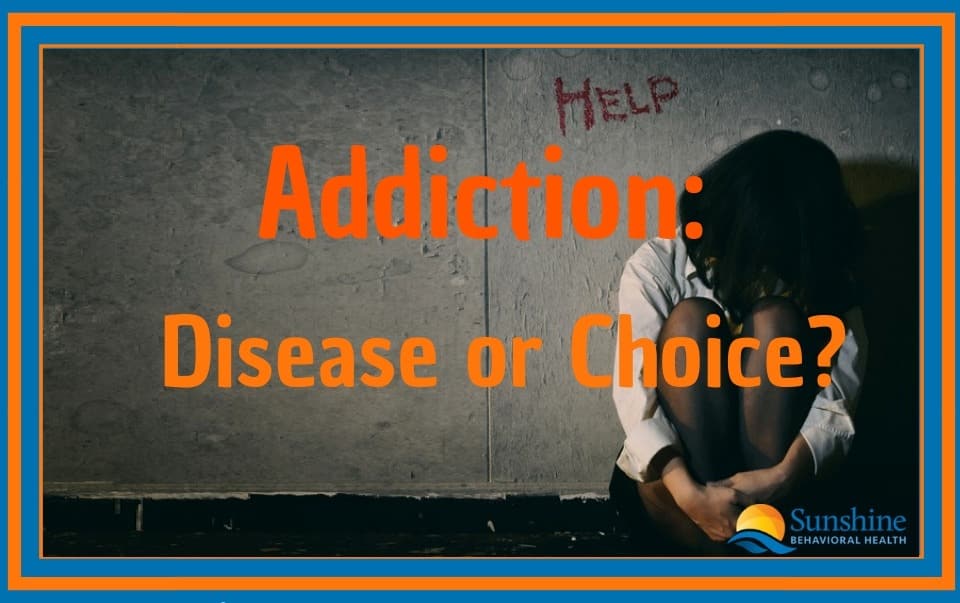 Every year, the US economy loses an estimate of $740 billion due to the use of illicit drugs.

Addiction is costing the economy a lot as expenses related to health care, crimes, and loss of productivity continue to increase. State governments, not just in the US but also globally, are working desperately on interventions to curb the deaths due to drug abuse. However, the public is still questioning: Is drug addiction a disease or a choice?

For some, and we mean even experts, they believe that addiction is a choice, not a disease. They would argue that a person’s decision whether he will use illegal drugs or not is all about making a choice. They relate it to how a person can plan ahead of time how much drink he will take or when a person gives up smoking cold turkey.

Addiction is a Disease

The addiction disease or choice debate has been going on for some time. The answer to this question will help everyone work toward the most efficient program on how to help those struggling with addiction.

Drug addiction is defined by the National Institute of Drug Abuse as a chronic condition of the brain where a patient becomes physically and psychologically dependent on a substance or behavior.

Addiction exists when a person continues taking a substance despite knowing and experiencing its adverse effects on health.

Addiction definition based on the American Society of Addiction Medicine involves not just the use of a substance, but other behaviors as well. According to ASAM, the condition occurs when the brain’s reward, memory, motivation, and related circuits become dysfunctional leading to a person’s difficulty in abstaining consistently from a behavior.

What is the Disease Model of Addiction?

During his teen years, a person can become vulnerable to addiction as their brain is still in its development stage.

When the person engages in drug use the brain’s chemistry will be altered changing the brain itself. The ASAM warns that addiction could lead to disability or death when a person fails to get treatment or join activities that lead to recovery.

A person’s decision to use a substance would manifest clearly that the individual is conscious in making a choice whether or not to take drugs. But once a person takes drugs, his willpower becomes impaired, rendering him helpless in thinking clearly. Addiction will change his brain and he will lose control over the use of a substance.

How Can Drug Use Change The Brain?

When a person satisfies his need for food or mating, his brain releases chemicals making him feel pleasure and satisfaction. Similarly, substance use releases the same type of chemicals in the brain, however, the level of chemicals released are very high.

As the chemicals are released continuously due to drug use, the brain’s circuit involved in memory, reward, and motivation change, making the person addicted to the substance.

The person will feel that the intake of a substance will allow him to feel normal.

Addiction makes the person crave for the substance and he will use it in order to achieve the same level of pleasure despite the dangers it poses on his health and surroundings. When a person is already hooked in a substance, he would prefer to use drugs compared to other activities that will also give him pleasure such as a previous interest or hobby.

The changes remain in the brain of a patient with substance use disorder even after the individual stops taking drugs. Because of this, the person who once used a substance regularly is vulnerable to triggers which could either be environmental or physical cues.

When this happens, relapse occurs and the person would resume to using a substance.

Addiction as a Chronic Disease

It will be difficult to argue that “addiction is not a disease it’s a choice,” if we see addiction as a chronic disease which has a long-lasting condition that cannot be cured, but can be controlled. The government’s health agencies are treating drug abuse and addiction as the most challenging problem of public health.

The NIDA also said that addiction involves many factors including the person’s environment, genetics, gender, and medical history.

Since it is a chronic disease, intensive treatments, monitoring, and aftercare is needed to help the patient recover. Support groups including friends, workmates, and family members are also needed for effective treatment.

Can People Be Blamed For Their Addiction?

Even if each individual is capable of deciding for themselves whether they will use a substance, there are some cases where a person is a victim of those who take profit from addiction.

The opioid epidemic has been reported as a gold rush for those who continue to take advantage of a person’s pain to sell drugs or make money from treatment.

Some patients might not be properly informed by their health care providers of the dangers of taking a certain opioid.

Meanwhile, those who had a choice to take a substance or refuse are still powerless in controlling how their brains will respond. Choices might also be prodded by the environment that people are into like peer pressure or stress.

Chronic stress is one of the major risks that lead to the development of addiction as identified in a study.

This will tell us what should the proper response is on the question: is drug addiction a disease or choice?

Despite the global magnitude of the drug problem faced by the public, the fact remains that addiction is treatable. When you or your loved one is dependent on a substance, immediate care from a treatment center and the right program for rehab will help a lot in achieving long-term recovery. Questions or concerns?  Reach out today by contacting us.