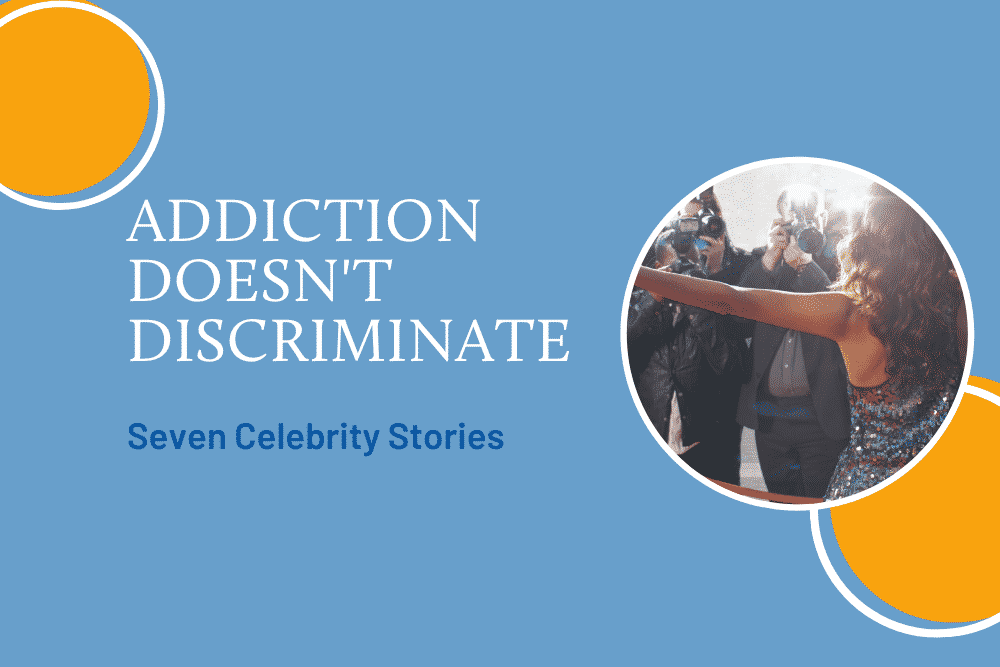 “I didn’t want an intervention… At that moment in time, I wanted to continue using drugs,” said comedian John Mulaney. The comedian was recalling how his friends (who included other comedians Seth Meyers and Fred Armisen) staged an intervention that discussed his drug use and ultimately encouraged him to enter addiction treatment.

Although Mulaney didn’t want such assistance, he credited it with saving his life. Other famous people – and not-so-famous people – have had their own struggles.

Some celebrities who have had problems with substances and behaviors include:

Mulaney has discussed his battles with drugs and alcohol on multiple occasions. His substance use started as a teenager and has included cocaine, prescription drugs, and alcohol.

He became sober in 2005, but later relapsed. Enrolling in a rehab center in 2020, he later received outpatient sober assistance.

Comedians Fuquan “Fu” Johnson, Enrico Colangeli (Rico Angeli), and Kate Quigley attended a party in Los Angeles in September 2021. All three ingested cocaine that was laced with the opioid drug fentanyl. All three overdosed, along with their friend Natalie Williamson.

Kate Quigley was the only survivor.

Michael K. Williams was found dead in his Brooklyn home on September 6, 2021. The fifty-four-year-old actor was known for his role as Omar Little in the television series The Wire and appeared in several other television and film productions.

Authorities determined that his death was accidental and due to drug intoxication, as they found fentanyl, parafluorofentanyl, heroin, and cocaine in his body. In a February 2021 interview, Williams explained how people often use substances as coping mechanisms: “Well, I assume that sometimes people think that drugs are the problem. Drugs are the symptom of a lot of the problem.”

A big gambler, Macdonald admitted that he went broke multiple times due to his betting. According to some, a compulsion to do things such as gamble, shop, steal, have sex, or work is a type of addiction known as a process addiction.

Boxer Mike Tyson’s turbulent life outside the ring might be as famous as his success inside it.

Although he fought under the influence of cocaine and other substances, he said he would use devices and clean urine to avoid detection. In 2020, he said that he gave up cocaine and alcohol, although he still used cannabis (and made money on cannabis products and merchandise).

Patricia Heaton reported that she marked three years of sobriety in September 2021.

Known for her work on the television series Everybody Loves Raymond and The Middle, the actress said that she was afraid that alcohol was affecting her mentally. Worried that wouldn’t be able to be present for her future grandchildren, she decided to quit drinking.

Actress and author Jamie Lee Curtis has also talked candidly about giving up substances, in her case, alcohol and opioid drugs.

Curtis’s father, famed actor Tony Curtis, also battled with addiction. So did her half-brother Nicholas, who died of a heroin overdose in 1994. She said her sobriety breaks a cycle that has destroyed many people in her family.

These celebrities illustrate how anyone can face addiction. Prominent people relapse and undergo interventions, accidently ingest deadly substances, have families where substance abuse is a problem, or use substances or behaviors to cope with other problems in their lives.

Some are lucky and have the opportunity to work on their recoveries. Some aren’t, proving once again how addiction doesn’t discriminate.