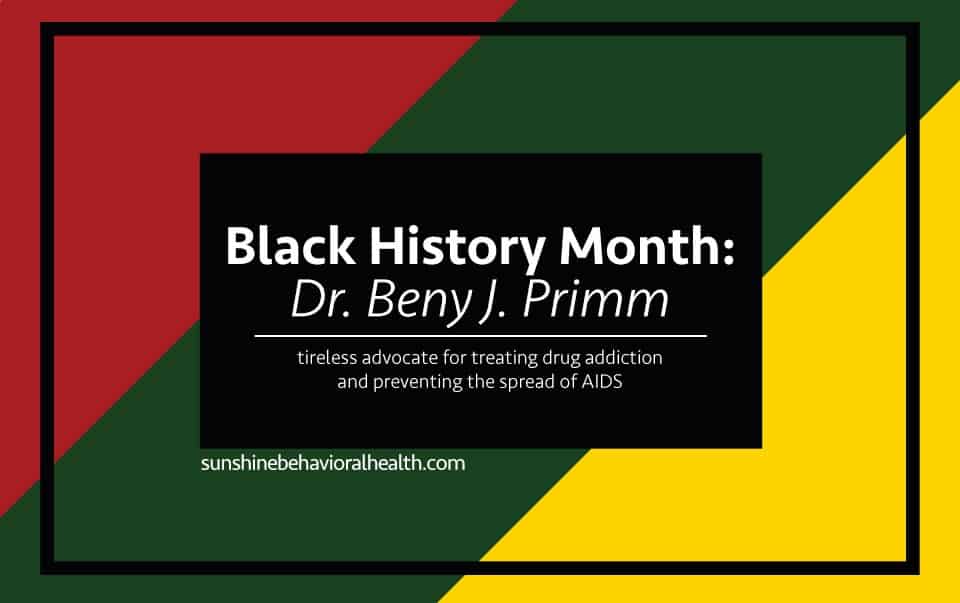 Beny J. Primm, M.D., was enjoying his chosen field of obstetrics and gynecology, but when he was a resident at a Long Island hospital he found that many white patients did not want to be treated by a African American doctor.

He became an anesthesiologist instead.

And a powerful — and early — voice in addiction treatment and AIDS prevention, all the way up to his death in 2015.

In the 1960s he practiced anesthesiology at a Harlem hospital and saw how drug addiction ravaged black youth.

He could have opted to simply treat the victims of bullet and stab wounds in the emergency room, but Primm instead decided to treat heroin addiction.

By 1969 Primm had founded the Addiction Research and Treatment Corporation (now the START Treatment and Recovery Centers), and over the next few years he’d helped open several methadone clinics, eventually becoming a renowned expert on heroin addiction and treatment.

Methadone was first developed in Germany during the 1930s by researchers who wanted a pain killer that would not be as addictive as morphine. The drug also helped the Germans during World War II when the nation faced opium shortages.

After the war, the United States obtained the rights, and gave it its modern name of methadone. Besides being an effective pain treatment, it was also found to be a useful tool in treating narcotic dependencies.

When heroin addictions surged in the 1960s, methadone took a lead role as a way to manage the problem by easing cravings and lessening the discomfort of withdrawal.

Besides using methadone to treat heroin addiction, Primm also pushed to change public health policy about intravenous drug use during the 1980s.

It was a patient with a lymph node infection, and no clear cause, that proved a crucial turning point the doctor, further fueling his lifelong dedication to treating drug addiction and sparking a desire to prevent the spread of AIDS.

Primm found that once HIV testing became more available, nearly half his patients were infected. In response he advocated for clean needle practices and strove to educate high-risk areas.

This new direction led him to be named to Ronald Reagan’s Presidential Commission on the Human Immunodeficiency Virus Epidemic in 1987. Among the commission’s work was issuing a plan for handling the AIDS crisis.

Primm also served on the National Drug Abuse Advisory Council, was associate administrator of what later became the Center for Substance Abuse Treatment, and founded the Urban Resource Institute that offered career counseling and job training for people struggling with addiction.

Dr. Primm didn’t let racist attitudes of the time limit him. Instead he found a new path, one that helped save endless lives.

With the right treatment, a person doesn’t need to to become a sad statistic of addiction. Hope — and help — is out there.