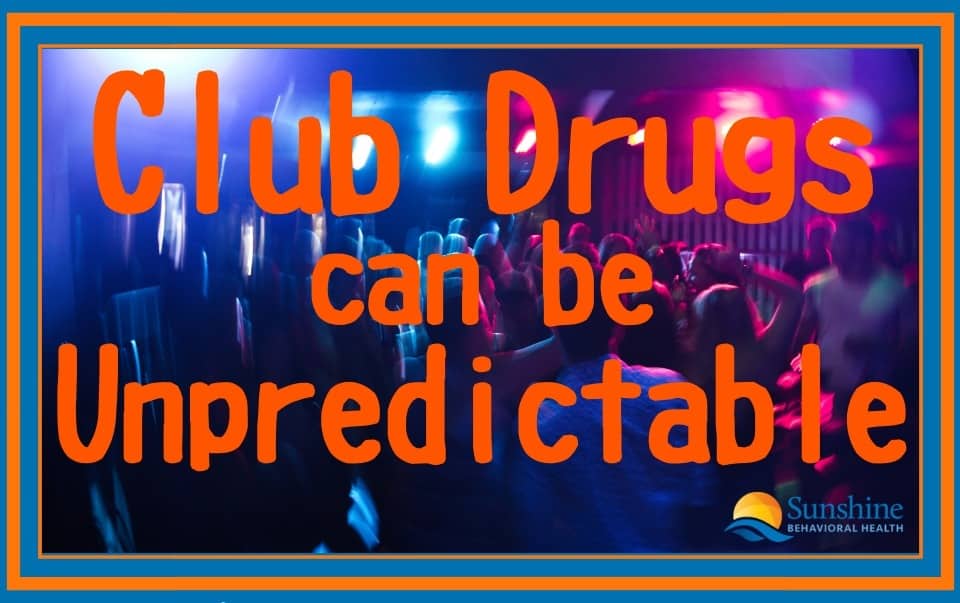 Designer club drugs include many different types of substances, most of them are pills of the stimulant varieties. These drugs have been known to give the user euphoric sensations and boosted energy. However, they also lead to reduced inhibitions, among other side-effects, which make them very common for parties and clubbing. Keep reading to find out more about effects from these drugs and the types of club drugs.

What Are Some Types of Club Drugs and Effects From Them?

There are various types of club drugs everyone should know about. In addition, you should learn how each drug affects the user as well. The club drugs can be extremely dangerous for any user.

What Should Be Known About Methylenedioxymethamphetamine (Molly, X, E, Ecstasy or MDMA)?

This is an amphetamine drug which will last between three and six hours. It allows the user to party and dance for the entire duration of the drug. This drug is also a milder hallucinogen. Some of the negative side effects of using this drug include hypertension, risk of dehydration, increased in body temperature and heart failure. When someone is abusing this drug long-term, it can lead to effects such as depression, paranoia, and anxiety. It can also cause issues with sleeping, memory loss and confusion as well. If you have been abusing drugs like MDMA, treatment is available.

What Should Be Known About Methamphetamine (Meth, Crystal, Ice or Speed)?

Methamphetamine is taken in many ways. It can be smoked, injected, taken in oral form or even snorted. This is a stimulant which strongly affects the central nervous system. Those who use this drug may experience loss of appetite, increase in their physical activity, excitement and agitation. Long-term users of this drug may have severe weight loss, paranoia, psychosis and major damage to their heart and brain. If you have been abusing Methamphetamine, know there are rehab center programs to help you overcome the addiction.

What Should Be Known About Gamma-Hydroxybutyric Acid (GHB)?

GHB is used often in date rapes. This drug causes depression on one’s central nervous system for a maximum of four hours. The person who takes it will experience a combination of euphoria and sedation. The effects are strong and even more powerful when someone is also consuming alcohol. GHB slows down the heart rate and breathing, which also increases the risk of overdose.

What Should Be Known About Ketamine (Special K)?

This club drug is used often in veterinary offices to tranquilize animals. This can cause hallucinations just like PCP does. Those who use this drug long-term may experiences learning and memory issues. They may lose motor functions. In addition, the user may experience depression, impaired reaction times, increased blood pressure and different types of cardiac issues.

What Should Be Known About Rohypnol (Roofies)?

Similar to the drug, GHB, Rohypnol is also used in date rapes. These drugs are easily dissolved into beverages and don’t have a taste or smell. In addition, the person they are used on will develop amnesia, which is amplified even more when consuming alcohol. Roofies can cause dizziness, confusion, hallucinations and decreased blood pressure as well.

What Are Some Of The Health Dangers Club Drugs Cause?

While club drugs do cause the effects mentioned above, there are some other dangers of these kinds of drugs as well. For one thing, they are very addictive. They can cause psychological and physical withdrawal symptoms. In addition, since many of the club drugs are made illegally, the side effects do vary. This would mean even someone who has used a certain type of club drug many times could still have a serious reaction the next time they use. Use of club drugs could lead to severe health issues or even be fatal due to overdose.

If you have become addicted to club drugs or you know someone who has, treatment is available. Even if you haven’t become addicted yet, but have experienced the negative side effects mentioned above or want to prevent those from happening, you can get help.

Questions or concerns about Club drugs?  If so, get your questions answered today.  Contact us with any concerns you may have.