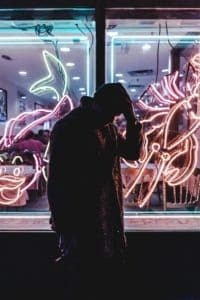 I can still vividly remember the day when I accepted that there might be something different about the way I responded to social interactions. A simple remark has the power to send me into isolation for days. Surviving university was difficult for me. I studied on my own, I had no friends, and always slept in my dorm. My classmates thought I was just shy. When I finished my degree, I struggled to get a job because I was too scared to be interviewed by a potential employer.

Then, when I was least expecting it, I got the opportunity to interview with a publication. It was nothing short of a dream job and I should have been over the moon about it. But, the night before the interview, I found myself creating imaginary scenarios that made my panic levels skyrocket, and the next thing I knew, it was six in the morning. Of course, this set me on edge, and knowing that I had blown my chance,  I spent the next four hours crying on my bed instead of showing up for the interview.

Right then, I knew I was more than just a shy person. Acceptance came easy but submitting to treatment was difficult. I looked online if there were any therapists in my area. It took me four months to finally get the courage to call them up, but I dropped the call as soon as I heard the stranger on the other end of the line.

My family was integral to me accepting my condition. My sister was the one who held my hand throughout the battle against me. She was the one who encouraged me to get tested. She was also the one who admitted me to therapy. I knew I could be more if I could overcome the fear of doing great things, I knew how to do them, and I was capable of doing them, but I kept holding myself from doing so. I normally start something but fail to follow through. That was when the people I love and people who care about me decided to step in. And I realized I needed help, and the first step was acceptance, not just of the condition but also of the help that people offered.

Finding Myself During Therapy

After knowing that I indeed have a social anxiety disorder condition, it became clear that I have to go through therapy. I could not allow myself to spiral into the depth of depression and loneliness. And this resulted in much more anxiety at first. But my support system was strong.

Connecting to people with a similar condition

I was also introduced to people with a condition similar to what I have. We constantly share experiences and milestones. We also practice how to react to situations. Over time, it became easier to apply what I learned in real life. Having a group of people who understand you did lessen the fear of facing other people. Talking to them conditioned my brain towards a more confident way of seeing real-life situations.

I need to train myself to be confident, or at least help others realize my confidence in me. My family was also by my side. They gave me reassurance. They walked me into therapy during times when I gave up. There were days when I felt like there was an endless therapy session ahead of me before I finally learned to integrate and function with society, and then I crumbled into a ball of fear again. I might have given up at some point, but my family never gave up on me. I continued talking to people about the difficulty I faced.

After twelve therapy sessions, I discovered that I could break my anxiety cycle when I had a hobby I could work on. I started picking up watercolor painting. I immediately fell in love with the process. I began drawing flowers and applying colors; the next thing I knew, I already had tens of finished artworks. But I was so apprehensive about showing them to people.

I continued working on the artwork during idle times when I am most prone to having attacks. What I love about art the most is discovering that I have the ability to create something beautiful. From watercolor, I am now learning to paint with acrylic. I am also planning on working with oil. Recently, I got offered by a friend to have my designs printed for their shop.

Aside from taking up a hobby and talking to people, it also became an important part of my healing: I did not rely on medicines. I knew that turning to medicines every time I got anxious would start another unending cycle of addiction. I knew I would not be totally cured by medicine and that they work only to mask what you are feeling. You will be left with the same feeling when they rub off. I needed holistic healing. I knew that I could do better with therapy without reliance on medicine.

I can honestly say that the whole ordeal was not easy without the help of people who cared for and assisted me. This is the reason why I am currently working to return the favor by helping other people with social anxiety disorder. Having gone through the condition and overcoming the disorder, I truly understand how difficult it is to live in a society that you fear. It is important that we talk it out. It is important to care about what other people feel. Accepting that something could be wrong with you is difficult, but accepting help can get difficult, and I want to help make it easier for people to get tested and admitted to therapy.

They say no man is an island, and I realized this is true. I cannot just continually lock myself in my room out of fear of people. I cannot procrastinate all day thinking about what other people might say about me. I cannot just give up on my dream when I know I can make it. I cannot let social anxiety stop other people and me from moving forward in life.