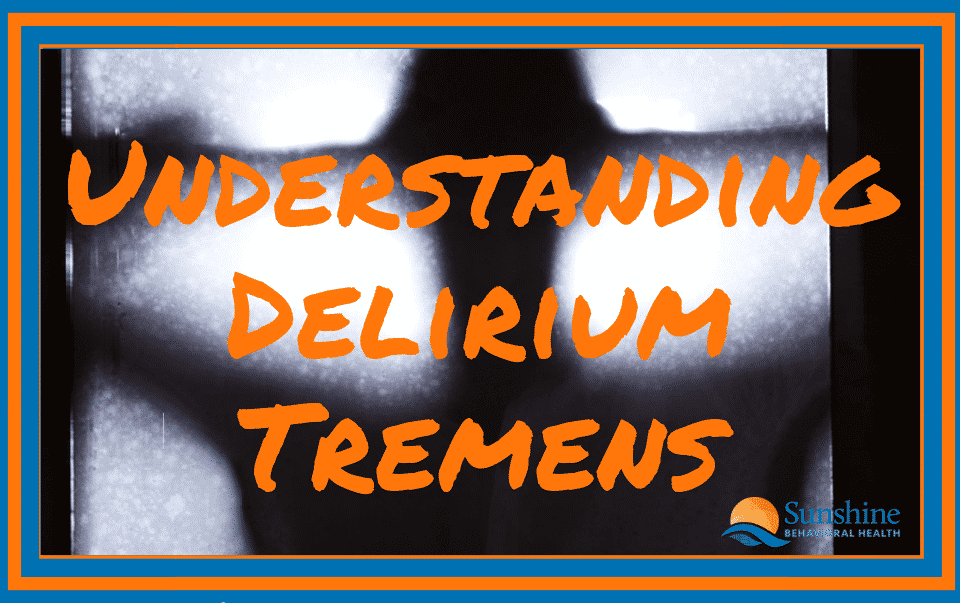 Alcohol-addicted individuals who are trying to quit their dependency need to go through the detoxification process before starting treatment. The detox stage involves cessation of alcohol consumption to completely rid the body of all traces of alcohol.

What is Delirium Tremens?

Delirium Tremens (DTs) is a form of severe alcohol withdrawal. It is generally characterized by sudden and extreme confusion, autonomic hyperactivity, and even cardiac arrest. Delirium tremens meaning “trembling delirium” in the literal sense, was first acknowledged as far back as 1813 as a delirium related to the severe abuse of alcohol.  This condition was named and initially discussed by Kent Physician Thomas Sutton who published the book, “Tracts on Delirium Tremens, on Peritonitis, and on Some Other Internal Inflammatory Affections, and on the Gout.”

Other factors that may increase the likelihood of experiencing delirium tremens also include prior history of delirium tremens and/or seizures and detox, concurrent medical condition, heavy and prolonged alcohol intake, and presence of structural lesions in the brain, among others.

What is Delirium Tremens Symptoms?

Alcohol-addicted individuals who are suffering from delirium tremens commonly experience the following signs and symptoms:

DTs from drinking beer and other alcoholic drink excessively can also cause seizures even with the absence of the other symptoms mentioned above.

How Long Does Delirium Tremens Last?

The symptoms of delirium tremens usually manifest and peak within 2 to 4 days after the last alcohol consumption.  In some instances, however, alcohol-dependent individuals may experience symptoms of DTs up to a week to 10 days after sudden cessation of alcohol.

How is Delirium Tremens Evaluated?

The occurrence of delirium tremens is evaluated by a health care practitioner through the conduct of physical exam and administration of medical tests.  For the physical exam, the medical practitioner will be on the lookout for the following signs:

The patient may also undergo the following clinical tests:

How is Delirium Tremens Treated?

Regardless of the many delirium tremens stories by patients, you may have read on the internet, delirium tremens treatment at home is generally not advisable. DTs is a medical emergency that requires immediate hospitalization.  Note that despite appropriate treatment interventions, delirium tremens deathrate still ranges between 5 percent to 15 percent.

The goals of treatment for delirium tremens include the following:

During hospital confinement, the patient’s temperature, blood pressure, and other vital signs, results of blood chemistry, and levels of body fluid shall be regularly checked and monitored by the medical team.  He will also receive medications such as the benzodiazepines barbiturates, or lorazepam to:

Once the patient recovers from the life-threatening symptoms of delirium tremens, preventive treatment strategies like the following begin to maintain long-term sobriety:

How to Prevent Delirium Tremens?

Considering that the primary cause of delirium tremens is excessive alcohol consumption, the most effective way to prevent its occurrence is by immediately addressing alcohol use disorder. If alcohol dependence is recognized and treated before it becomes a serious and recurring problem, severe withdrawal symptoms can be evaded.

Young adults who are starting to experiment and engage in frequent drinking sessions should be immediately dealt with.  Their families and significant others should help them seek appropriate interventions to help address the drinking problem early on.

For heavy alcohol drinkers visiting a hospital or other medical facilities, honesty is key. They should disclose their drinking habit to the doctor or medical practitioner helping them even if they are in the hospital for some other reason.  This way, the doctor can monitor and readily address early signs of alcohol withdrawal should they occur.

Do you still have questions or concerns about Delirium Tremens?  If so, we are here to help.  Contact us today to get all of your questions answered.