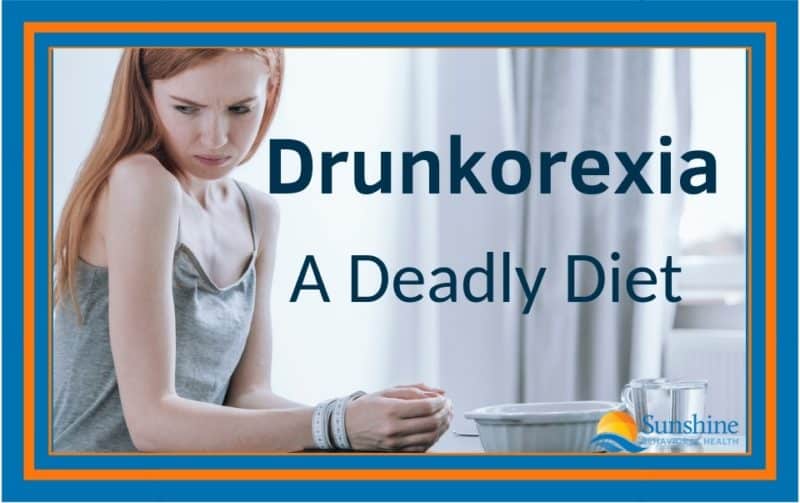 Have you ever been out at a club or bar and noticed someone who seems to be impossibly thin? They don’t have all the extra weight that we typically associate with those who drink a lot of alcohol, but they drink like crazy. So, what’s going on, and how are they so thin? Some very thin binge drinkers struggle with a condition called drunkorexia. It’s real, and it’s dangerous.

The name drunkorexia is a nonmedical term that combines the word drunk with anorexia, an eating disorder in which people often starve themselves. People who struggle with drunkorexia restrict their food intake or even starve themselves to drink alcohol. They do this to binge drink without consuming many calories or gaining weight. Although those who engage in this practice think it’s a foolproof plan, they’re doing more harm than good in reality. The practice can cause serious and even deadly health problems.

While the term may seem strange, many people are starving themselves to drink, including many college students. In one study, about 21 percent of college students admitted to engaging in drunkorexia. The study further revealed that fraternity and sorority members are more likely to engage in drunkorexic tendencies.

As seen from the study, drunkorexia affects both women and men. In women, the number one reason for practicing drunkorexia was to avoid gaining weight and still be able to party with other people. For men, drunkorexia is a faster and more effective way of getting drunk, saving them money they would have otherwise spent on buying food and additional alcohol.

A study published in the Journal of American College Health reported that college students who had an eating disorder or exercised excessively were five times more likely to experience binge drinking episodes. The practices are often intertwined. The data from the study illustrated that there is a strong correlation between binge drinking and drunkorexia.

Even if people who use the practice are convinced that their reasons are justifiable, the health issues relating to drunkorexia demonstrate how dangerous it is.

Intentionally starving yourself and abusing alcohol can lead to serious physical and psychological consequences. If you drink while you’re malnourished, you may experience:

When an individual consumes alcohol on an empty stomach, ethanol, a component found in alcohol, enters the blood faster. This raises the person’s blood alcohol quickly, probably too quickly.

What may appear to be a harmless practice can quickly turn into a hazardous obsession. Skipping meals before drinking heavily can lead to vomiting, passing out, confusion, and alcohol poisoning.

Women face a greater risk of developing health complications associated with binge drinking. This is because women’s bodies do not metabolize alcohol like men’s. Drunkorexia affects a woman’s body more intensely and quickly than a man’s.

A drunkorexic faces a higher risk of developing an addiction problem or a severe eating disorder.

Despite the consequences, people still cling to the practice. They believe that by binge drinking and staying thin, they’ve found a balance. But, if they don’t resolve the problem early enough, they may be creating irreversible consequences.

What Are the Signs of Drunkorexia?

Binge drinking and skipping meals are not healthy practices; nonetheless, many people engage in them without necessarily having substance abuse or body image issues. It could be difficult to know if someone is struggling with drunkorexia.

One sign of alcohol abuse could be if people are experiencing serious problems at home, work, or school because of drinking excessively. Recurring patterns of such behaviors can be indicators that the drinking or disordered eating could be more than just an occasional problem.

Eating disorders can occur if people consume little to no food every time before drinking. Sometimes, they may openly talk about their plans to reduce calories. If this is persistent and interferes with their day-to-day activities, then it could be a sign of a deeper problem.

How Can You Help People Struggling with Drunkorexia?

If you suspect that a family member, friend, coworker, or acquaintance is struggling with drunkorexia, there are a number of things you may want to consider, including:

There are also some other things that you might want to avoid doing when talking with people with drunkorexia:

If you or loved ones are struggling with drunkorexia, it’s important to seek treatment for both the substance abuse disorder and the eating disorder. When two conditions such as these occur at the same time, the condition is referred to as a dual diagnosis or a co-occurring disorder. The only way of overcoming both disorders is by treating them simultaneously in an inpatient rehab. A good course of action would be to treat drunkorexia in a dual diagnosis rehab.

A popular technique used to treat dual diagnosis is CBT (cognitive behavioral therapy). CBT focuses on a person’s thoughts, attitudes, and beliefs in relation to their behaviors and feelings. This therapeutic technique aims to teach people healthy coping mechanisms to help them deal with the issues that caused them to develop the disorders in the first place.