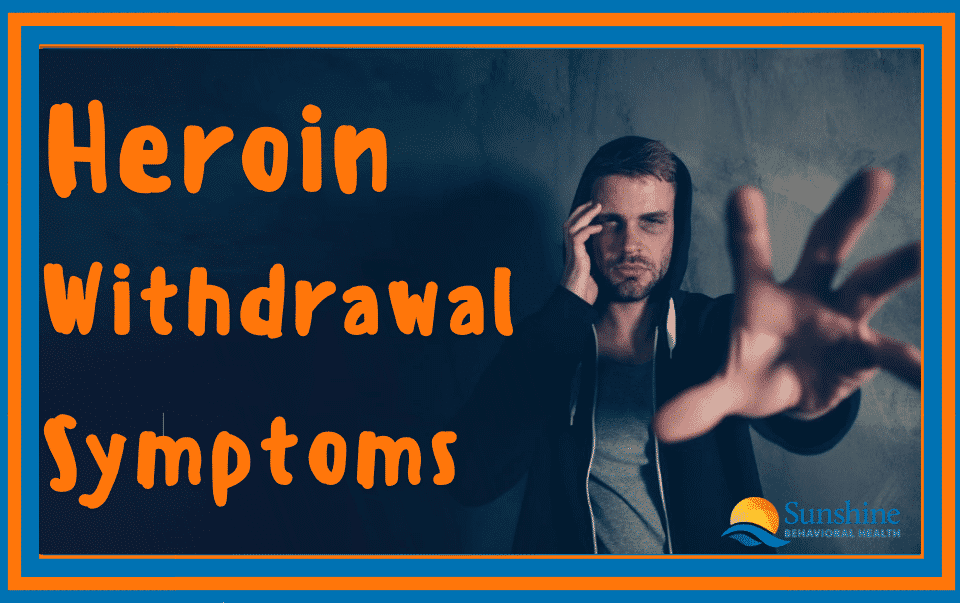 Withdrawing from heroin may cause symptoms similar to the flu (influenza).

Drugs such as heroin affect the reward system in the brain, thereby increasing one’s tolerance to their effects with continued use.  As a result, people dependent on heroin have to constantly increase their dosage to experience the same highs they experienced before.  If they stop using the drug altogether, they may experience heroin withdrawal symptoms.

What Are the Symptoms of Heroin Withdrawal?

Drug-dependent individuals usually start experiencing heroin withdrawal symptoms within six to twenty-four hours after their most recent use of heroin. In some ways, heroin withdrawal resembles withdrawal from prescription opioids. One difference is that heroin leaves the body faster compared to other painkillers, so withdrawal occurs more quickly.

To many people, heroin withdrawal feels like a bad case of the flu. The discomfort and pain of withdrawal could last for weeks and its symptoms are typically at their worst by the second or third day.

Some common black tar heroin withdrawal symptoms or symptoms related to the withdrawal from other types of heroin include:

Signs and Symptoms of Heroin Withdrawal

Aside from these, heroin may worsen the following mental conditions:

Depending on the length of drug use and the level of usage, individuals who are recovering from heroin addiction might suffer from post-acute heroin withdrawal symptoms. Extended heroin usage may alter the chemical make-up of one’s brain.  These behavioral and mood changes may continue for months, even after other withdrawal symptoms end.  A few of these far-reaching symptoms may include irritability, insomnia, fatigue, depression, and anxiety.

Heroin detox may provide a safe space for former heroin users to manage their withdrawal symptoms.  Complications from heroin withdrawal may occur and gravely injure people who are undergoing detox, so medical supervision is a must.  People undergoing heroin withdrawal may also become severely dehydrated or experience problems relating to vomiting. It is always best to seek medically supervised and managed medical detox.

Inpatient program doctors also need to look for psychological withdrawal effects such as depression and anxiety.  Relapse and self-harm may also occur during the withdrawal period. Medical detox after heroin use can decrease the risk of complications.

Methadone is a low-strength and slow-acting opioid utilized to taper individuals off heroin and other opioid drugs. It can help avert withdrawal symptoms.

Buprenorphine is one of the more common drugs prescribed for patients undergoing heroin withdrawal.  It may curb cravings as well as physical symptoms such as muscle aches and vomiting.

Naltrexone blocks brain receptors which react to heroin and other opioids. This drug is not sedating or addictive but may help curb cravings. Naltrexone works best for people who are already finished with detox.

Since it is a short-acting type of opioid, heroin takes effect rapidly but also leaves the bloodstream quickly.

Taking such symptoms into consideration, heroin detox should start even before the drug leaves the user’s system and should usually last around five to seven days.  If the person in detox is heavily dependent on the drug, his or her detoxification process might take longer than usual and perhaps last for around ten days.

Withdrawal might make addiction a hard cycle to break. This does not mean that ending heroin addiction is impossible.  Substance abuse treatment facilities offer various outpatient and inpatient detox options and recovery programs.

Inpatient detox includes 24-hour supervision and observation from designated medical professionals in addiction treatment facilities. Such care improves the chances of recovery from moderate or severe levels of heroin addiction.

Residential treatment in rehab centers is ideal for those with severe addictions or those with underlying mental conditions. This type of treatment offered by substance abuse treatment centers can be long-term or short-term.

Long-term treatment can last for three to six months or more, depending on the severity of a person’s condition.  On the other hand, short-term care can run from three weeks to six weeks or other short periods of time. Again, the duration of short-term care depends on the person’s need and condition.

Outpatient recovery treatment options require participants to meet regularly with doctors, therapists, and other treatment providers for counseling and checkups.  Recovering people in outpatient programs can live and sleep in their homes. This treatment program may work for people who have completed inpatient rehab but still need help maintaining their sobriety in the outside world.  This treatment also may be more effective if people have the support of their family and friends.

Treatment programs and aftercare services may include the following:

Management of Withdrawal Symptoms at the Heroin Detox Facility

According to The American Society of Addiction Medicine (ASAM), approximately 591,00 Americans battled heroin addiction in 2016. The Drug Enforcement Administration (DEA) classified it as a Schedule I drug, meaning it has a high potential for abuse and no medicinal worth.

Various medication options may help people treat their dependency on heroin. Some of these treatment options can be used during detox to help curb uncomfortable emotional and physical withdrawal side effects while curbing a person’s cravings.  Ideally, the detox process should occur under the supervision of professionals in heroin detox facilities.