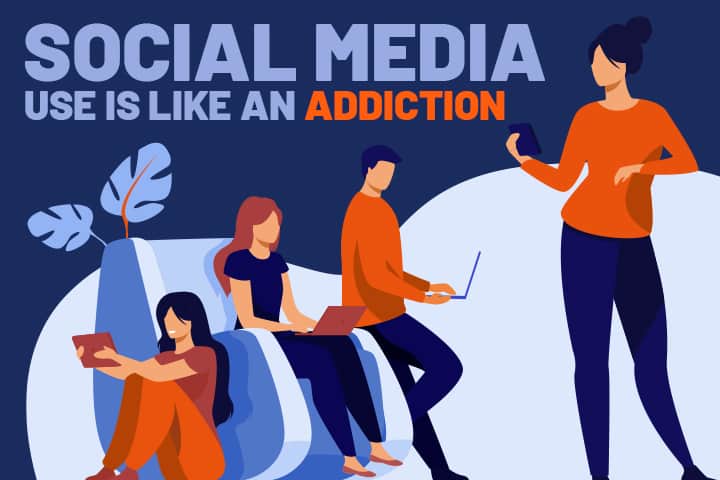 Black Monday? Some social media users may have felt that way on Monday, October 4, 2021, when they couldn’t access Facebook, Instagram, and WhatsApp. The services returned later in the day.

This outage was an impediment for people who use the platforms for professional reasons and a nuisance for those who use them for personal ones. For others, the temporary blackout may have created more intense reactions.

That’s because some people don’t just use social media occasionally to check in with loved ones or keep themselves entertained during slow times. Instead, they feel compelled to use social media and when they can’t, they don’t feel right.

Compulsions like this sound like addictions to substances, where people feel driven to use drugs or alcohol and suffer when they can’t get their hands on them.

Ongoing debates argue whether excessive social media use and other behavioral compulsions are addictions in the same way alcohol or drug misuse are. But whether it’s technically an addiction, compulsive behavior does share some characteristics with drug and alcohol misuse.

Using social media, drugs, or alcohol takes time, sometimes a lot of time. This is time people could be working, studying, spending time with family members or friends, or engaging in other responsibilities or hobbies. When they’re not using, people might be preoccupied with thoughts of their addictions or compulsions, so they’re still not really living in the present.

Substance use and social interaction can both trigger the release of dopamine, a chemical messenger that transmits messages among nerve cells. When people are doing or thinking about something that excites them, it activates dopamine pathways known as reward pathways. To experience these rewards again, people feel compelled to use social media and substances again.

While social media and substance use can prompt brain activity, they can also change brain structure. Frequent users of social networking sites display anatomical changes in their brains that are associated with increased impulsivity, much like people who are heavy users of drugs and alcohol.

Are associated with depression.

Many people are concerned if they can’t find their phone, but if they feel full-blown panic and anxiety when they’re not using social media, they may have a problem. Similarly, if people who’ve been using drugs and alcohol can’t obtain the substances, they might wonder how they’re going to function.

Fortunately, though, people can manage their use of substances and social media by:

Other people practice moderation, which means they use substances and social media but in limited amounts. Substance users might give up alcohol for a certain amount of time or after a certain number of drinks or drug doses. Social media users might limit themselves to visiting one site a day or setting a time limit on their visits.

Distant devices and substances are more difficult to use. People could try placing their alcohol and devices in different rooms. If they want to use them, they’ll have to work a little, which could make them question how much they really want them.

Boredom sometimes drives people to use social media and substances. If they have other things to do, people might not be as tempted to reach for their phone or a pill or alcohol bottle. As an added bonus, hobbies often involve other people and social interaction, boosting dopamine levels without the use of drugs, alcohol, or social media.

People might be so consumed by using social media, drugs, or alcohol that they worry what they’ll do without them. When they try to quit using these things compulsively, they might not be able to because they feel so bad. They might want to consider seeking professional assistance that can help them understand why they want to use such substances and also help them develop ways to live happy lives without them.

Technology can provide many benefits, but if technology (or drugs or alcohol) interfere with our lives instead of enhancing them, assistance is available.

ncbi.nlm.nih.gov – Association Between Social Media Use and Depression Among U.S. Young Adults

sitn.hms.harvard.edu – Dopamine, Smartphones & You: A Battle for Your Time