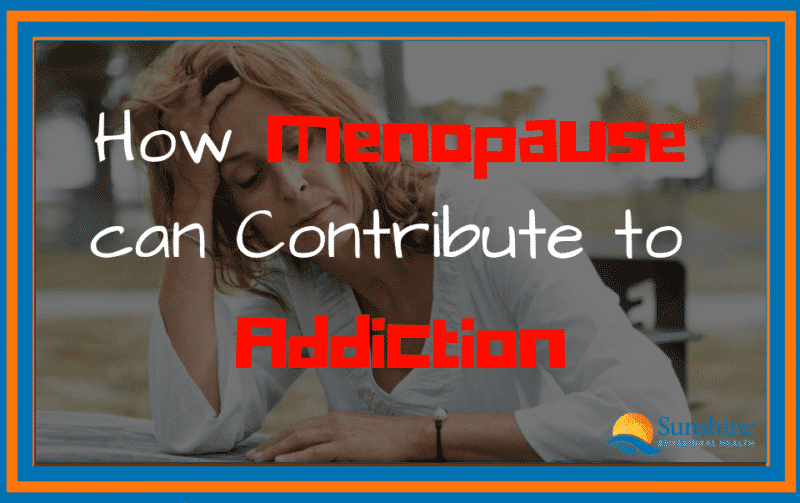 Menopause is a stage in a woman’s life when she experiences physiological changes that may cause significant shifts in her physical and mental health. It often happens between the ages of forty-five and fifty-five, with fifty-one being the average age.

Perimenopause typically begins when a woman is in her forties, but can begin in her thirties.  Perimenopause and menopause both cause a woman’s estrogen and progesterone hormone levels to drop.

During perimenopause and menopause, changes in hormone levels are often responsible for a myriad of mental and physical symptoms, such as:

These symptoms can last for years as the body adjusts to the hormonal changes that are occurring. Women going through perimenopause and menopause often experience distress because of these symptoms. Mental distress might trigger a substance abuse problem that includes physical and psychological effects.

Some symptoms of perimenopause and menopause that may lead to psychological distress include the following:

Women are two to four times more likely to experience depression during perimenopause and menopause. This might be caused by the thought that they are getting older and can no longer have children, coupled with the effects of the symptoms.

Perimenopause and menopause can cause many changes in the body, and this may make women feel less attractive. This can also be aggravated by hormone changes that might cause hair loss and weight gain.

Declining estrogen levels can have a significant effect on emotions. Low levels of estrogen can cause irritability and mood swings.

Women experiencing perimenopause and menopause may be eager to relive their younger days. These thoughts of their youth can trigger feelings of lethargy and may affect concentration, which could make it more difficult to complete day-to-day tasks effectively.

How Perimenopause and Menopause Contribute to Addiction

People who abuse drugs and alcohol often do so because they are seeking relief for their physical pain or mental distress. Women going through perimenopause and menopause might be more susceptible to substance abuse due to the discomfort caused by the dramatic changes taking place in their bodies including:

Alcohol and painkillers may be seen as viable treatment options for perimenopausal and menopausal symptoms. Women might use drugs or alcohol to counter insomnia and reduce mental distress. They might also abuse pain management medication during these times to treat their physical symptoms.

Women might use alcohol and drugs in an effort to find relief for the mental distress caused by perimenopause and menopause. Even though many people know that drugs and alcohol only produce short-term effects, the level of mental distress may compel people to use them for temporary relief.

If women abused drugs and alcohol before perimenopause and menopause, it is possible that the amount and frequency of substance abuse may spike with these conditions.

The adverse effects of perimenopause and menopause can be severe and far-reaching. The abused substances can even trigger a vicious circle. Symptoms can prompt people to use drugs and alcohol, but the substances can create more serious symptoms. If the symptoms become more severe, they could drive women to abuse more drugs, which could worsen their substance abuse problem. Some of the effects of drug abuse might be:

Alcohol and drugs provide only temporary relief for people undergoing distress. In the long term, they make mental conditions worse. Substance abuse can cause friction between users and their loved ones, causing further problems that can aggravate anxiety, depression, and other mental problems, which could trigger people to abuse drugs and alcohol.

Inability to function without drugs

Perimenopause and menopause can cause symptoms such as irritability and problems with concentration, and drug use can worsen problems to the point where people feel they cannot function without using drugs or alcohol. Every time people experience such symptoms, they might feel compelled to reach for alcohol or their drug of choice. This can worsen their dependency problems.

Alcohol and drug abuse can worsen physical and mental symptoms of perimenopause, menopause, and other conditions. The severity can be much worse than the symptoms they experienced before abusing the substances. This can lead to serious issues with dependency.

Coping with Changes During Menopause

Substance abuse during perimenopause and menopause often leads to adverse effects. But, there are healthy ways to deal with the physical and psychological symptoms:

Sometimes, perimenopausal and menopausal symptoms can be so severe that some women take additional steps to lead productive lives and handle day-to-day challenges including:

Some people have questioned the use of hormone replacement therapy for menopausal women after some research indicated that it could be risky for women and could potentially trigger breast cancer and other issues. However, a more recent long-term study found no indications that using supplemental hormones can cause cancer or lead to death. Despite the study, the North American Menopause Society (NAMS) encourages women to use hormonal supplements carefully and work with their doctors and medical providers if they are using them.

If women are already addicted to alcohol, prescription medications, or other drugs, they might want to consider visiting a luxury drug rehab center. The longer people allow their substance abuse problems to persist, the more severe their symptoms can become. This can make it much harder to treat an addiction or its symptoms.

The symptoms associated with perimenopause and menopause can be severe enough to compel people to abuse alcohol, prescription drugs, or narcotic drugs. Consider seeking professional help instead of self-medicating with drugs or alcohol. Professional assistance can help reduce complications and minimize the effects of the symptoms so you can carry out your daily tasks and live your life.