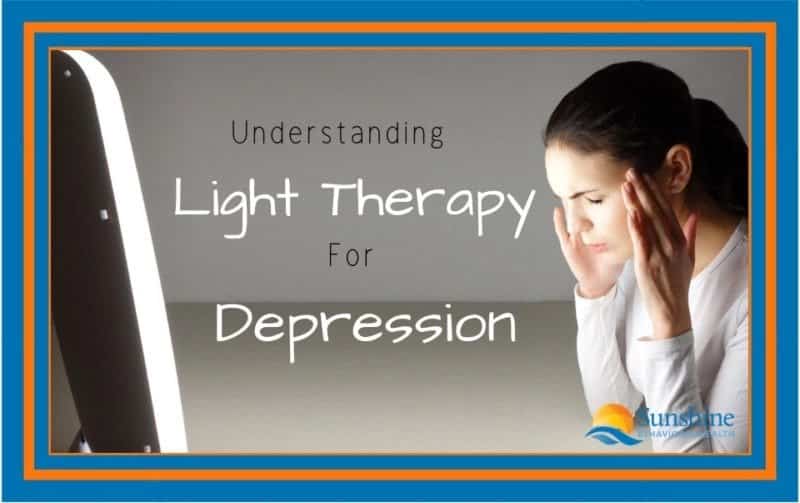 Common symptoms of winter depression are:

Unlike nonseasonal depression, symptoms of SAD aren’t felt all year. They usually begin in autumn and tend to disappear at the onset of spring.

What is Light Therapy?

Light therapy, also known as light box therapy or blue light therapy, involves working or sitting near a bright light that typically mimics daylight for a given amount of time.  It’s believed to ease depression symptoms by impacting chemicals released by the brain, which affect a person’s sleep and mood.

Research: The Effectiveness of Light Therapy

Clinical trials studying the effectiveness of light therapy for individuals with MDD (Major Depressive Disorder) have been positive.

In one study that involved 50 inpatients diagnosed with severe MDD, researchers found that when they combined venlafaxine, an antidepressant, with light therapy, the patients experienced “significantly lower HDRS (Hamilton Depression Rating Scale) depression scores” as compared to when they took the antidepressant alone.

In another trial that lasted 8 weeks, 122 participants with non-seasonal MDD reacted positively to light therapy combined with SSRI fluoxetine or light therapy on its own.  The treatment was well tolerated and effective among the participants.

Kripke, a professor of psychiatry at the University of California, San Diego, together with his colleagues, carried out a 1-week study in 1992. The study involved veterans diagnosed with depression. Patients with depressed forms of bipolar disorder or nonseasonal major depressive disorders were admitted to the Veterans Affairs Medical Center.  25 patients were randomly treated using bright light therapy of about 2,000 to 3,000 lux, while 26 patients were randomly exposed to dim red-light treatment in a placebo.  In just one week, the 25 patients placed under the bright light treatment had an 18% reduction in their depression scores, whereas the other 26 who were placed in a placebo didn’t show any improvements whatsoever.

According to most studies, almost 75% of people with SAD experience significant improvements after using light therapy.

Light therapy, when used consistently, eases the symptoms of SAD and helps you feel better.

You don’t require a prescription to purchase a light box. However, it’s advisable to ask your healthcare provider or doctor whether you should use this technique and the type of lightbox that’s suitable for your needs. Before treatment commences, discuss with your doctor any special precautions.  Also, follow the manufacturer’s instructions.

A light box should:

Recommendations for using a light box include:

Side Effects of a Light Box

Although the side effects are generally mild and uncommon, users sometimes experience:

Sitting or working farther away from the light and reducing the treatment duration usually eliminates the effects.

What Conditions Can Light Therapy Be Used For?

In addition to treating Seasonal Affective Disorder, light therapy has other uses, including:

When to Use with Caution

It’s always best to talk to your doctor before using light therapy, especially if:

What Determines the Effectiveness of Light Therapy?

How to Benefit from Light Therapy

To help make light therapy a success, you can take the following steps:

Sticking to a routine will maximize the benefits of using light therapy. If you have a tight schedule, you can skip a day or two, however, monitor your progress.  With your doctor’s help, you can devise a way to schedule your daily sessions.

Talk to your doctor before buying a light box. That way, you’re sure to get a box that’s safe and effective. By doing the research before getting a lightbox, you’ll ensure that you buy a box that has the right type of light with the recommended brightness.

If you stop your light therapy as soon as spring starts or you interrupt the sessions during winter, any improvements you may have made may be reversed, and your symptoms may return.  Track when you begin during fall and when you stop in spring. Hence, you’ll be able to know when to start and stop come the following year.

To improve your condition, you may require additional treatment. Your doctor will advise you on other treatment options such as psychotherapy and antidepressants.

With light therapy, you’ll see improvements in just a few days. However, noticeable changes might take 2 or more weeks, depending on an individual.