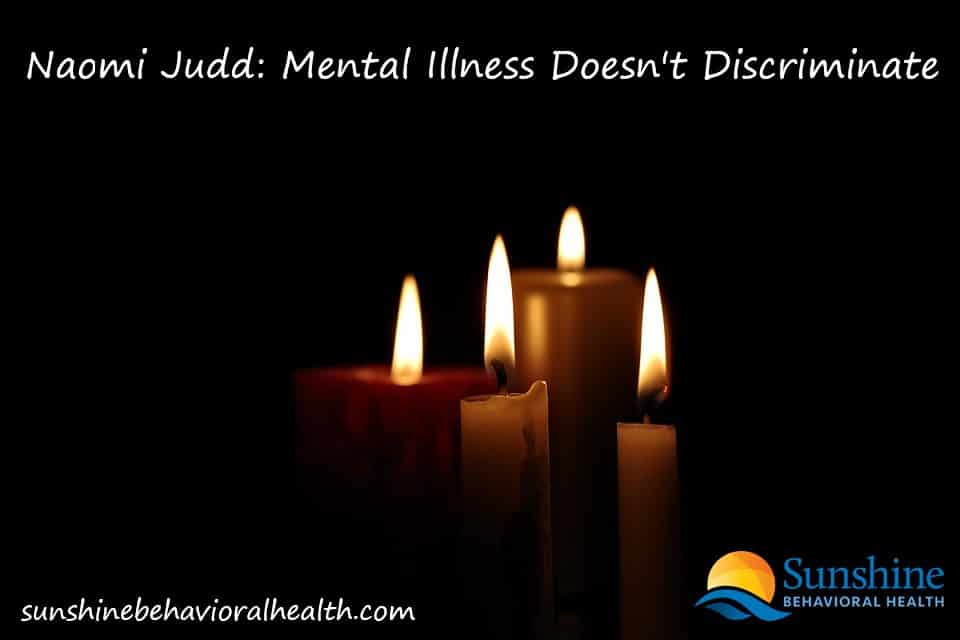 She took her own life after battling with mental illness. Her family later revealed that she used a firearm to commit the act.

Music and mental illness both played prominent roles in Naomi Judd’s life. A former nurse, she and Wynonna formed the Judds and success followed.

Why Not Me, their first full-length album was certified platinum, selling more than one million copies. Other commercial and critical success followed, culminating in the Judds’ 2022 induction into the Country Music Hall of Fame the day after Naomi’s death.

Before, during, and after such accolades, Naomi Judd suffered.

Some of this pain was well-known. Naomi was a teenager when she gave birth to Wynonna. Naomi, Wynonna, and later Ashley all struggled financially.

Other pain was longer-lasting and less visible. In her 2016 autobiography River of Time, Naomi described the trauma she experienced as a result of childhood sexual abuse and her ongoing struggles with that trauma, depression, and suicidal thoughts.

The prevalence of mental illness

Such struggles are common. Since the pandemic, they’ve been even more prevalent. People have been isolated, sick, laid off from jobs, concerned about illness and finances, or responsible for sick loved ones, among other worries.

Many have had anxiety and depression. People who already had them might be grappling with worse forms of the conditions.

Coping mechanisms can also kill. Deaths due to excessive alcohol use, drug overdoses, and suicide are often known as deaths of despair.

Such deaths are common. In the United States:

Despair is killing thousands of people every year. What can we do about it?

Understanding mental illness can help people find help for themselves and others.

People might tell people with depression, “You shouldn’t be depressed. You have so much to live for!” But such statements only make things worse. They might make people feel guilty or ashamed. Guilt and shame might prevent people from looking for the treatment they need.

After all, Naomi Judd had a loving family, money, fame, professional success, and artistic achievements. But she also had trauma and depression, two conditions that can be debilitating. For her, they proved fatal.

Maybe her death will show people how anyone can have mental illnesses and that they don’t discriminate. Maybe they’ll help people understand that they’re illnesses, not signs of weakness.

Naomi Judd’s family would prefer to have her in their lives instead of serving as a symbol for mental health. But their loved one’s life and death could be shining a light on mental illnesses and the people who have them.

theboot.com – 36 Years Ago: The Judds’ “Why Not Me” Is Certified Platinum

cdc.gov – Deaths from Excessive Alcohol Use in the United States

nytimes.com – U.S. Suicides Declined Over All in 2020 but May Have Risen Among People of Color