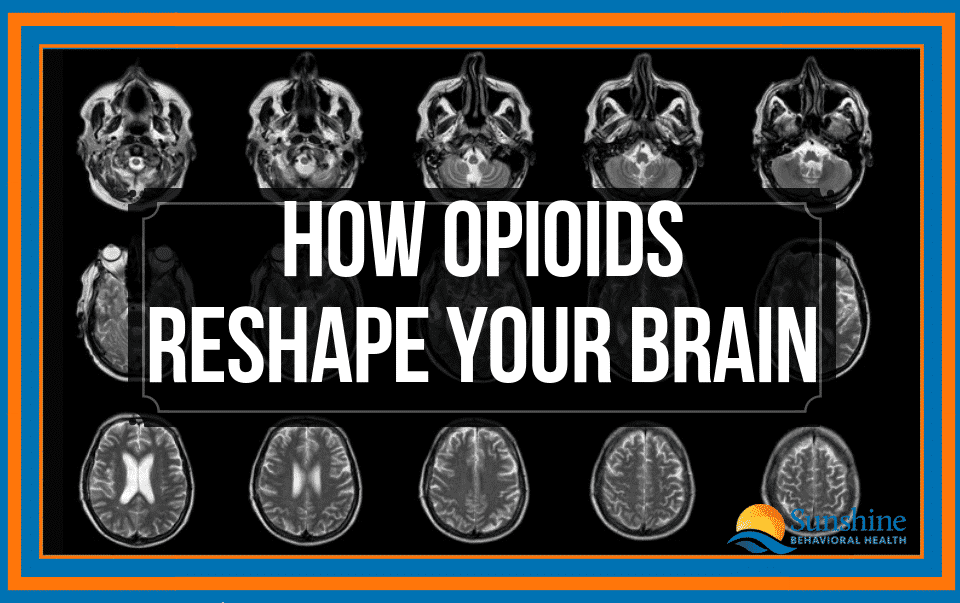 As we grow, our brain also grows and adapts. This is called neuroplasticity, which is not only limited by what we learn in school. Our habits, such as biting the fingernails when stressed or not responding when being confronted, also cut “trails” in our brains that can be challenging to overcome.

The effects of drug habits on our brain is even more dramatic.  This can also be known as the “opioid brain.”

Experts have shared how these changes are seen only with a microscope. The structural changes to the neurons are different for each kind of drug as each substance has its own signature.

The ongoing national opioid epidemic has led scientists to examine further what being addicted to opioid means for the brains. The findings are now being used to help medical experts determine people who have the propensity to get addicted to the substance, and how to best deal with the addiction.

Nobody is opioid-free. Even individuals who have never used heroin or taken prescription painkillers are free from the substance. The reality is, opioids naturally occur. Things like the beneficial effects of acupuncture and runner’s high are based on the body’s natural opioids like endorphins. This gives good feelings.

Looking at a good meal can also activate the brain’s opioid-linked reward circuit. A study was also conducted to outline children’s responsiveness to food rewards, and how this is linked to possible obesity. Thus, even little difference in how the brain responds and senses everyday pleasure can help explain a variety of behaviors, which can range from overeating to possible opioid abuse.

Thus, the risk of opioid abuse is not all about a person’s character. Environmental exposure and genetics have a lot to do with it. A person’s genes, although the exact number of which is still unknown, contributes to the risk of substance abuse disorder.

Disease of the Brain?

When people feel pleasure, such as having sex, eating, or socially interacting, the reward pathway is being stimulated. This triggers the release of dopamine, and opioids act at the start of that pathway.

But opioids do more than just that. Most opioids target the amygdala, which amps drug cravings. This is the almond-shaped part of the brain that has something to do with motivation and emotions.

A team of researchers also found thousands of changes in the brain after it was exposed to an opioid-like substance. This demonstrates the global effect of these substances on brain signaling.

If the brain is hit by high doses of opioids each day for a couple of months, there are certain wires in the brain that will begin to disappear. Unfortunately, these structures are needed for neurons to communicate with each other. Without it, there could be issues on one’s reasoning as well as thinking over problems. This occurrence can be attributed to the fact that the drug is suddenly introduced and then goes away. The brain has to deal with onsets of highs and withdrawals.

The opioid withdrawal symptoms like cramping, intense nausea, shaking, and sweating among many others, is a result of the brain adapting.

During the first use of opioids, the region of the brain related to stress is quieted. However, long-term exposure can cause the brain to supercharge the neurons in that region. When the effects of the drug are taken away, that region causes havoc on the body and produces those uncomfortable and agonizing withdrawal symptoms.

Treatment of an Addicted Brain

There are some brain changes caused by opioid that reverse themselves quickly. But some others take a lot more time.

Patients suffering from cancer who need to stop using prescription opioids are gradually taken off the substance within a span of several weeks. This is to avoid withdrawal symptoms. But this is not what typically takes place with opioid abusers.

Individuals who wish to become drug-free undergo medication-assisted therapies. Buprenorphine and methadone are the common medication being given. Eventually, the use of these stabilizing opioids is reduced.

Experts claim that these drugs are not replacing the opioids, but they help in the recalibration of the neurobiological changes that took place. However, there are other schools of thought that push for the long-term use of the stabilizing opioids to achieve long-term recovery.

In customizing a treatment program for those suffering from opioid addiction, experts suggest that an assessment of the severity of the person’s addiction should be made first. Among the top considerations is the genetic makeup, as there are DNA markers related to severe addiction.

These markers are then utilized to determine the dose of medications including analgesics for the pain and methadone for maintenance. But this is still being evaluated by the FDA.

Nevertheless, experts agree that treatment works. There may be accounts of people whose treatment failed, yet there are more cases of those that worked. The more personalized the treatment is to an individual’s profile, the better are their chances of getting better. Questions or concerns about opioids or opioid addiction?  Reach out to Sunshine Behavioral Health.