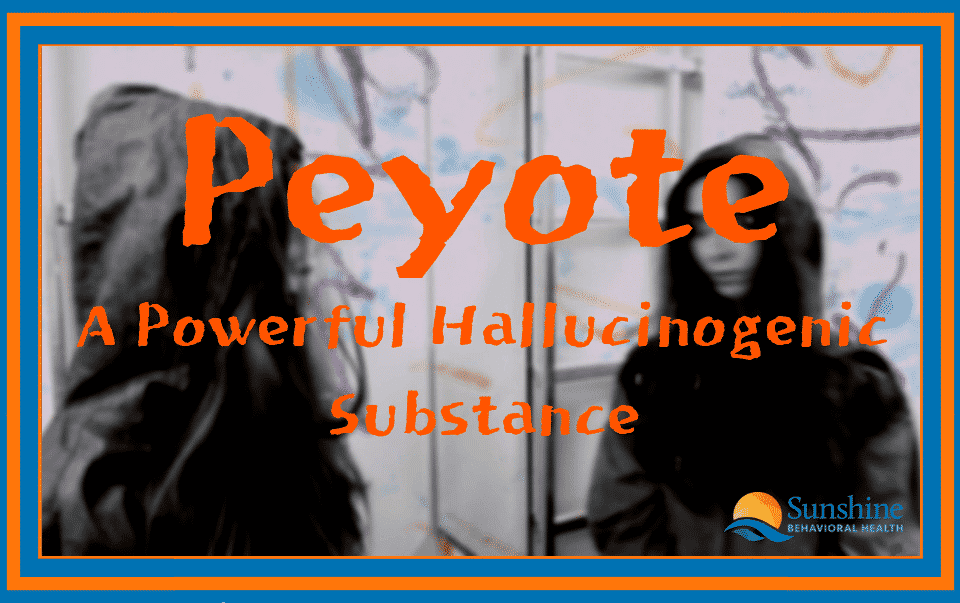 Peyote is a cactus, known botanically as Lophophora williamsii, native to the Chihuahuan Desert in Mexico and southwest Texas, and has been used as a psychoactive drug since ancient times. Peyote contains the hallucinogenic alkaloid known as mescaline. A hallucinogen is a class of substances that alter perceptions and are often used to induce a powerful altered reality.

Peyote and its active ingredient are considered Schedule I drugs in the U.S. This classification designates substances the federal government (the DEA or Drug Enforcement Administration) considers to have no medical value. Their possession, distribution, and use are illegal. Other drugs in this classification are heroin and LSD. A unique exception to peyote’s legal status is that specific indigenous religious organizations may use it in religious ceremonies as it has been regarded as sacred by them traditionally, and used since ancient times.

Hallucinogens as a Class of Substances

Hallucinogens belong to a pharmacological class of substances characterized by inducing an altered state of consciousness when ingested. Alterations occur in mood, thinking, sensory perception and the experience of one’s self, others and the environment. While the word ‘hallucinogen’ suggests the experience of hallucinations, this is not always the case, though there can be the perception of sensory information not based in reality at times. However, their effects significantly alter one’s state of mind to the degree that many have likened effects to those of dream-like states or mystical experiences.

There are two main chemical sub-groups of natural hallucinogens—those similar in structure to mescaline, peyote’s active element, and those similar to psilocybin, often called the ‘magic mushroom’, known also for inducing altered consciousness when ingested. Hallucinogens related to mescaline are called phenethylamines, and those related to psilocybin are known as tryptamines.

Methods of ingesting peyote vary, but commonly it is taken orally by chewing the ‘buttons’ or tops of the cactus that have been harvested and dried. The second most common method of ingestion is drinking a tea or infusion made by infusing water and the dried cactus buttons.

Peyote buttons are also dried and ground into powder (mescaline sulfate) that can be taken in capsules or added to another substance like tobacco or marijuana to smoke. It is thought that a full dose of peyote contains approximately 200-400 mg of mescaline which amounts to about 6 buttons.

The Effects of Ingesting Peyote

The peak effects of peyote occur 2 to 4 hours after consuming it and can last for up to another 12 hours. However, the effects gradually decline in intensity following the peak experience.

As a direct result of peyote’s effects upon the nervous system, brain chemistry and functioning are stimulated to increase their processes. This stimulation results in the altered perceptual and psychological effects of peyote that can include:

Many have experienced negative, even terrifying experiences when intoxicated with peyote. In fact, psychological reactions are considered the primary negative effect of a ‘bad trip’. These reactions can include emotional distress such as intense anxiety fear, panic or terror and upsetting, horrifying or terrifying beliefs and perceptions. Additionally, people with already existing mental health problems can find symptoms of their disorders exaggerated when under the influence and after due to the intense brain chemistry alterations of peyote intoxication. And, some (with and without mental health conditions) have had psychotic episodes that persist after using peyote. These involve hallucinations and/or delusions.

There are medical disorders related to the use of peyote and other hallucinogenic substances that are typically considered psychiatric conditions. These problems can occur after one use of a hallucinogen or after repeated use. They are categorized by the American Psychiatric Association as Hallucinogen-Related Disorders.

These disorders involve problems in daily functioning from impairments in behavior, mood, thinking and/or perception. For example, some may find it difficult to perform daily activities due to the interference of symptoms such as mood swings, depression, anxiety, inability to maintain focus and concentration, and perceptual disturbances.

Some examples of perceptual disturbances include visual interference and distractions such as:

Peyote and the Issue of Addiction

Whether hallucinogens like peyote can be addictive has been long discussed. There are certainly many people who have continued to use these types of drugs for long periods of time, and this presents some important questions. Why do they persist in using them? Is there some sort of addictive process involved?

It is generally thought that hallucinogens are not physically addictive. The markers of physical addiction are cravings, withdrawal, and tolerance. Some users of hallucinogens may ‘crave’ use in some sense of the word—remembering pleasant past experiences and wanting others, for example. However, these urges to use hallucinogens seem dissimilar to cravings for other drugs. For example, cravings for opioids indicate a need to use more to prevent withdrawal. They also indicate that one has biological and neurological triggers to compulsive use.

Other markers for physical addiction do not seem present with hallucinogens either. One does not experience a withdrawal that is eased by more use as in the case of opioid addiction, for instance. Also, tolerance for ever-increasing higher doses does not occur. A dose of hallucinogen continues to be effective as opposed to an opioid dose which must be increased over time to achieve the desired results.

1. Spending a lot of time obtaining the hallucinogen

2. Repeatedly unable to carry out major obligations at work, school, or home due to hallucinogen use

3. Continued use despite persistent or recurring social or interpersonal problems caused or made worse by hallucinogen use

4. Stopping or reducing important social, occupational, or recreational activities due to hallucinogen use

5. Recurrent use of hallucinogens in physically hazardous situations

6. Consistent use of hallucinogens despite acknowledgment of persistent or recurrent physical or psychological difficulties from using hallucinogens

It is notable that over half of the symptoms of addiction can apply to hallucinogen use, and that they involve behavior, and do not directly cite physiology. Consequently, the common view is that while hallucinogens may not be physically addictive, they may cause psychological addiction in some people. This means that some may feel hallucinogens are necessary for their lives, but do not feel a biologically driven need for them.

Seeking Treatment for Peyote Use

Treatment for peyote use is available and effective. If you or a loved one is ready to stop peyote use, consider treatment in a rehab especially able to address hallucinogen use and treat related issues. It is important to remember that rehab is not a one-size-fits-all proposition. You will want to find a treatment program with staff trained in the treatment of hallucinogen use and hallucinogen-related disorders.

If it is time for treatment, you or your loved one are likely having an array of peyote-related problems. We can help you find the appropriate rehab to help. We give free consultations in which we identify your specific clinical needs, preferences and insurance coverage. Then, we make referrals that are appropriate for you or your loved one. Give us a call today if it is time to tackle this problem and get back to the healthy and successful life you deserve. Questions or concerns about Peyote?  If so, contact us to get your questions answered.