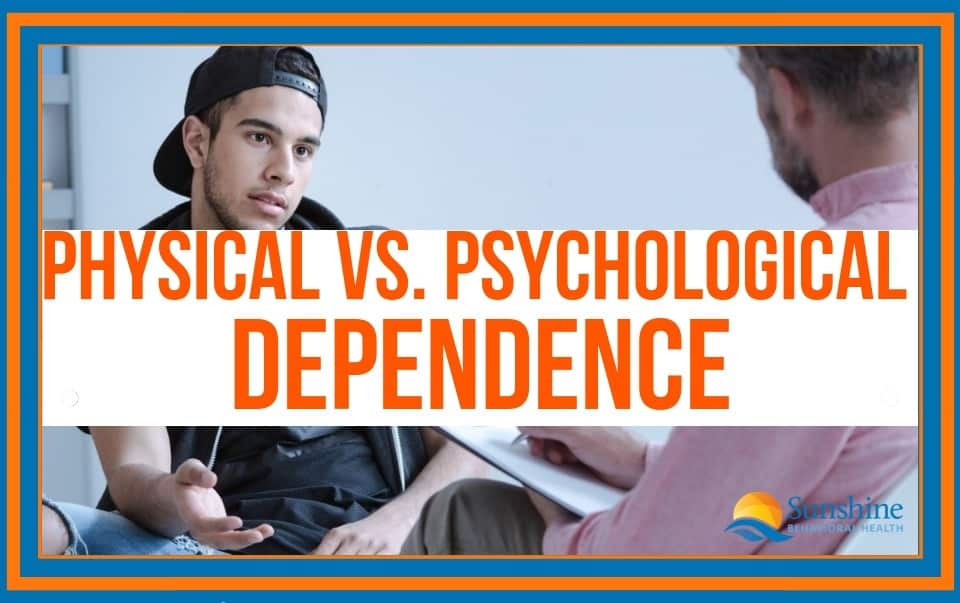 In America and around the world, drug and alcohol abuse is getting attention as a significant public health crisis. In the US alone, recent statistics show that over 21 million people over the age of 12 have a substance use disorder, with 17 million people abusing alcohol, 1 million abusing illicit drugs, and 6 million with a combination of both alcohol and drug addiction.  However many are asking, is their a physical vs. psychological dependence?

Physical dependence is generally thought of as the body’s response to withdrawing from drugs or alcohol. This can be a short-term withdrawal, such as the time between hits or drinks, or the symptoms can manifest in a more intense way as part of a formal detox process.

When you use drugs or alcohol over a long period of time, there are changes in your body that make it so that your body is unable to function without the drug. You might need higher or more frequent doses of a drug or of alcohol to feel the same effects you once did or your body might have difficulty functioning without drugs or alcohol in your system.

Symptoms of physical dependence can include:

What Drugs Can Cause Physical and Psychological Dependence?

Affects of Addiction on the Brain

The brain is significantly impacted by addiction. Research has found that long-term use of drugs or alcohol can cause physical changes in the brain, in addition to changes in the way hormones and neurotransmitters, are used by the body. Changes in the brain can affect your mood, memory, thinking, and behavior, as well as the way your organs function.

Physical vs. psychological addiction can be a vicious cycle that keeps people using drugs or alcohol even if they want to quit. However, the good news is that when both are addressed by qualified addiction specialists, the ability to fully recover from addiction increases.

A strong treatment program will address both the physical and psychological components of addiction. Withdrawal symptoms will be carefully managed, using medications if necessary to ensure safe detoxification. For some drugs, such as benzodiazepines or opioids, the only safe way to detox is with the assistance of doctors or trained professionals to help you slowly ease off of the drugs in a safe manner.

Psychological dependence is addressed through the use of individual counseling, group therapy, 12-step programs, sponsors, and alternative holistic treatments, such as yoga or deep breathing, designed to help control cravings, reduce symptoms of anxiety and depression, and teach you healthy ways to cope with trauma or stress. Building and maintaining a strong social support system can also be useful in combatting symptoms of psychological dependence.

It is important to understand that physical and psychological dependence are intertwined and both play a significant role in maintaining addictive behaviors. If you feel that you or a loved one are struggling with dependence on drugs or alcohol, give us a call today. We are experts at addressing both the physical and psychological parts of addiction and will work with you in your journey towards a clean and sober life.