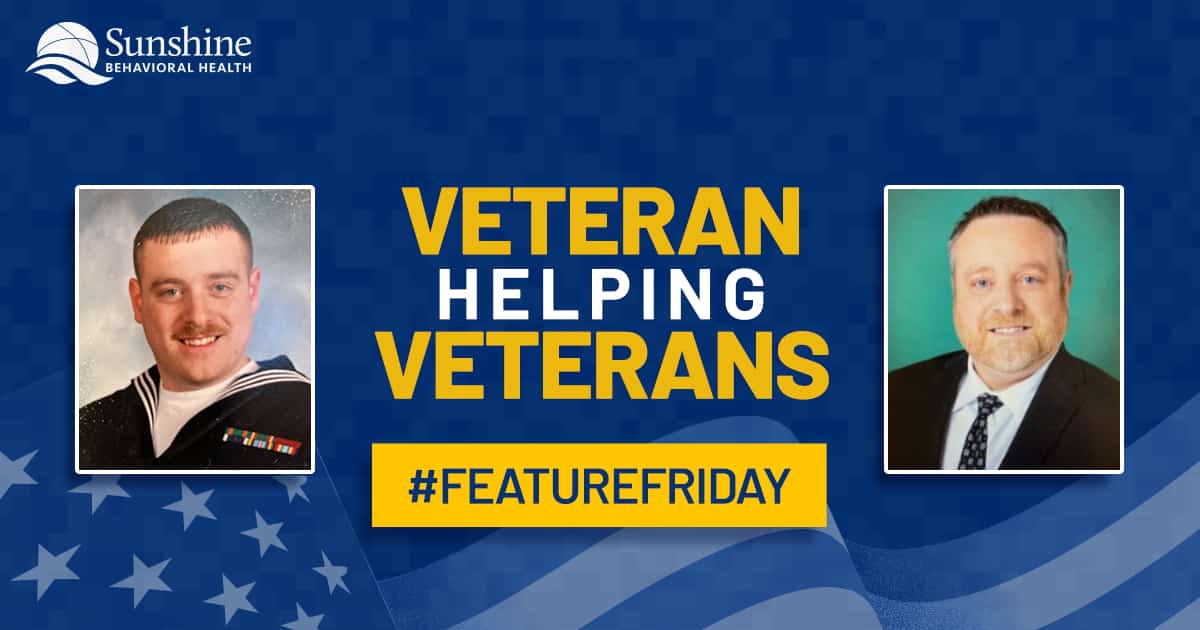 Sunshine Behavioral Health honors those who have served their country and is proud to employ some of those individuals. One of these employees is Lincoln Recovery’s Jeremy Woods.

After serving in the U.S. Navy, he understands firsthand the challenges that veterans can face, so he strives to help his fellow veterans.

He took time out of his day-to-day role as the executive director of our newest treatment facility, Lincoln Recovery, in Raymond, Ill., to answer questions about his experience with Sunshine Behavioral Health and how his military experience will translate to the job.

(Our questions are in blue, Jeremy’s answers are in black.)

What was your driving force to work for Sunshine Behavioral Health? How did your military training prepare you for your role?

My first introduction to Sunshine Behavioral Health (SBH) happened to be a fellow veteran, Manuel Perez. I served in the Navy, and Manuel in the Marines. During my first interview with Manuel, our bond as brothers became immediately apparent. There is a special relationship that exists between all veterans, even if they have never met before.

After talking with Manuel, I knew SBH was the right fit for me. I would be able to put the leadership skills I learned in the Navy to good use. The Navy taught me discipline and motivation. Over the years I have tweaked those attributes to become a highly motivated and energized leader. I have a strong desire to serve and assist my country and community.

In which military branch did you serve? What was your rank?

I served in the U.S. Navy and was a petty officer second class, (E-5) AT2 (AW/SW). In medical school, I served again in the Air National Guard as a lieutenant in the Medical Service Corps.

Where did you serve?

I was stationed at Naval Air Station Norfolk in Norfolk, VA. I did two deployments, both on aircraft carriers. The first was the USS George Washington (CVN-73) and the second was on the USS Theodore Roosevelt (CVN-71). I served in Iraq and Kosovo.

How long did you serve? When did you leave the military? What was that process like?

I served for four years on active duty in the Navy and four years in the Air National Guard. I left the Navy in 2000 and went directly to college.

The process was very difficult at first. Getting accustomed to civilians again was a big change. I was used to the structure and discipline the military offered. The camaraderie among military personnel was incredible.

Do you know people who had alcohol or drug problems while they served or after they left the military?

I think it’s safe to say at least 75% of active military members have a drug or alcohol problem. The long deployments away from home and family, the stress of combat, and the loss of brothers and sisters is often too hard to deal with. Alcohol is an easy way to cope.

Alcohol is also a way of being a part of the clique. I drank more during my four years in the Navy than at any other time in my life. That mentality follows after leaving the military. Alcohol also becomes a band-aid that covers other problems.

Do you have specific advice for service members or veterans who are struggling with alcohol or drugs? Any advice for their loved ones?

Seek out other veterans! Only veterans truly understand other veterans. Contacting a local VFW post or a Veterans Affairs (VA) location is a great place to start.

One of the programs we plan to offer at Lincoln Recovery is a veterans’ support group during the evening hours. The other veterans on staff and I are going to hold group sessions throughout the week for our clients who are veterans, even if the conversations have nothing to do with substance abuse.

Veterans often feel safest [with other vets] and trust other veterans. We want to provide an environment where veterans can discuss their military service, trauma, PTSD, substance abuse, or even just day-to-day issues with others who can understand and relate. In my mind, there is no greater way to honor this great country than to care for its veterans.

Anything else to add?

It was my greatest honor and privilege to serve our country. I am so proud to be a part of a company that cares so much for those that have served! Bravo Zulu SBH!