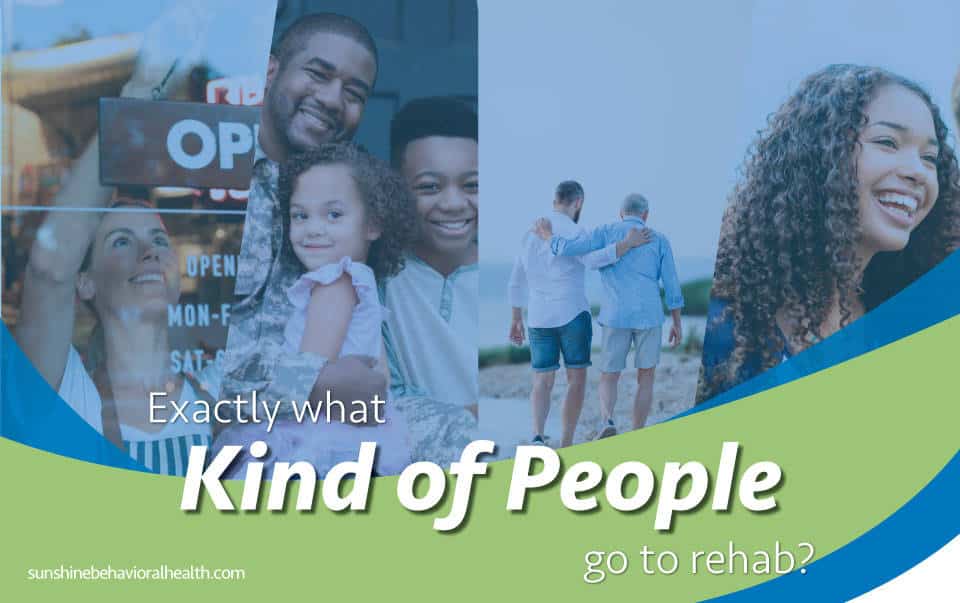 What Kind of People go to Rehab?

What Kind of People go to Rehab?

Drug and alcohol use have long had a complicated history in the United States.

In the golden age of Hollywood alone there are countless stories of actors and actresses being given pills like they were candy: To stay awake through a long day. To steal a few hours of sleep. To drop a few pounds.

Then there was Prohibition throughout the 1920s and early 1930s. History’s shown that banning the problem didn’t exactly make it disappear. Far from it, in fact.

Drug use was popular in the 1960s. The counterculture turned on, tuned in, and dropped out, mostly with LSD and marijuana. It shocked the mainstream — never mind that it was acceptable to have a scotch at the office or for a housewife to rely on “Mother’s Little Helper” (more than likely Miltown) to get through the day.

Speed, cocaine, acid, quaaludes, dope — it all was mostly reviled by the general populace.

In between President Nixon declared war on drugs and Nancy Reagan urged kids to just say no.

More recently cannabis has gradually been destigmatized while we’ve sounded the alarm on the opioid epidemic. Much of it hinges on medical value and the potential for abuse. Then there’s the drug scheduling system and the Controlled Substances Act. (Heroin, for example, is Schedule 1, with a high potential for abuse and no medical value. In contrast, some cough medicines with small amounts of codeine are Schedule 5, with medical value and little likelihood to be misused.)

That tension remains, however, over how drug and alcohol addiction is perceived.

Despite substance use disorder officially being categorized as a mental illness — because it changes a person’s behaviors and priorities, and interferes with their day-to-day lives (work, school relationships) — it’s still seen by many as some kind of moral defect.

That continues despite federal reports estimating that one in every seven Americans will struggle with a substance use disorder. Facing Addiction in America, the Surgeon General’s report on how drugs and alcohol impact the U.S, estimated drug and alcohol abuse and addiction costs the economy $442 billion every year. That’s more than diabetes.Vivek Murthy, former surgeon general, told USA Today that every dollar invested in sound treatment can save $4 in health care costs and $7 in criminal justice costs. Losing the stigma and changing how addiction is viewed and approached (including prevention programs and quality treatment) would put less strain on society, Murthy said..

He’s gone so far as to call for a “cultural shift” on how we regard addiction. By viewing it as some kind of moral failing, that adds shame and makes people with substance use disorders hesitate to seek treatment. A better approach would be to treat it like a chronic illness to be handled with compassion and skill. Like heart disease, diabetes, or cancer, it’s something that can be managed, but it will need long-term approaches.

A Health Issue, Not a Moral Failing

To make that shift happen means no more thinking of addiction as some kind of character defect. Instead, consider it a chronic brain disease that needs compassion, treatment, and maintenance like any other ongoing health condition.

It’s not that a person is “weak” and becomes addicted. A number of things factor in, including:

In addition to the struggle with craving and addiction, people face a number of additional fears that may serve as barriers to getting help:

Media coverage gets some blame as well, and not unreasonably so.

Cases that turn violent or tragic tend to get more play than the story of someone who achieves sobriety. For every Amy Winehouse story that ends tragically there are countless stories of people who stopped on their own, or who walked into an AA or SMART Recovery meeting, or who checked themselves into rehab with little ceremony and little incident, except that they wanted to get better, and they did.

That’s why it can be helpful when people in the public eye are open about their struggles with and successes overcoming addiction.

And lots of celebrities have struggled with addiction:

When you think of a celebrity who lives in a mansion with a pool and personal chef and trainer, who perhaps makes millions a picture, it’s hard to imagine why they would ever have to use.

That’s the thing with addiction and mental illness. Anyone can be affected. Anyone can suffer anxiety or depression or have a traumatic past event. Anyone could have grown up with parents who drank and kept the liquor cabinet unlocked.Or been peer pressured to try something at a party. There are endless types of people who struggle with addiction:

Many people have reasons for use. Abuse. Trauma. Depression. Anxiety. Schizophrenia. Job pressures. Money woes. War wounds.
Pain is universal. Mental illness can affect anyone. But anyone can get help, too.