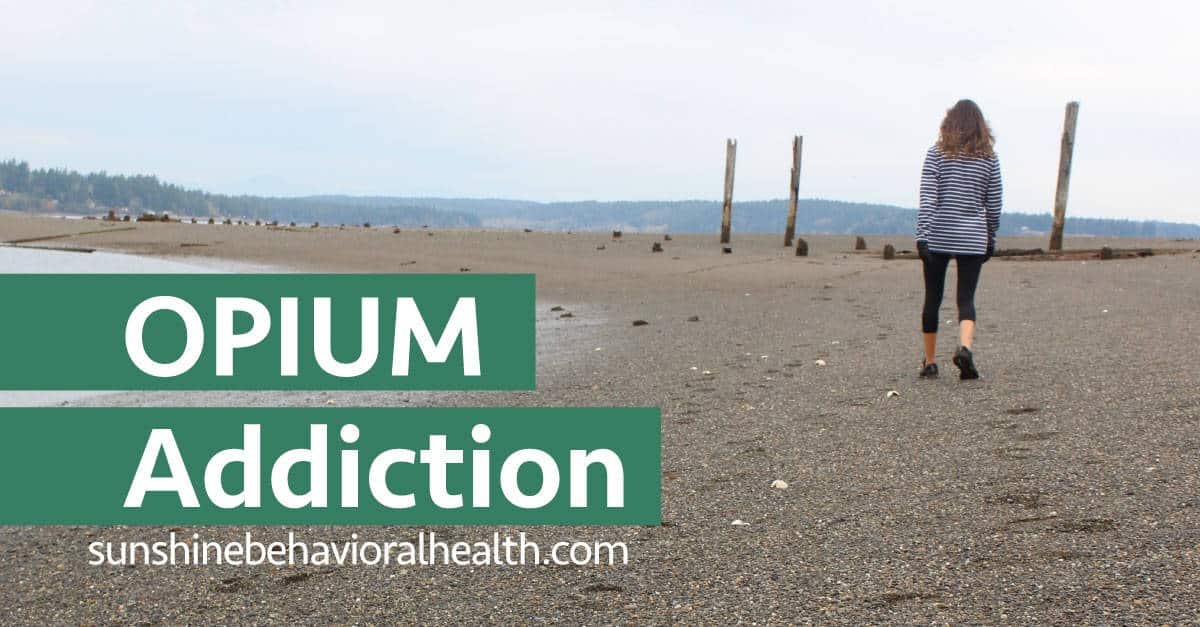 Opium. It’s a simple narcotic native to modern-day Turkey with a history that stretches back thousands of years. Poets and painters have imbibed it. It’s fueled trade. It’s even sparked wars. Interestingly, the battles were waged not over the drug, but for the right to sell it.

All this from a compound derived from the unripe seed pods of a simple flower that blooms pink, red, purple, or white atop a slender stalk. And atop that stem, coaxed from the milky gum of those seed capsules, we get morphine, heroin (the most well-known) and codeine. The plant also contains papaverine, a nonnarcotic alkaloid that is a smooth muscle relaxant and vasodilator (a substance that opens blood vessels).

Drugs such as opium are often known as opioids. Opioids affect certain receptors in the brain, spinal cord, and digestive tract, blocking pain and triggering pleasure receptors. There are natural ones, like morphine or heroin, and synthetic versions, such as fentanyl.

They’re also highly addictive. People who use opioids may experience intense cravings — chasing that euphoric high that opium and its derivatives offer — and breaking the habit is difficult, painful even.

Despite known risks, opioid prescription rates for the United States reached a high of 81.2 prescriptions for every 100 people. There have been slight decreases in the years since, and decreased to 70.6 percent by 2015.

According to the National Institute on Drug Abuse (NIDA), in 2017, more than 47,000 people in the United States died due to opioid overdoses. Approximately 21 to 29 percent of chronic pain sufferers who have been prescribed opioids abuse them, either by taking too many or combining them with other substances, such as alcohol, marijuana, and cocaine. Eight to 12 percent develop a disorder.

Signs of Opium Use?

Opium can be smoked, injected, or taken orally in pill form. The effects are similar to heroin. An opium high usually delivers a feeling of bliss, followed by a period of relaxation and relief from physical pain.

It’s also not unusual for opioids to be combined with other drugs, such as marijuana or methamphetamine (meth). Abusing opioids can lead to a slew of problems, including hypoxia, a condition that limits the amount of oxygen that reaches different parts of the body, including the brain. Short-term, hypoxia can lead to lightheadedness or unconsciousness, but long-term, it can lead to comas, brain damage, and even death.

Short-Term and Long-Term Effects of Opium

Opioids are effective pain relievers and produce feelings of euphoria. That bliss comes at a price, however, because opioids work on the part of the brain stem that controls breathing. That’s hardly the only concern, though.

Opium becomes more dangerous in its altered states — such as morphine, heroin, or opioid prescription drugs. Heroin abuse and addiction are two of the most prevalent opium-related problems in the United States, and, since heroin is a more potent derivative, poses greater potential dangers than opium. In addition to the risk of overdose, which can lead to comas, seizures, or even death, heroin misuse can lead to other health problems, including:

The obsession with chasing that next high can destroy any semblance of a normal life, as the addict ignores responsibilities. Job performance may suffer. School work could be neglected. Family life and social obligations might be ignored.

Dangerous and illegal behaviors may result, too, affecting not only the individual but also society overall. Violence and illegal activities are two troubling outcomes. Shooting up can lead to illnesses such as hepatitis C or HIV.

That preliminary sense of euphoria that one enjoys from opioids tends to be short-lived, and other, far less pleasant issues tend to follow. Taking too many pills produces a high, but to smoke, snort, or inject opioids creates a more intense — and more dangerous — level of intoxication. Breathing slows, and when oxygen intake is insufficient, brain damage, coma, and even death may follow.

When someone has overdosed on opium, they may experience several symptoms, including:

If an overdose is suspected, do not delay. Call 911 immediately. A medical professional may administer the drug naloxone. This substance halts the opioid’s effect on the central nervous system, and breathing should resume. Naloxone can be inhaled or injected. In some U.S. states, pharmacists can dispense naloxone without a prescription.

Heroin, derived from opium, ironically was touted as a way to kick morphine addiction. One could say it cured opium dependency, but with it came the risk of turning someone into a heroin addict. Considering that heroin is four to eight times stronger than morphine, it’s all the more troubling.

While heroin is a fail when it comes to treating opioid addiction, methadone, an opioid commonly used for pain management, can be helpful in alleviating withdrawal symptoms. It works at a slower pace than other painkillers, and it blocks the crave-inducing high, providing relief from the discomfort of drying out.

Opioid withdrawal is intense, and sets in quickly. If people quit using opioids immediately, the phenomenon is sometimes known as going cold turkey. Usually within the first 24 hours after going cold turkey, users will experience a host of unpleasant symptoms, many of which mimic the flu or a bad cold. The symptoms include:

After the first day of withdrawal (sometimes it takes a bit longer), the symptoms may intensify to include:

Such extreme discomfort can make it nearly impossible to make people to want to stop using drugs. There are options, fortunately, to make the weaning process easier to endure.

Methadone, as mentioned above, can alleviate the pain of quitting while muting the euphoria that leads others to pursue that addictive high.

A number of treatments are available to break free of opioid addiction.

Typically the first goal is to detox a person, but that tends to be only the beginning, and that is often not considered treatment, nor is it considered enough to remedy the problem. Rather it’s the initial step toward becoming — and staying — clean.

Two medicines, buprenorphine and methadone, can help by connecting to the same parts of the brain that opioids typically target. These connections can curb cravings and ease painful withdrawal symptoms. Another medicine, naltrexone, also stops opioid receptors and blocks the feel-good effects that opioids can offer.

Devices can be utilized to help ease withdrawal symptoms, and applications can be employed to teach coping skills. An electronic stimulation gadget, the NSS-2 Bridge, can be placed behind the ear. It sends electrical pulses to activate brain nerves and to ease the discomfort of withdrawal. In addition, the U.S. Food and Drug Administration (FDA) approved the drug lofexidine in 2018, and it is a non-opioid that was created to curb withdrawal cravings.

Behavioral therapies are also a treatment option. The focus of such therapies tends to be on managing how one handles triggers and stress. They focus on creating better habits and establishing better coping alternatives.

Determining if people also have mental health issues such as depression or anxiety can also be helpful, especially in cases where people are self-medicating with drugs or alcohol instead of pursuing therapy or taking the appropriate medications.

The National Institute on Drug Abuse reports that a combination of programs and therapies — medication-assisted treatment (MAT) — tailored to the needs of the individual typically offer the most promising results.

Anxiety treatment medications such as Xanax or Valium can also help ease the stress of adjusting to sobriety.

Inpatient or residential treatment programs can be quite effective. According to the National Institute on Drug Abuse, people with co-occurring disorders and/or other more challenging problems can benefit from the added structure and care.

There are a number of treatment settings, including:

Getting better doesn’t occur immediately, nor in a vacuum. A long-term plan is best to ensure that an individual sticks to the program and that he or she doesn’t relapse. According to the NIDA, the most effective courses of treatment include detoxification, counseling, medication, evaluation and treatment, and long-term follow-ups to avert relapse.

Getting help is a huge first step, and some people might fear making that move if they are worried about paying for drug rehabilitation rather than getting well. Health insurance costs and coverage may seem daunting, but there are multiple avenues to traverse on the road to recovery.

Depending on different health plans, costs may vary (considering deductibles, limits, networks, etc.), but there’s also a cost to not finding help. Relationships can be ruined. Careers may be set back. Health might be compromised. Lives may be lost.

Coverage can vary, however, depending on what U.S. state you live in and what plan you have. A good place to research insurance coverage is the Health Insurance Marketplace.

There are also parity protections in place in the Marketplace. Insurers can’t limit mental health and substance abuse services any more than medical or surgical services. Coverage limits protected by parity include:

Privately, like in the Marketplace, coverage hinges on the plans that people have. Some plans may have a wealth of in-network options. For example, if people have preferred provider organizations (PPOs) for coverage, their out-of-pocket costs are likely to be lower.

To clarify matters, the NAMI explains which plans must follow federal parity rules and which ones are exempt. The following must adhere to parity:

The following plans do not need to stick to parity requirements:

Organizations such as the U.S. Substance Abuse and Mental Health Services Administration (SAMHSA) can offer guidance. SAMHSA provides assistance via its national helpline at samhsa.gov. While SAMHSA does not provide counseling, it does have trained specialists who can provide information and connect people with local resources, whether or not someone has insurance or not.