How to Cope with DUI Stress

When a person is pulled over for driving under the influence, they’ll face more issues than a ticket and court costs. Resulting stress can affect both mental and physical health in the short and long term. 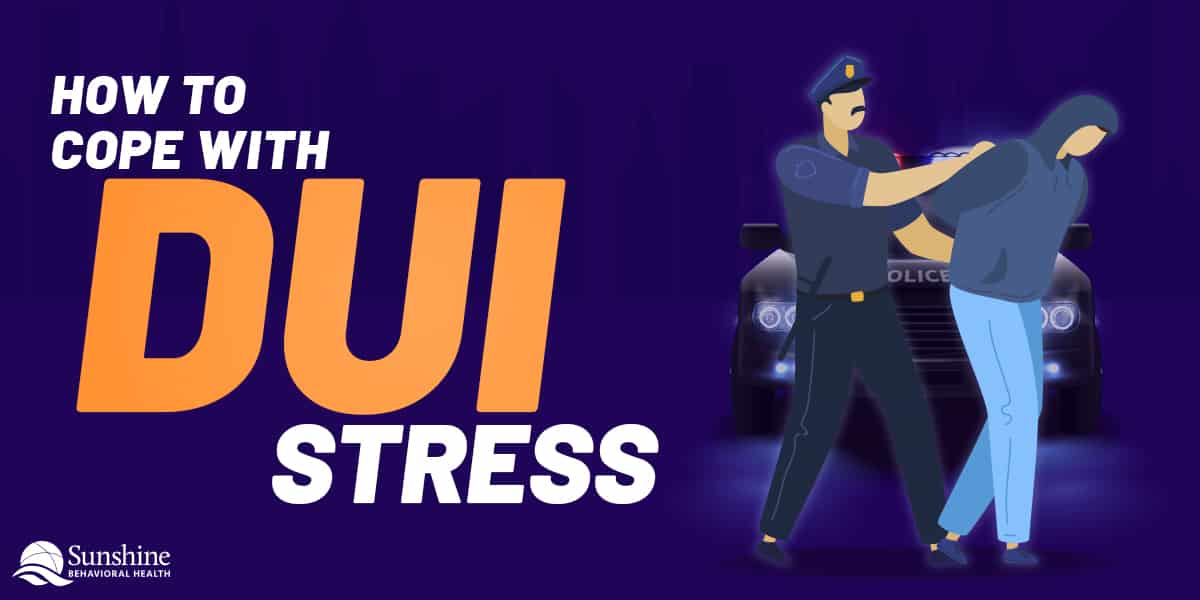 When police stop drivers for driving under the influence of alcohol or drugs, there may be more serious consequences than a ticket. Those potential legal problems may lead to health-threatening and life-threatening stress.

What Is DUI (Driving Under the Influence)?

Being stopped by the police is stressful in general. If there is any suspicion that the drivers have been drinking or using other intoxicants, illicit or legal, they may face additional stress in the form of:

Usually, the substance involved is alcohol because there is a per se legal standard for alcohol intoxication—a blood alcohol content or blood alcohol concentration (BAC) of 0.08% or higher— and methods for measuring it by testing breath, blood, or urine.

This standard applies whether or not the individuals behave as if intoxicated. A positive BAC test, even if below 0.08%, can be grounds for a DUI. Some people have a lower tolerance.

Defense attorneys argue that breathalyzer and urine tests are less reliable than blood and that urine and blood tests are time-sensitive; a delayed analysis can skew the results. So can poor calibration of the device.

Even if accurate, safe BAC levels indicate how alcohol affects the overall population. Some people have a higher tolerance. Police won’t hesitate to arrest someone with a lower BAC if there is sufficient evidence they are intoxicated, but the courtesy does not extend the other way.

DUI of drugs is also illegal but is more difficult to establish. No existing roadside breath or saliva test reliably measures marijuana intoxication.

Even if there were, there is no agreed-upon level of marijuana that indicates intoxication. Blood and urine tests only establish the presence of cannabis, not whether or not it is currently causing intoxication. In 15 states, however, operating a vehicle with any detectable amount of certain drugs is a crime.

Driving while impaired due to other legal drugs, such as opioids, stimulants, and benzodiazepines, is also illegal but even harder to prove.

Law enforcement’s best bet for non-alcohol-related impairment are field sobriety tests administered by specially trained drug recognition experts (DREs) who use a 12-step protocol. There are cases where subsequent blood tests come back negative, raising questions about the reliability of DRE testimony. 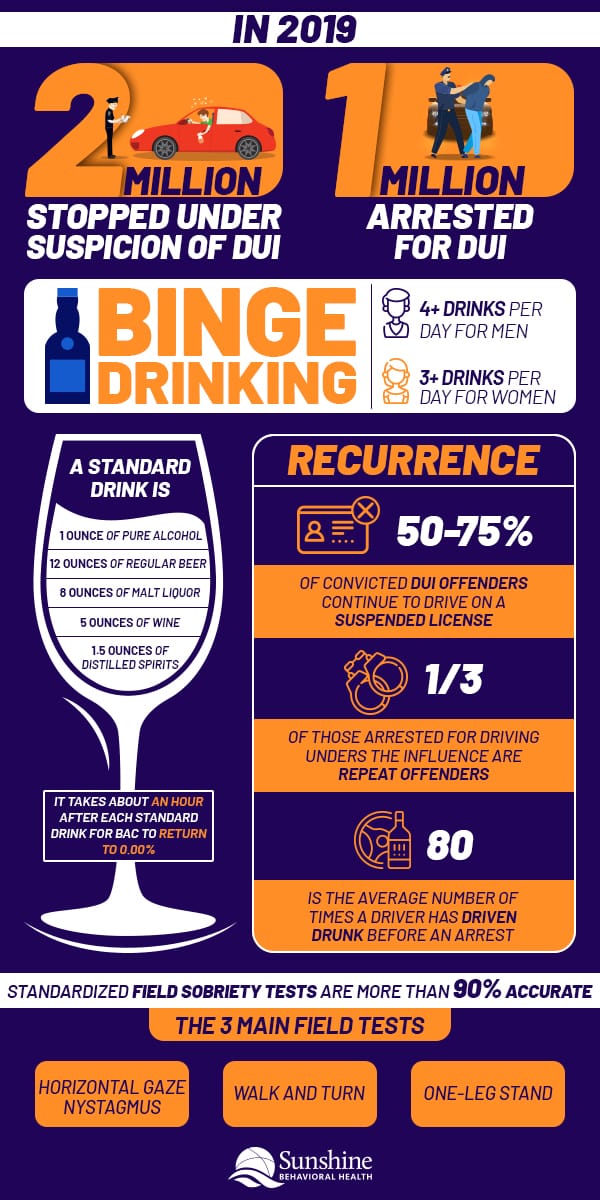 How Many DUI Arrests?

In 2014, 111 million drivers—almost half of the nation’s 229 million drivers—self-reported driving while alcohol-impaired. Because these were self-reports and the stigma attached to drunk driving, the actual numbers may be higher.

Not that police catch all of them. In 2019, U.S. police arrested more than 1 million drivers for DUI, but that’s less than 1%.

Not that DUIs account for all stops. Police stop more than twice as many drivers—up to 20% of all drivers in some states—for various traffic violations. State police make more than four out of five (83%) total stops.

Standardized field sobriety tests (SFSTs) are psychophysical tests of balance, attention, and coordination. Together, they are rated more than 90% accurate for determining intoxication by the National Highway and Traffic Safety Administration (NHTSA).

Refusal to attempt the tests is not illegal but may not prevent arrest. Successfully passing the tests may result in nothing more than a ticket.

After the field sobriety tests, police officers may attempt to administer at least one of these chemical tests:

In many states, refusal to take either test violates implied consent laws and may result in a mandatory penalty up to and including a fine, jail time, and loss of driving privileges even without a DUI conviction.

There are no accurate tests for measuring or even determining intoxicating levels of marijuana, nor how long after use one remains intoxicated. As marijuana becomes increasingly legalized and decriminalized, this becomes a problem for law enforcement.

A comprehensive yearlong NHTSA study found no significant increase in accidents or fatalities associated with marijuana use alone. There was for marijuana and alcohol together, but it was identical to alcohol.

Some computer apps use reaction time to determine impairment from any cause—alcohol, marijuana, other legal or illegal drugs, concussion or other injuries, or simple fatigue—but law enforcement has been slow to adopt them. Mainly, people use them for self-evaluation. 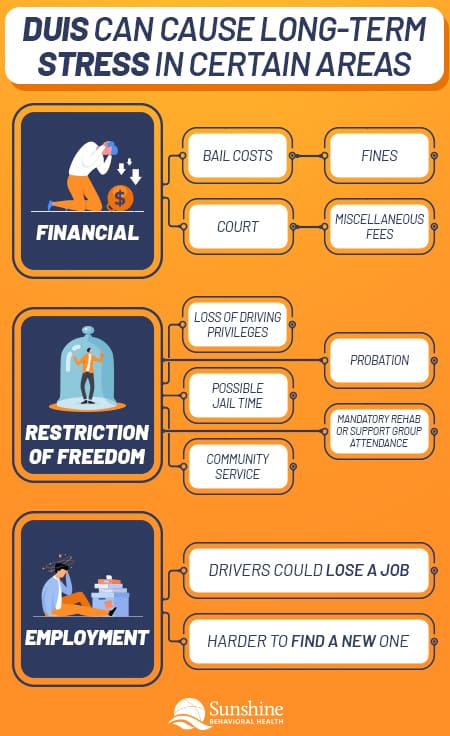 Most DUI sentences assume that the driver has an alcohol dependency and so include either substance abuse rehab or at least attendance in a 12-step program such as Alcoholics Anonymous (AA).

This may not help because the drivers may not think they are alcoholics. They might even be right. Although many U.S. judges and prosecutors seem to believe that only alcoholics or drug addicts would DUI, studies do not confirm this.

According to the Centers for Disease Control and Prevention (CDC), most people investigated for DUI had been binge drinking, but most (90% in one study) binge drinkers are not alcoholics or have severe alcohol use disorders (AUDs).

AUD is not a behavior; it’s a chronic disease. Substance use disorders, alcohol or drugs, hijack the reward system. If people with AUD stop drinking, they experience withdrawal symptoms.

People with AUD are more likely to drink and drive, but they don’t make up a commensurate number of those arrested for drinking and driving.

DUI is a decision, based upon faulty, alcohol-impaired judgment, such as when people:

Whether stress is due to DUI or the DUI caused the stress, it may not end once the case is resolved. It depends in part on how it is resolved.

A conviction for DUI can cause long-term stress:

Even exoneration might not end DUI stress if not everyone believes the driver is innocent. The stigma lingers.

Like substance abuse and driving under the influence, stress kills. It’s better to seek help for stress before a DUI charge becomes an issue, but it may be even more important after.

How a DUI Arrest Causes Stress

There are many stressful elements of a DUI arrest, starting with the stress of being pulled over by the police in the first place. Then there’s the police interaction, which may include being asked to step out of one’s vehicle and take a field sobriety test and a chemical test.

Refusing to take either test doesn’t necessarily prevent an arrest if the police officer has reasonable suspicion (based on the smell of alcohol, slurred speech, erratic driving behavior).

Such refusals may also violate a state’s implied consent law requiring consent to such tests as a condition of the driver’s license. Failing a chemical DUI test will probably result in an arrest.

Then there is the stress of:

That’s all before going to court, which can take stressful weeks or months. If convicted, drivers face many possible penalties, ranging from a fine to imprisonment, driving restrictions to mandatory alcohol or drug rehab.

The penalties are generally less severe for first-time offenses but can increase when the BAC is high (0.15%) or when drivers refuse to consent to a DUI test.

The Effects of Stress

Prolonged or chronic stress can affect the mind and body in many ways, including:

Preventing the Stress of DUI Arrest

One major cause of stress is the feeling that the individual has no control over the stressor. With drunk or drugged driving, the individual does have control before the fact.

A DUI arrest might have been prevented if drivers:

Managing the Stress of DUI Arrest 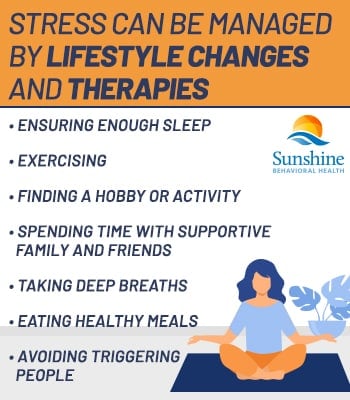 After a DUI arrest, stress can’t be prevented so it must be managed. That requires some practical steps to deal with the consequences of the arrest, as well as healing the residual or ongoing stress.

Drivers charged with DUI should:

In general, stress is managed by lifestyle changes and therapies.

Therapies for stress relief include:

Any of these techniques, alone or in combination, may help with general stress.