Anyone from any walk of life can be a victim of domestic violence. Learn the signs and ways to seek or offer help. 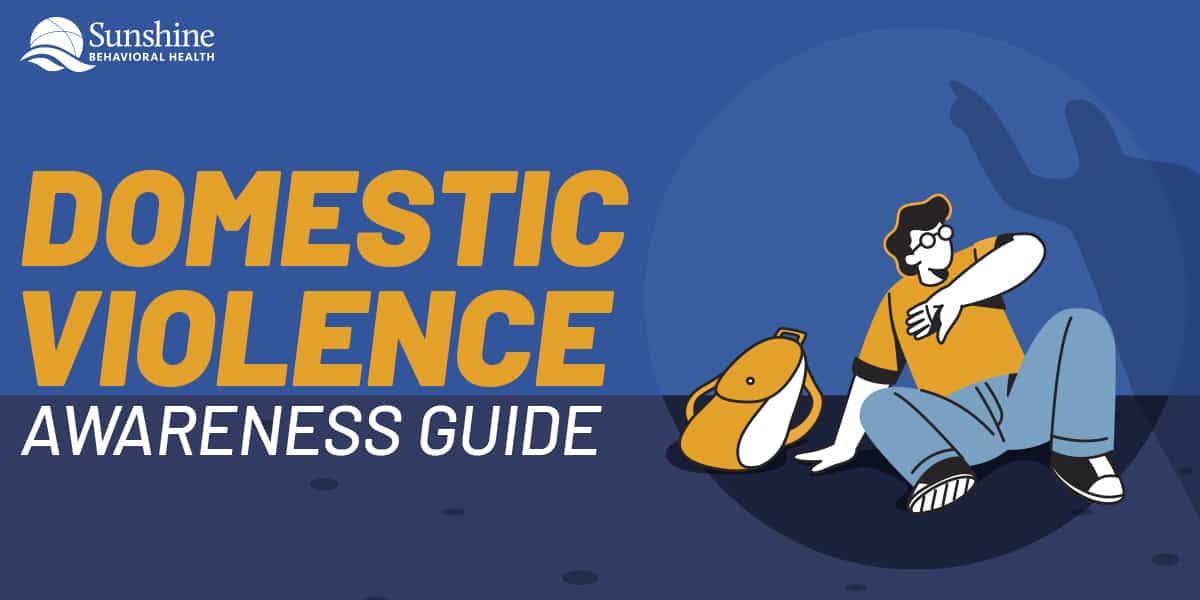 What Is Domestic Violence?

Domestic violence occurs when one intimate partner abuses the other. It’s not limited to physical abuse. It can be sexual, emotional, psychological, and even economic in nature. It’s characterized by fear, intimidation, humiliation, and injuries. Anyone of any gender, race, age, culture, religion, educational level, or socioeconomic group can be a victim.

Essentially domestic abuse occurs in relationships where one partner resorts to behaviors designed to overpower and control the other.

Men are victims of domestic violence, too, but it affects women more often.

According to the National Coalition Against Domestic Violence (NCADV):

Also referred to as domestic abuse or intimate partner abuse, domestic violence doesn’t only hurt the victim. Children in such situations suffer. So do other loved ones.

It can also affect the victim at work, leading to sick days, reduced productivity, and even job loss. Domestic violence costs the U.S. economy an estimated $8.3 billion each year.

Domestic violence can take on many forms, from slapping to insults to forcing a person to do things against their will. Types of abuse include:

Sometimes abuse begins in small or subtle ways. It could be something that makes the injured party wonder if something is going on, but they may downplay it or dismiss the behavior as an anomaly. An abuser may apologize, explain it was an accident, or say they acted out of love.

That “one time” rarely is, however. Often the abuse escalates.

Domestic abuse red flags include a partner who:

Other red flags include:

If a person suspects a friend, co-worker, or loved one is a victim of abuse, here are some signs to look out for: 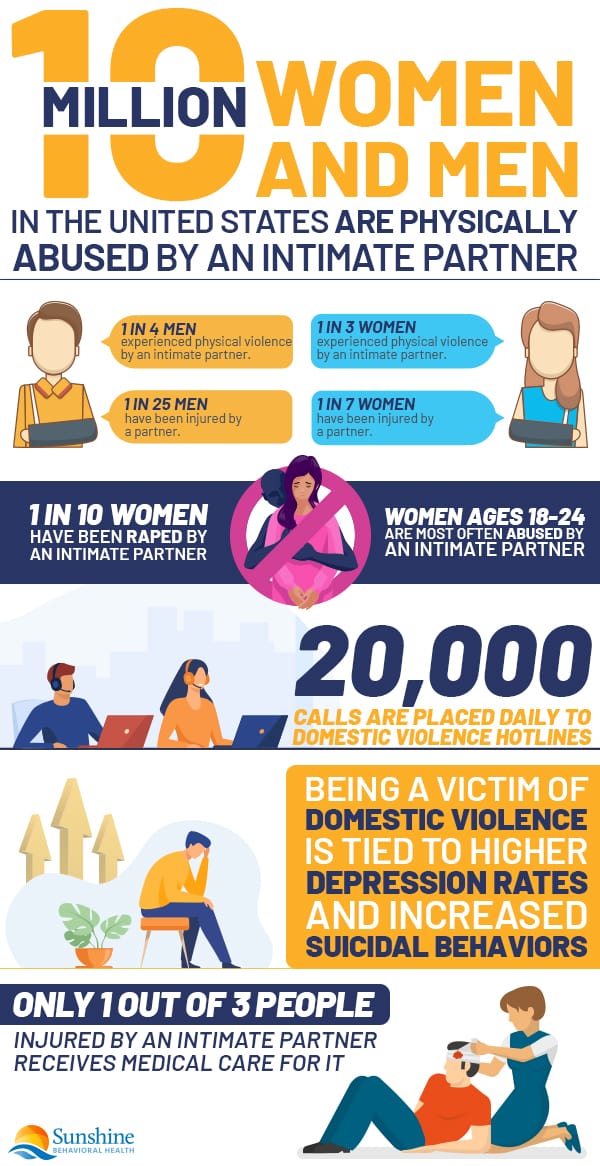 The Cycle of Violence

Money troubles or drug and alcohol problems can raise the likelihood of abuse.

Domestic violence rarely is a one-time occurrence; it tends to escalate.

Early stages often are marked by tension. The victim may be called names or pushed around. The abuser might punch a wall. The victim rationalizes the behavior and tries to show patience.

The abuse usually grows more hostile, and more intense. The victim grows more anxious, but also sometimes more detached as the abuser gets more controlling. There can be phases of a misleading calm in between bouts of aggression. The abuser might act kind or charming for a while.

Despite that period of calm, the situation usually grows more dangerous. The abuser may also use the children as bargaining chips to keep the victim around.

Over time the victim begins to believe that the abuse is normal, or that they may even deserve it.

Some may think once the victim packs up and moves on that the abuse is over. That’s not always the case.

When the victim tries to escape, ends the relationship, or seeks help it’s not unusual for the abuse to intensify. That’s because the abuser is losing control over their victim so they may stalk, threaten, or harass to hold onto power.

Leaving is a dangerous time. One in five homicide victims with restraining orders was murdered within two days of getting the order. One in three are killed within the first month.

Sometimes people believe the victims choose to stay, but often they have trouble escaping. The abuser often does not stop. Law enforcement and the courts may see it as a domestic issue rather than a crime, making it harder for the victim to leave.

Who Are the Victims?

More women than men are victims of intimate partner violence. About half of the murders of women in the U.S. are due to domestic abuse. For the majority of the deaths, there was a history of brutality.

There’s no one kind of victim, however. It affects all ages. No culture, race, religion, educational level, sexual orientation, or socioeconomic status is immune.

There are some issues, apart from the signs of abuse, that show a person may have the potential to mistreat others. They include:

In general, it’s hard to end a relationship even when abuse isn’t a factor. It does complicate things, however.

Many victims do try to leave, but even if they do that doesn’t guarantee they’re safe. There are a number of barriers to exiting a violent relationship.

A lack of support and resources is a huge roadblock.

Sometimes clergy encourage sticking together. Law enforcement may view such situations as domestic squabbles instead of a crime. Prosecutors might not want to file charges either, and restraining orders don’t always work.

According to the National Network to End Domestic Violence (NNEDV), in 2020 there were 1,921 known domestic violence programs. These shelters faced unique challenges in 2020 alone, due to COVID-19.

On one day, 1,665 of those programs took part in a national count. That day there were 11,047 victim-made requests for services that were not met because not enough resources were available. Those included emergency shelter, housing, transportation, legal help, and childcare. More than half of those unmet requests were for housing and emergency shelter.

Domestic violence was considered bad before the pandemic, but incidents escalated in 2020; linked shooting deaths went up 4% nationwide from the year prior.

Violence leads to more than bruises or broken bones. Victims can develop other problems like depression, headaches, anxiety, or post-traumatic stress disorder (PTSD).

Substance abuse can factor heavily into domestic violence, in about half of such incidents. Sometimes it’s a precursor or a facilitator. Some victims say partners force them into alcohol or drug use. 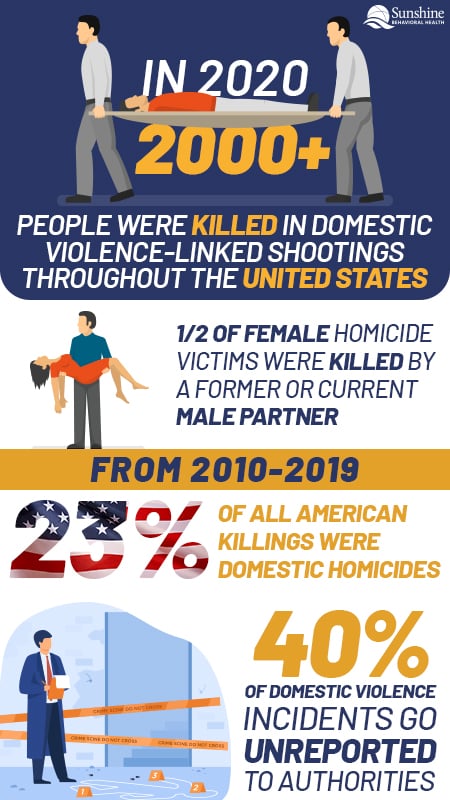 Victims are at higher risk of serious mental health problems and are more likely to drink heavily or use cannabis and tobacco as a result. Often it’s a way of self-medicating. That in turn can lead to risky behaviors, and raise the likelihood of physical health problems like heart disease, a weakened immune system, and many cancers. Drugs and alcohol can make mental health problems worse, too, and vice-versa (co-occurring, or dual diagnosis, disorders).

Substance use can fuel risky behaviors and lead to unplanned pregnancies. If it’s happening during pregnancy that can put the mother and developing fetus at risk of miscarriage, stillbirth, or birth defects.

What Can We Say and Do?

If domestic violence is suspected, it can bring up a lot of questions, including how to help. The best way to do that is to show compassion and kindness.

No matter what the victim decides, respect their decision. If they refuse help, they simply may not be ready. In the meantime, it’s not a bad idea to call a domestic violence helpline to learn more about what help is available. Staff and volunteers can answer questions and offer advice.

If the victim is willing, work on a safety plan with them.

There are a few don’ts for dealing with victims, too:

With domestic violence shootings rising from 2019 to 2020, some states saw huge spikes in fatalities while others saw them drop. It’s not exactly clear why, since some states have more lax gun laws (Texas) and others are quite strict (Maryland.) Both Texas and Maryland, however, saw increases in domestic violence gun deaths.

Some believe the pandemic lockdowns kept the abuser and abused in closer proximity. Unemployment spikes and financial woes added tensions.

According to the National Resource Center on Domestic Violence and Firearms, the presence of a gun in the home increases the risk of domestic homicide, and gun sales did go up during the pandemic. That doesn’t explain everything, but those could be factors.

The most dangerous time for a victim is when they’re leaving the relationship. It’s best to have as much support as possible in those early hours, days, and weeks.

When planning to leave, it’s a good idea to be prepared. Shelters and hotlines can provide advice, answer legal questions, and help track down temporary housing.

Some things to consider:

It’s also a good idea to have a safety plan in place, which can include emergency numbers, safe places, and alternate routes. (The National Domestic Violence Hotline’s website has advice on developing one.)

If you have a personal protection order, give copies to the school, anyone at your job (especially for security and the front desk), the babysitter, or daycare, etc.

If the batterer turns violent or threatening, there are things to do to minimize risk.

Breaking free of a domestic violence situation is rarely easy, but there is help. Knowing your rights, having a plan, and building a support network can be extremely useful. Life-saving, even.

If you are in danger, call 911 immediately. Otherwise, here are some resources for support, help, and more.