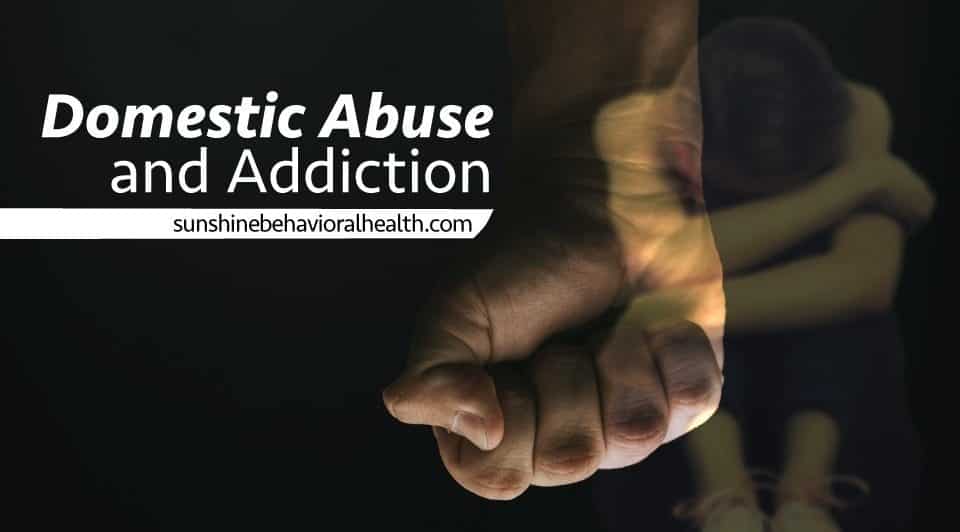 What Is Domestic Violence?

It’s been estimated more than 10 million Americans experience domestic or intimate partner violence every year. For comparison, in 2019 the population of the state of Georgia was estimated to be 10.6 million, so that’s like imagining every resident was a victim of abuse.

The National Coalition Against Domestic Violence estimates one in four women and one in nine men have experienced some form of intimate partner violence. It can take the form of intimidation, physical violence, or sexual assault.

One promising approach toward curbing domestic violence deaths poses the question: what if you could predict which victims were in the most danger?

That’s what’s at the heart of Domestic Violence High Risk Teams. These task forces operate on the local level, where area shelters work with law enforcement and the courts to identify and protect those who are most at risk by helping various components communicate with one another.

Kelly Dunne and Suzanne Dubus, chief of operations and chief executive officer, respectively, of the Jeanne Geiger Crisis Center in Massachusetts formed the first DVHRT in 2005. Dunne was inspired by a conference she attended in 2003.

Jacquelyn Campbell, a professor at Johns Hopkins University School of Nursing and a leading expert on domestic homicide, was the speaker that day. For her doctorate, Campbell interviewed 2,000 domestic violence survivors and combed through homicide files, searching for patterns.

Domestic abuse can be subdivided into many forms, including:

The true extent of domestic and intimate partner violence is hard to gauge. A lot of it is never reported. It’s a problem that can affect both men and women — that includes LGBTQ individuals and transgender individuals as well. 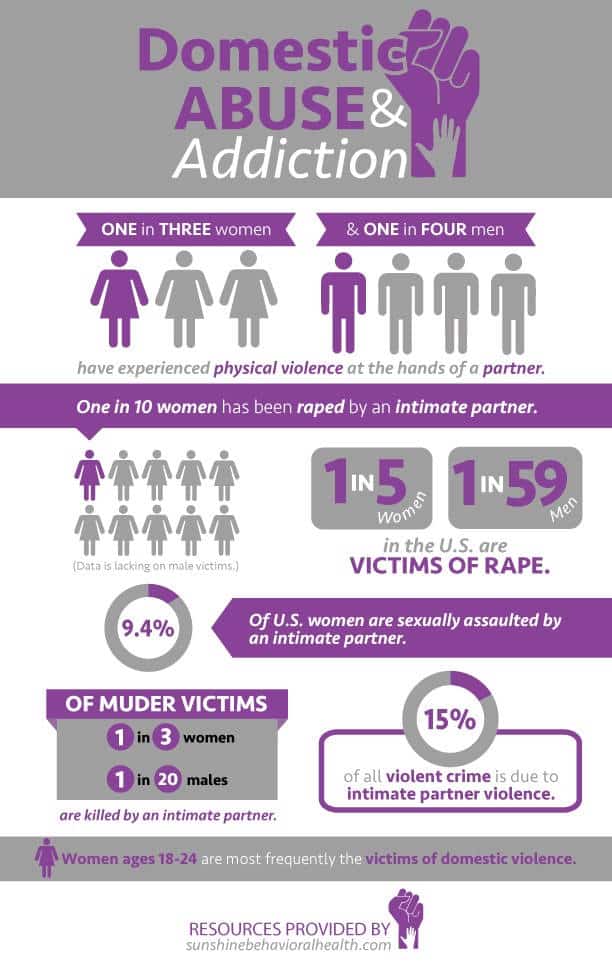 Some symptoms may be obvious, like unexplained injuries and bruises, but abuse manifests in many ways. Women tend to be the majority of victims — an estimated 85% — of intimate violence.

Signs of being abused include:

In cases of same-sex relationships, many of the same warning signs may occur, but with a few additional red flags:

Effects of Addiction and Domestic Violence

Domestic violence and unhealthy relationships exact a toll on individuals, families, and society as a whole.

Victims of sexual assault are at a higher risk of contracting sexually transmitted diseases due to forced intercourse (and the option of protecting themselves being stripped away). Domestic violence also makes its sufferers more prone to depression and suicidal tendencies.

Female victims of intimate partner violence may drink or use more drugs — sometimes being coerced into it by their partners, or sometimes resorting to it as a way to dull the ache of emotional or physical battery.

In some cases, more than half of women who experience such abuse have been diagnosed with psychiatric problems. It can manifest in substance use, eating disorders, and reproductive health problems.

Studies have found some women who had experienced violence were more likely to abuse multiple substances prior to and during pregnancy, which can put newborns at risk of fetal alcohol syndrome and other health concerns.

Families and children also suffer. One in 15 children in 2010, or more than 5 million children, were exposed to intimate partner violence. A third of those children were victims of abuse themselves.

One in three adolescent girls in the U.S. has experienced some form of abuse — physical, verbal, or emotional — in dating relationships.

Children who see or experience domestic violence typically have greater anxiety, sleeplessness, nightmares, separation anxiety, anger issues, and problems concentrating. Abusers may use children as pawns in relationships to better control their victims by threatening to take the children away or even kill them.

That number could be higher, due to under reporting of abuse. Some women fear speaking up; other groups, like shelters, may withhold data in order to protect the women they help.

Care International says the costs of domestic abuse are both direct and indirect:

Indirectly, victims lose income and productivity due to injuries. The perpetrators may not be productive members of society due to substance abuse (sleeping it off, etc.) or may be imprisoned for acts of violence.

It’s hard to pinpoint one true cause of domestic violence, but there are circumstances that may increase the likelihood.

Children who are exposed to intimate partner abuse while they are growing up are three times more likely to engage in the same behaviors than their peers. In such a setting, they may learn to view violence as normal. That means they’re more likely to become victims of abuse or perpetrators of it.

Young witnesses of household violence also may develop any number of adult health problems. The problems include a greater likelihood of  depression, obesity, cancer, heart disease, substance abuse, tobacco use, and unplanned pregnancies. 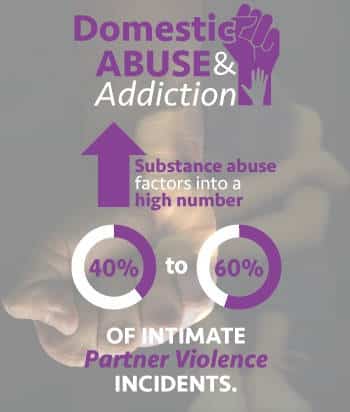 Substance abuse factors into a high number — 40-60% — of intimate partner violence incidents. Alcohol and drugs seem to lessen the abuser’s self-control, making him or her more prone toward aggression. Also, spousal abuse seems to be a strong predictor of substance use or addiction. The abused individual may be forced into using drugs or alcohol, or they may resort to use to cope with their emotions.

Physical violence was found to be 11 times more likely when drugs or alcohol were abused. There are doubts as to whether drug and alcohol use causes the abuse, or whether the substances are used as an excuse for the violence. The U.S. surgeon general report Facing Addiction in America notes that “substance use is both a risk factor for and a consequence of intimate partner violence.”

The type of substance abused can play a factor as well:

Just about any illicit or improperly used substance can trigger aggressive or violent behaviors. It depends on the individual, the dose, and if there is a dependency. (Withdrawal can be painful and set some people off.)

Treatment for Addiction and Domestic Violence

There is no easy fix for addiction or domestic violence. Each case is unique.

Improved or more widespread awareness of and treatment options for substance use disorders may slow addiction and relapse rates. It also may help reduce violent behaviors. Making a concerted effort to protect victims — including children — from domestic violence will build a better, more secure foundation for the current and upcoming generations.

Supporting programs, policies, and legislation designed to put an end to violence against women (really, all victims of domestic abuse, regardless of age or gender) — by educating, preventing, and intervening — are steps in the right direction.

Females are still the poster children for domestic violence, but men are victims of abuse too. An estimated one in seven adult males has experienced severe physical violence at the hands of an intimate partner. One in 10 men has been raped, assaulted, or stalked.

Men may be reluctant to report or seek help for abuse for a number of reasons, including fear of not being taken seriously and lingering stereotypes and beliefs that males cannot be victims of such things. Many also won’t seek help because they believe none is available to them.

There are a number of resources, however, for male survivors of domestic abuse. Many highly visible advocates for stopping intimate partner abuse do also address that males are also victims of violence. Below is a partial list for anyone seeking help or answers:

Some groups are working to make the world a kinder place for everyone overall, in an effort to lift everyone out of the cycles of violence, racism, and more:

National Organization for Men Against Sexism. This activist group advocates positive changes for men. They are pro-feminist, anti-racist, and gay-affirmative. It focuses on male violence and work to shift attitudes, believing that long-prevailing beliefs about male superiority and dominance have inflicted countless wounds on society as a whole.