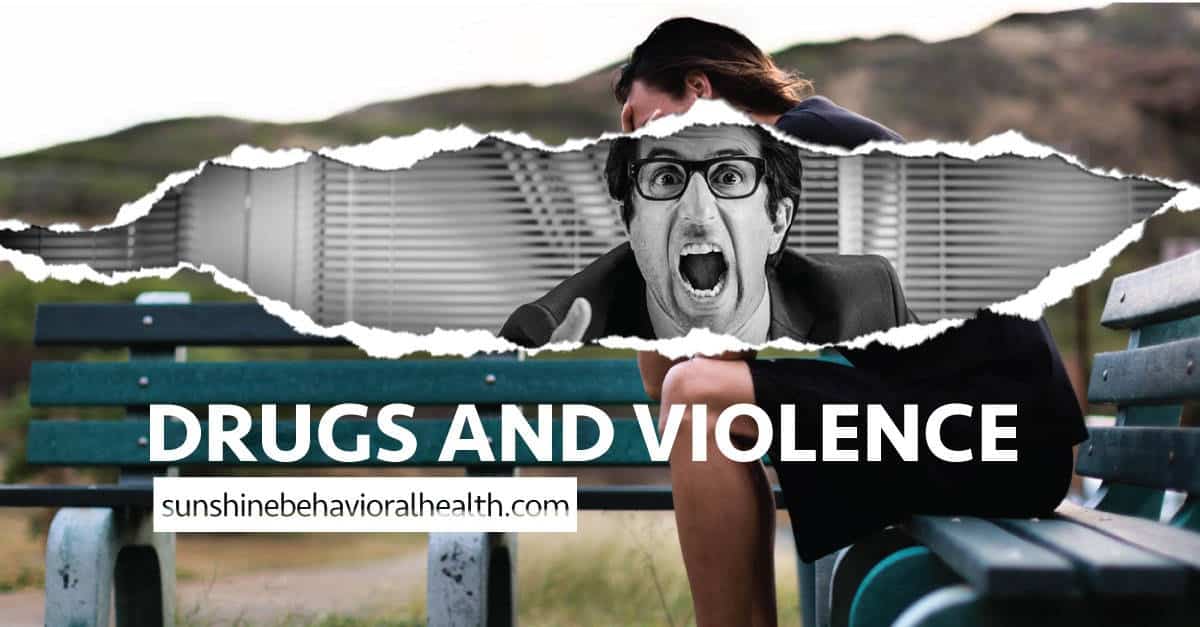 The underlying relationship between drugs, alcohol, crime, and violence are all interconnected and cross many thresholds with one another. Let’s take a deeper look. Substance abuse and violence are often familiar bedfellows. Find evidence of one and the odds are that the other is lurking nearby. The relationship is complex, though. There’s no one-size-fits-all answer.

Violent offenders can be under the influence of drugs or alcohol, or crimes may be committed in connection with illicit trade. Victims of brutality can also suffer at the hands of someone under the influence, or resort to substance use as a means of coping with abuse.It can be a punch or a push. It can be rape or neglect. Every story is unique, but there are some connected risk factors.

First, let’s consider: Drug and alcohol addiction — also called substance use disorder — is a mental illness, or a chronic brain disease. It causes a person to take the substance repeatedly, even though it is doing more harm than good.

Alcohol and drugs can alter the brain in such a way that it makes cutting use extremely difficult. In time, behavior and judgment can become rewired. That might sound grim, but addiction is not exactly an exclusive club. In 2014, 20.2 million U.S. adults had a substance use disorder, and 7.9 million had both a substance use disorder and another mental illness, a condition sometimes known as a dual diagnosis or a co-occurring disorder. The National Alliance on Mental Illness says every year, one in five U.S. adults experience mental illness.

Many people believe mental illness and violence are linked. More than half of Americans believe schizophrenics are prone to attack others, nearly a third think people who suffer from major depression might be dangerous.

There are many types of mental disorders, too, including:

Some of the above also factor into addiction, especially untreated mental disorders, home troubles, bad peer influences, or using at a young age. Younger people are also more prone to mental illness. The National Alliance on Mental Illness says that half of all lifetime mental disorders begin by age 14, and 75% by age 24.A thorough screening that includes medical history, a physical exam, and a psychological evaluation is the best way to receive an accurate diagnosis.

Drug-related violence (including alcohol) is a real concern. A MacArthur Violence Risk Assessment Study found in one case that 31% of people with a co-occurring disorder committed at least one violent act in the previous year. That’s compared to 18% of people who had just a psychiatric disorder. In another case for the same study, however, no significant differences were found. Sometimes, violence may be linked to neighborhoods, early exposure to violence, or some other contributing factor.

If a person could wave a magic wand to make substance abuse vanish, crime statistics would drop dramatically. There is definitely a relationship between drugs and crime. Consider that more than 61,000 people have been “forcibly disappeared” in Mexico since 1964, with the majority vanishing since 2006, all due to its ongoing drug war. In 2019, more than 9,000 were estimated to have gone missing, with hundreds of secret graves discovered and more than 1,100 bodies unearthed.

Between 2007 and 2014, the Mexican government revealed that more than 164,000 people were victims of homicide, their deaths connected to the ongoing war on drug cartels. The World Health Organization prepared a report on illicit drugs and interpersonal violence. Findings include:

Substance abuse can affect perpetrators, sometimes leading them to commit acts of violence. It can impair judgment and remove inhibitions. In cases of people with psychiatric problems, using alcohol and drugs can amplify paranoia or anger. Violence can also affect victims. First, they bear the injuries of both physical and emotional abuse. Secondly, there’s a chance they may resort to drug use as a way to cope.

Several drugs have been found to increase violent behaviors, including cocaine, crack cocaine, amphetamines, steroids, and benzodiazepines (benzos). Alcohol may be the best documented drug in terms of its link to violent behaviors. In 2004. the Global Burden of Disease project estimated that alcohol-connected violence was responsible for 248,000 deaths every year. The connection has been noted as far back as the fourth century BC.

The U.S. Department of Justice found that 21% of prisoners have been jailed for crimes linked to getting drugs or money for drugs.

There is a sad correlation between substance abuse and domestic violence. Statistics are grim. It’s estimated that one in five couples has experienced at least one incident of domestic violence. It can be physical, sexual, or psychological abuse.

Domestic violence is the “willful intimidation, physical assault, battery, sexual assault, and/or other abusive behavior as part of a systematic pattern of power and control perpetrated by one intimate partner against another,” states the National Coalition Against Domestic Violence. “It includes physical violence, sexual violence, threats, and emotional/psychological abuse.”

Signs of domestic violence include a partner who:

There are several risk factors that may contribute to the likelihood of domestic abuse, including heavy drug and alcohol use. Some of the same factors that relate to the potential for substance abuse or addiction also show up in many domestic violence cases, such as:

Treating mental illness and substance abuse may be a way to slash violence rates, but if a partner abuses his or her mate and blames it on drugs or alcohol, it is not an acceptable excuse. Many treatment options exist for drug and alcohol addiction recovery. If you are in immediate danger for domestic abuse, call 911 immediately. Visit the National Domestic Violence Hotline for additional help and resources.