How Is Obesity Related to Addiction? 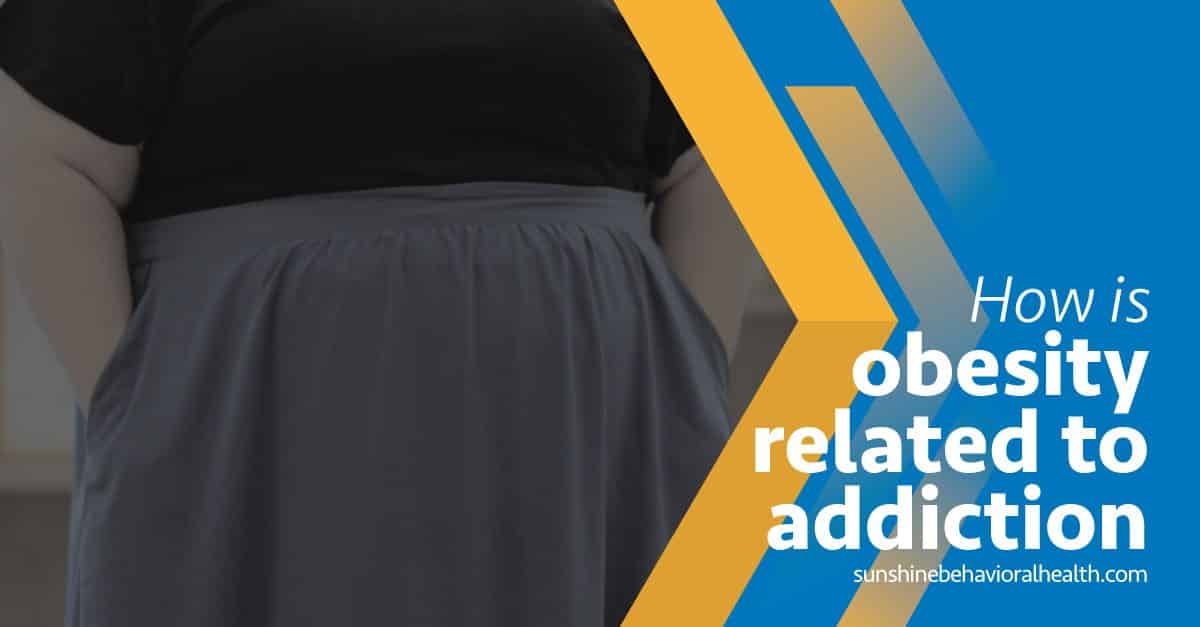 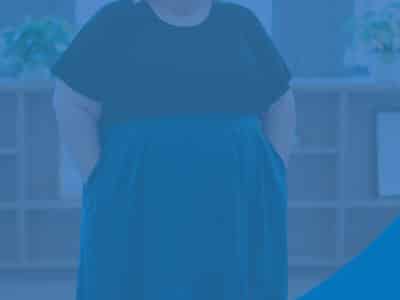 A height-to-weight index known as body mass index (BMI) can help determine if someone’s overweight or obese. According to the World Health Organization, adults are

Although the same BMI may appear different for different people, many use BMI as a health indicator. And many people aren’t that healthy.

Statistics for 2015-2016 from the Centers for Disease Control and Prevention (CDC) indicated that in the United States, the percentage of adults 20 years old and over

The numbers of U.S. residents who have or have had problems with drugs or alcohol is also alarming. One survey in 2012-2013 noted that nearly 23.3 million adults reported having diagnosed drug disorders in their lifetimes. That accounted for almost 10 percent of the adult U.S. population.

Sometimes, addiction, obesity, and other weight-related matters are connected. These connections can make the problems more dangerous and harder to address, although they have treatment options.

While such drugs may help someone lose weight, they might cause annoying or dangerous side effects that could include diarrhea or constipation, or even elevated pulses and blood pressure. The drugs can also be addictive.

Writing in Health magazine, Harmony Hobbs detailed her addiction to phentermine, a drug commonly used for weight loss. Although people need a prescription to obtain it, she learned that weight-loss clinics often prescribe the drug.

Originally using the drug to suppress her appetite and lose weight, Hobbs used the drug for much more. She used it for energy and to hide the fact that she was also abusing another substance: alcohol. Since phentermine stimulates the body and brain and alcohol depresses them, she was using the substances to balance each other.

Despite her efforts, though, she became addicted to alcohol and phentermine. She realized that neither was helping her fight her growing depression and unhappiness. Instead, they were making everything worse.

Prescription Drugs for Obesity and Addiction

Like Harmony Hobbs discovered, weight loss drugs might do other things as well. That’s because naltrexone can treat addictions to opioids or alcohol, while bupropion helps people reduce tobacco cravings and withdrawal symptoms.

Depressed people might look for something, anything, that can make them feel better, or at least not as hopeless. For some, drugs and alcohol play that role.

But that belief is a trap. Drugs and alcohol might make people feel different, but those feelings are temporary. When the effects of the drugs or alcohol fade, so do the good feelings that accompany them, and people might feel even worse than before. So they might use drugs again.

Furthermore, substances such as alcohol and opioids are depressants. Instead of making people feel better, they make them feel worse. Like Harmony Hobbs, they may turn to other potentially dangerous substances to compensate, introducing even more dangerous, volatile substances to their brains and bodies.

Speaking of volatile substances, prescription drugs aren’t the only things that people use to dampen their appetite or lose weight. There are countless over-the-counter (OTC) substances that their manufacturers claim can help people lose weight, reduce fat, burn muscle, or provide energy.

Manufacturers often bill these substances as dietary supplements and emphasize their natural ingredients. Many in fact do consist of more natural materials that include plants, herbs, fiber, vitamins, or minerals.

Some also contain ingredients such as caffeine, which is a naturally-occurring substance. But because caffeine is a stimulant, it might not be a safe substance for some people, or it might not be safe to use with other substances.

A number of dietary supplements once contained ephedrine, a naturally occurring substance found in ephedra plants. Similar to amphetamine, ephedrine is a stimulant that can produce severe health consequences: strokes, heart attacks, and sudden death, especially if people consume it with other stimulants. Because of these severe side effects, the U.S. Food and Drug Administration (FDA) banned dietary supplements that contained ephedrine in 2004.

That’s one of the problems with using over-the-counter dietary supplements to lose weight or burn fat. Unlike prescription drugs, the FDA doesn’t require testing supplements before people can use them.

People might not know how over-the-counter weight-loss substances will affect them because people didn’t try them in studies that recorded the side effects they experienced. The government can ban ingredients and request that products be taken off the market, but that’s after the fact, after the substances might have hurt people and maybe even hurt them severely.

If people abuse or become addicted to dietary supplements, they’re taking more of such substances that can produce harmful effects. This can be particularly dangerous because unlike prescription drugs, people don’t use OTC dietary supplements under the supervision of doctors.

When using over-the-counter substances, people might not be taking controlled doses of tested substances. They might not be under the watch of trained people who can spot if things are wrong and correct these wrongs. 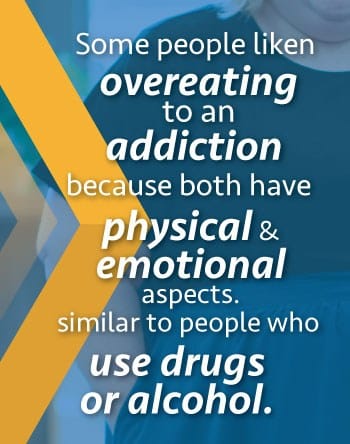 Since it’s illegal, people don’t use heroin under the supervision of doctors, either. But that doesn’t stop people from using it as a way to curb their weight.

Using heroin for weight loss is not a new phenomenon. In the 1990s, it appeared to be very common, so common that a phrase, heroin chic, emerged to describe it. Prominent models, actors and actresses, and musicians sported the look, which often wasn’t just thin but too thin or even gaunt.

Combined with pale skin, circles under the eyes, disheveled clothes and hair, and an overall look of unwellness, the skinniness of heroin chic resembled the thinness of people who use heroin. Even if people didn’t use heroin, it became a look that some emulated, because to many, thin = attractive, no matter how thin it is and the lengths they went to become thin.

Of course, people used — and people still use — heroin to stay thin. While not doctor-approved, heroin can curb people’s weights because it might:

Using heroin to control weight or for other prolonged purposes can easily lead to addiction. When someone is addicted to a drug or alcohol, they care so much about that substance that everything else (or almost everything else) comes second. For people with substance use disorders (SUDs), even something as life-sustaining as eating can’t compare to the lure of drugs or alcohol.

For some people who misuse drugs, their dependence produces the opposite effect. Their drug abuse makes them gain weight. Many people know that marijuana (cannabis) does this, as hunger known as the munchies can drive people to crave and eat junk food.

Because of its hunger-boosting and nausea-suppressing effects, people with cancer and other illnesses sometimes ingest marijuana. Other drugs that produce similar effects include medications formulated to increase the appetite for people with AIDS or growth disorders.

Many people go hungry to control their weight. Because they believe that thin people are more attractive, they might even stop eating to keep off the pounds or kilograms.

People with eating disorders might be so afraid to gain weight that they starve themselves or exercise obsessively to look thin. Eating disorders such as anorexia nervosa can produce many emotional and physical side effects, such as heart disorders that could be fatal.

Even if they don’t have a diagnosed eating disorder, some people practice disordered eating, behaviors that could include

These practices can be dangerous on their own, but some people combine them with another potentially dangerous practice: drinking alcohol.

Limiting one’s food intake (such as through skipping meals) to save the calories for alcohol is a practice known as drunkorexia.

It appears that the phenomenon is more common in women, since many women feel pressure to be thin. According to the University of Texas at Austin, 30% of women from the ages of 18 to 23 reported that they’ve restricted their diets in order to drink alcohol.

Drunkorexia is counterproductive and harmful because people

Women tend to have a higher percentage of body fat than males, so females’ bodies don’t dilute alcohol as quickly. Females also have less of an enzyme that processes alcohol. As a consequence, women become drunk or addicted more quickly than men and experience alcohol’s effects more rapidly.

Denying our bodies much-needed fuel is harmful. Drinking can also be harmful. Combining the two can be fatal.

Can You Be Addicted to Food?

While not eating enough can be dangerous (especially when combined with drinking alcohol), so can eating too much. There are ongoing debates as to whether people can have food-related addictions.

Some people liken overeating to addiction because both have physical and emotional aspects. Very often, people who overeat might feel ashamed about what they’ve done. To cope with this shame, they might eat even more, thus creating a dangerous cycle of shame and use.

Such behaviors are very similar to people who use drugs or alcohol: They feel bad about their substance use, but use more to soothe their emotions. The behaviors show why it can be difficult to treat overeating or addiction since both can become psychologically ingrained and feed off each other.

Overeating can also relate to physical changes in the brain. Researchers found that people who engage in repetitive behaviors might actually change the way their brains function, so repeated eating might create a physical trigger that compels people to eat even more.

But there are ways that people can manage their overeating. Some of the options resemble ways people manage their addiction.

One of these options is Overeaters Anonymous (OA). OA is a peer support program that operates similarly to other 12-step support organizations such as Alcoholics Anonymous and Narcotics Anonymous (AA and NA). All these groups feature:

People coping with overeating, addiction, and other mental disorders often benefit from ongoing support and socialization. OA can provide those things and more.

Support for Obesity and Addiction

No matter who we are or what problems we face, we all need support. It seems that we’re not getting it sometimes, though.

Western culture often idolizes the thin, but if approximately 71% of the U.S. population isn’t, there might be some conflict among people who look one way but feel they need to look another.

Some people consider addictions moral failings or bad choices and stigmatize people who have problems with substances or behaviors. Of course, this means that judgmental people are stigmatizing a large proportion of the population, since almost 23 million U.S. residents have had a diagnosed drug disorder at some point.

It’s clear that many people could use support. This support can help them find assistance.

To start providing support and assistance, we could shift our priorities. Instead of focusing on thinness (especially thinness at all costs), we should celebrate all types of bodies. We can focus on what they can do, not what they look like, or even worse, what society has said they should look like.

Obesity and addiction can damage people physically and emotionally, but this damage doesn’t have to be permanent.

Resources about addiction and eating disorders