Mental Health Guide to Those with Dissociation 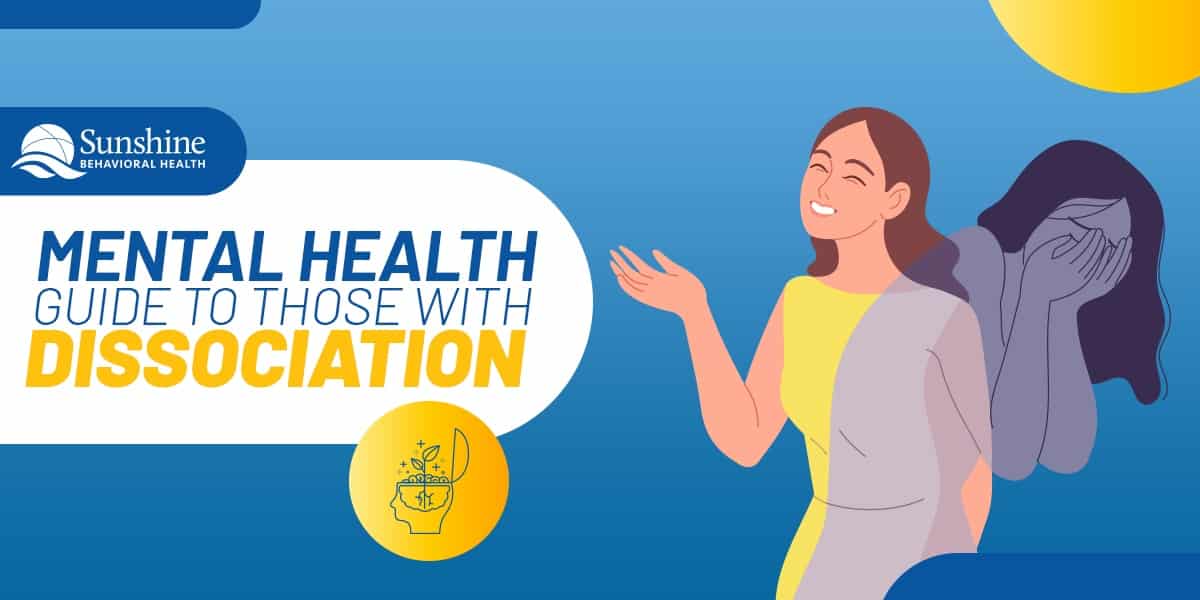 Although chronic dissociative disorders impact two percent of the population, their impact cannot be understood through statistics. Severe dissociation can prompt people to take on alternative identities, live in daydreams, and experience memory losses that can impact their entire lives and the lives of those around them.

These conditions can impact teenagers and adults alike. Many are driven primarily by traumatic experiences that can overwhelm people’s emotions and ability to process. It seems as if dissociative conditions might be shielding otherwise healthy people from painful thoughts and feelings, but the conditions can cause harm of their own.

Thinking about daydreaming could be a good way to understand dissociative disorders. Imagine you are looking out a window on a bright, sunny day, and your thoughts begin to wander. You feel yourself drift into an imagined fantasy where you play different roles or witness unrealistic events. Many people have this type of daydream.

Now imagine that short disconnection with the real world intensifies. You find yourself unsure of whether the daydream is imagined or real. Your thoughts, senses, and identity become disconnected, even blurred from reality, due to the way your mind is processing information. Emotions, your perception of time, physical surroundings, and recollections may become disconnected for hours, days, or weeks.

Shifts from a pleasant mental escape to an otherworldly experience may indicate that someone is experiencing a form of dissociation. Signs of a dissociative disorder could include the following:

According to the National Alliance on Mental Illness, as many as 75 percent of people experience at least one dissociative experience during their lifetimes. Approximately two percent of the population reportedly suffer chronic dissociation episodes.

Research indicates that women are more likely to develop a dissociative disorder, which may be linked to trauma such as domestic abuse, combat, or torture. Heightened trauma or stress may act as a trigger that worsens symptoms. It appears that the condition can act as a self-defense mechanism by blocking disturbing memories. 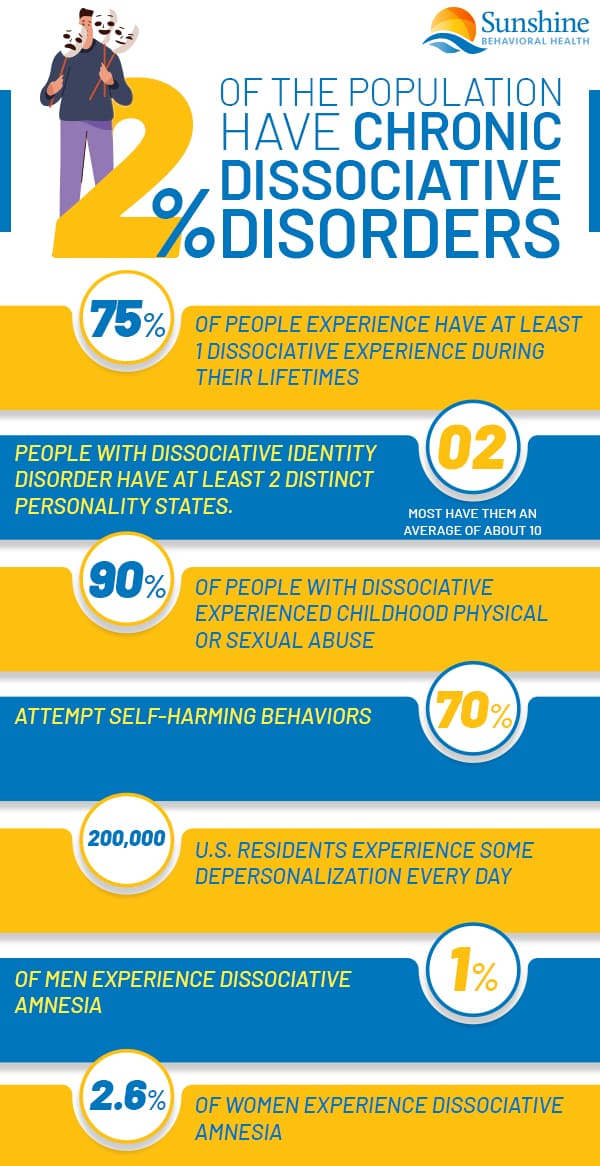 What You Need to Know About Dissociative Identity Disorder

Diagnosing dissociative identity disorder can be challenging. It’s essential to consider religious and cultural differences. Some religions include spiritual practices that may be labeled out-of-body experiences or possessions. These incidents might be part of religious practices and not necessarily a dissociation symptom.

Cultural differences must also be considered when determining whether someone requires treatment and care. People are less likely to be diagnosed with a disorder if they’re behaving within cultural expectations.

To understand the condition, the following are common symptoms associated with dissociative identity disorder:

Other signs someone may have dissociative identity disorder include abrupt shifts in attitude and personal preferences. For example, someone may suddenly state they dislike a favorite meal only to say they enjoy it a short time later. It’s also not unusual for someone with this condition to become childlike, experience a gender shift, or feel unusually powerful.

Different personality states may emerge to help the person deal with stress, challenging life decisions, and other things that they may find overwhelming. According to the National Alliance on Mental Illness Michigan, people with dissociative identity disorder may have as few as two distinct personality states and the average number of identified personality states is generally about 10.

Myths about mental health conditions persist, and dissociative identity disorder is no different. One common misconception about this disorder is that people can access their different identity states at will. In reality, personality shifts are entirely involuntary.

One harmful myth stems from a misconception that dissociative Identity disorder makes people violent and aggressive. Crime statistics do not support this conclusion and people don’t have criminal alter egos.

Finally, dissociative identity disorder is not the same as schizophrenia. People with schizophrenia have delusions, while dissociation is not considered a psychotic condition.

What Are the Risk Factors?

While its causes aren’t completely known, researchers have noted that about 90% of people with dissociative identity disorder in Canada, Europe, and the United States also experienced childhood physical or sexual abuse. Around 70 percent of people with the condition attempt suicide and many engage in self-harming behaviors.

Erratic behavior or neglect by parents and other adults can trigger the disorder. Powerful negative experiences and trauma can lead to increased risk.

What You Need to Know About Depersonalization Disorder

During depersonalization disorder, people feel as if they are observing themselves from the outside. They feel as if the physical world around them is not real and that they are living in a dream state.

Those with this condition might suffer strained relationships with friends and family members and have difficulty holding a job, among other impediments. Symptoms of the disorder typically start to occur when people enter their late teens to early adult years and could include:

Longtime depersonalization disorders are statistically rare, but approximately 50 percent of Americans reportedly experience one or two episodes during their lifetimes. While 200,000 U.S. residents experience some type of depersonalization on a given day, only two percent of the general population has heightened, chronic symptoms.

Another misconception is that schizophrenia spectrum disorders and dissociative disorders are the same. In reality, both are distinctly different conditions that require different treatment and care.

Finally, medication can’t cure dissociative disorders, but they might not last. People might have a few episodes in their lives or recurring ones.

What You Need to Know About Dissociative Amnesia

Approximately one percent of men and 2.6 percent of women have dissociative amnesia. Those with this condition tend to see heightened symptoms if they experience significant stress or traumatic events.

When people have dissociative amnesia, they’re unable to recall important information about pivotal life events. In many cases, memory loss can be limited to stressful or horrific events such as war, natural disasters, assaults, and abuse. In other instances, thematic memory loss may involve closely associated occurrences in their lives and personal histories.

In the most severe cases — dissociative fugue — someone can forget their entire life history or identity. Although dissociative amnesia has primarily been linked to experiencing or witnessing traumatic experiences or horrific events, genetic factors or environments may also play a role.

Three patterns of memory loss may occur during dissociative amnesia:

Everyday people routinely forget things that may seem unusual. These bits of forgotten information may include a coworker’s last name or important dates. Many of these miscues can be the result of being distracted, busy, or mildly stressed.

Small lapses in memory may not necessarily require an evaluation. But when memory loss appears selective or pronounced, a prompt examination could prove invaluable to detect and treat dissociative disorders.

Although people in someone’s orbit typically believe memory lapses are obvious to the individual, that’s not always true. According to the American Psychiatric Association’s Diagnostic and Statistical Manual of Mental Disorders (DSM-5) , many people with memory issues remain completely or only partially aware of the issue.

Other misconceptions include that a person is practicing selective memory recollection on purpose, that they’re willingly forgetting things. Still others compare the condition to permanent ailments such as Alzheimer’s disease. Many dissociative amnesia episodes last only days, while more severe patients have symptoms for several years.

How Are Dissociative Disorders Diagnosed and Treated? 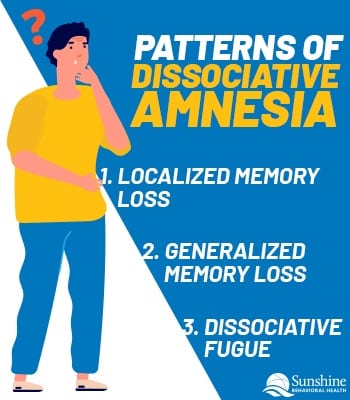 Medical professionals review symptoms and a person’s history to diagnose dissociative disorders. They typically perform a range of tests to identify or eliminate the possibility of any underlying physical conditions. Traumatic brain injury, for instance, can have a direct and discernable impact on cognitive abilities and functions. Other conditions that contribute to dissociation include irregular sleep patterns, tumors, and progressive brain ailments.

Once physical causes have been ruled out, cultural and spiritual beliefs must be examined and considered. Belief in deities or spirits can have an impact on the brain. With a complete history and understanding of belief systems, professionals work to identify past traumatic experiences that may have prompted a dissociative disorder.

Based on someone’s specific condition, the following treatments (or a combination of such treatments) may prove appropriate:

Because dissociative disorders often stem from some form of trauma, treatment plans may also address related conditions such as post-traumatic stress disorder (PTSD), depression, anxiety, and borderline personality disorder (BPD), and others.

Dissociative disorders can be difficult to live with, diagnose, and treat. But by taking different approaches to mental health and wellness, people with the disorders can find the treatment and care they need.