The 61 million members of Generation Z—those born between 1997 and 2012—self-report higher rates of mental health issues than any previous generation. Even though they are more likely to seek treatment for their stress, anxiety, depression, suicide, and substance abuse, they can’t always find it. The result is a lack of life-work balance, loneliness, and dreams deferred. 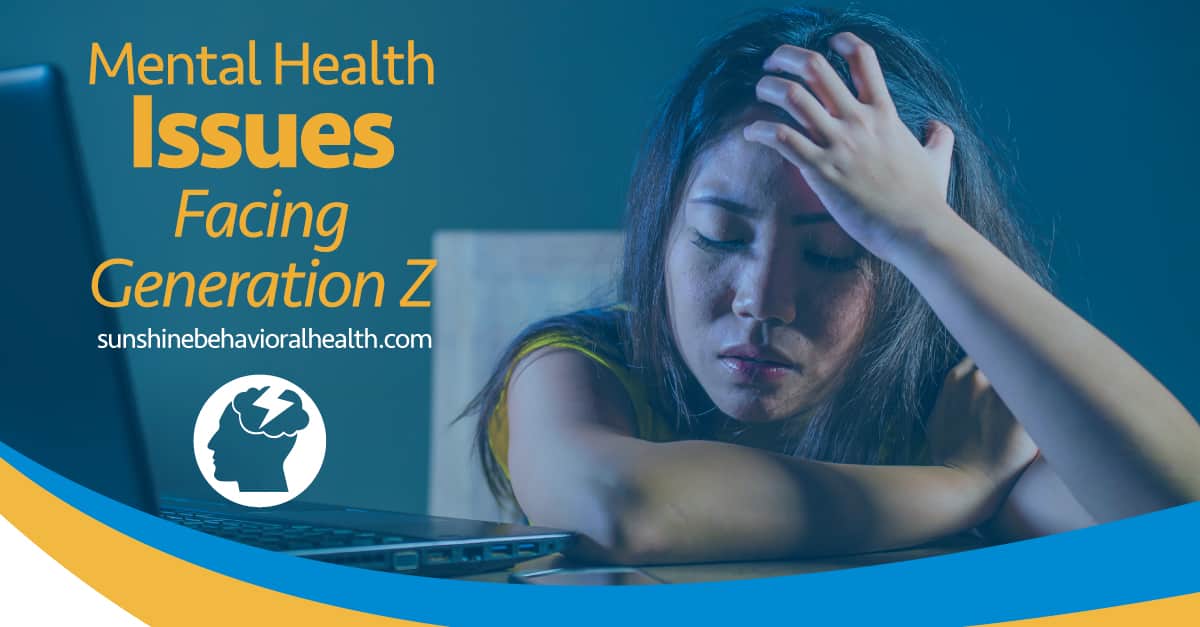 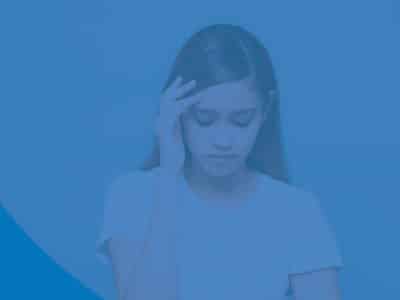 Generation Z is the group born between 1997 and 2012 or later. About 61 million people in the United States are Generation Z members, which is sometimes also called Generation K.

Less than half of this group says it experiences good or excellent mental health, studies show. In fact, the group has higher rates of stress, anxiety, depression, and suicide than any previous generation.

In a 2018 Harris poll, more than 90% of Generation Z adults indicated that they had experienced at least one physical or emotional symptom because of stress, such as feeling depressed or lacking energy. About half feel they adequately manage the stress.

A primary source of stress for Generation Z is the headlines. The survey found that 75% of Generation Z members were stressed by headlines and news reports about mass shootings. More than half of Gen Z students currently in school say they feel stressed when considering the possibility of a school shooting.

Gen Z members also are more stressed by other issues than are other generations. For example:

The COVID-19 pandemic is a major event that Gen Z adults will remember. Fewer than 20% of them rate themselves as happy since the pandemic began.

The chief medical officer (CMO) of a digital mental health company says this may affect them more than other adults. Other experts agree that  the pandemic may define their outlook.

Generation Z also is finding the isolation and work-from-home requirements of the pandemic stressful.

According to studies conducted by ReGeneration, Gen Z adults find remote work difficult to balance with family life. They would prefer to work from home only 1.5 days per week.

They also don’t feel Zoom is as effective as face-to-face communication and collaboration. They miss connecting with their friends and others. The isolation from the pandemic contributes to loneliness.

The pandemic also has hit this generation hard economically, which further contributes to stress.

Many Gen Zers still live with their parents and worry about their health. This worry creates additional frustration and stress. Six out of 10 youth live in households where at least some household member has lower income because of the pandemic.

Those who are still in school are concerned that they will fall behind with remote learning, and those in college are frustrated about paying for a virtual education, which they perceive as being of lesser quality.

In June 2020, 10.3 million young people (or about 28%) were neither in school nor in the workplace. This is the highest rate recorded since 1989 and is up from 12% before the pandemic. Some are graduating in the midst of the pandemic and struggling to find jobs while in debt for education loans.

The job loss for 16 to 24-year-olds stretches across all major industries. The leisure and hospitality industries are the worst hit, followed by education, financial services, manufacturing, and wholesale trade.

The disparities are worse for minorities, those at lower-incomes, and those with less education.

A study in the Journal of Abnormal Psychology showed that rates of adolescent depression increased substantially between 2009 and 2017.

The increases by age group were:

Suicide rates among adolescents, an effect of depression, are also increasing. Based on results from the Centers for Disease Control and Prevention (CDC) database,  suicide rates for those 15 to 24 increased in 2017 to their highest point since 2000.

A Journal of the America Medical Association (JAMA) study attributed the higher suicide rates on high social media and Internet use, which makes this generation more globally connected but also lonelier.

A 2020 Cigna Insurance study found that 79% of Gen Z, or adults in the 18 to 22 age group, said they felt alone. This is a higher percentage than any other age group and is an increase from 2019.

Statistics show relatively the same amount of loneliness whether Gen Z adults used social media and smartphones regularly or less frequently. What did lower rates of loneliness was regular and meaningful face-to-face contacts.

One consequence of depression among Gen Z adults is the tendency to self-harm or hurt oneself to relieve emotional distress. The most common forms of this are burning or cutting.

Not every Gen Z member who is depressed will harm themselves, but depression, especially in females, increases self-harm risk. Experts say that much of the self-harming revolves around body image; females harm themselves because they have poor image issues and others do it to rebel against conventional stereotypes.

Other reasons Generation Z tends to self-harm include:

Whiler self-harming is rarely associated with suicide, it can be especially dangerous if the teen also uses alcohol or drugs. Family therapy and group therapy that provides tools for managing moods can be helpful in treating the tendency to self-harm.

Anxiety also poses health issues for Gen Z. About half of this group say they feel stressed or anxious all or most of the time. Women feel more stressed than men (53% vs. 42%) and parents more than other adults.

One source of anxiety for this group is work. It can be competitive and demanding, leaving little time for themselves or their family.

A 2020 Mindshare Partners study found that the percentage of those who left a job because of workplace stress was:

Women and other minorities’ inability to feel comfortable being “authentic” at work was listed as a source of anxiety by more than 60% of Gen Z adults.

Lack of work-life balance is another source of anxiety. In fact, of those Gen Z members who plan to leave their jobs within the next year, 15% listed the inability to achieve work-life balance as a reason, according to a Deloitte study.

Another source of anxiety is school. A Canadian study conducted in 2016 showed that 65% of post-secondary students reported experiencing “overwhelming anxiety” in the previous year.

Finally, the path to success is less clear for this generation, which has delayed life goals from getting a driver’s licenses to getting married.

Drug Use by Gen Z

Although substance abuse in 2017 was down from previous years for teens and young adults, substance abuse disorders are still significant. A National Center for Drug Abuse Statistics survey in 2017 found that the percentage of those using illicit drugs in the past year was:

Alcohol Use by Gen Z

Although alcohol is illegal for anyone younger than 21, American teenagers consume about 11% of all the alcohol sold. An even greater percentage, 19%, between the ages of 12 and 20 use alcohol. About 12% of these are binge drinkers.

Binge drinking is when a male consumes five or more drinks in a two-hour period for men, or a four for a female. Ninety percent of the alcohol consumed by teens is while binge-drinking.

Alcohol also is a major factor in teen deaths by accident, suicide, and homicide.

Marijuana and Vaping Use by Gen Z

Marijuana is typically smoked in cigarette form or more recently vaped. Vaping is when a liquid is heated in an e-cigarette or vaporizer, often called a vape pen. This liquid is sometimes just flavored liquid but it can contain nicotine or marijuana.

More than one-third of high school seniors use marijuana and 39% of college students, the highest rate in decades.

Opioids Use by Gen Z

Opioids include prescription painkillers and illegal drugs such as heroin. While opioid misuse (in excess of prescribed amount or without a prescription) rates among teens was relatively low and had been decreasing, it still exists.

The good news is that Gen Z teens and adults are more likely to seek help for their mental health and substance abuse issues than previous generations. Some of that is because mental illness is beginning to lose some of its stigma.

Experts credit celebrities who have used social media to talk about their mental health issues and how they received treatment with helping to remove the stigma.

The willingness of Gen Z adults to seek treatment for themselves will help them be better parents. Treatment helps them learn to speak openly about their emotions and model that for their children.

The bad news, however, is that most youth and children who need mental health services do not receive them. This is particularly true of minority youth who are about one-third as likely to receive necessary treatment as white children and youth.

Other reasons why children and youth fail to receive needed treatment is:

Failure to receive treatment has long-term implications for the children, their families, and society.

Those who exhibit behavioral problems yet a young age are much more likely to have mental health and relationship issues later in life. These include:

For minority families, the challenges are greater because of issues such as discrimination and poverty. Minority children are also believed to be at greater risk of mental health issues because of socioeconomic stressors affecting their family and daily lives.

Mental health providers are seeking ways to address these cultural and contextual barriers.

Youth.gov suggests that when parents are seeking services for their youth or teen that ask several questions to determine the provider’s experience in working with other children with similar issues, the philosophy and approach of the program, and how they will be involved with the treatment.

They also suggest parents ask how long treatment will last, how they will know whether their child is improving, and what they can do at home to facilitate the treatment.

NIDA for Teens  – Have a drug problem—need help?