Mental Health Resources for Those Charged with a DUI

One sign of a substance use disorder is getting in trouble with the law. A person facing impaired driving charges may not only want legal counsel, but some mental health help as well. Read on for resources. 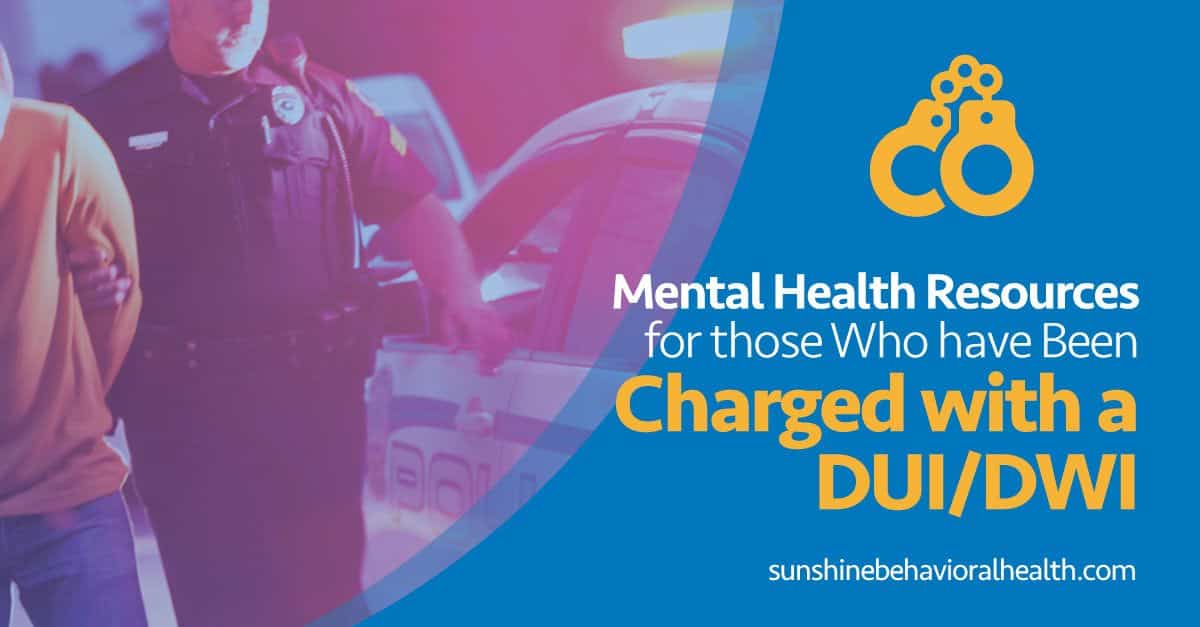 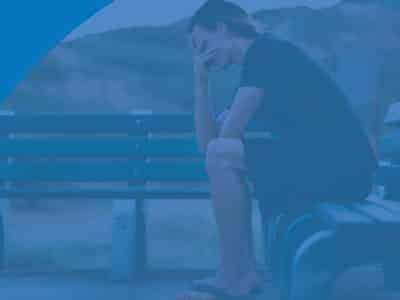 There are a number of signs that a person has a drinking or substance use problem. Engaging in dangerous activities — like driving — or getting arrested while under the influence are two major red flags.

If a person finds themself facing the long arm of the law after over-imbibing, it may be time to consider seeking help, either from a mental health or legal professional — or both.

Driving while impaired (DWI) or driving under the influence (DUI) affects both one’s judgment and how they perform behind the wheel. Basically, a person is likely to be drunker than they think they are.

In theory, people should know better. Many drivers admit to engaging in bad behaviors despite the risk.

Despite the toll impaired driving exacts on our society, it remains a real problem.

Thousands of lives are lost every year in impaired driving crashes. For 2010, drunk driving accidents cost the economy an estimated $44 billion. Nearly one-third of 2018’s traffic deaths were the result of drunk driving. Across the U.S. and in Puerto Rico, a blood alcohol content (or concentration) (BAC) of 0.08 or higher is considered legally over the limit when behind the wheel.

BAC is the amount of alcohol in a person’s bloodstream. (Breath can also be measured; in that case it’s Breath Alcohol Concentration.) Measured by blood or by breath, it’s the weight of ethanol in grams, per 100 milliliters of blood or 210 liters of breath. Urine tests are an option, too. Those can detect alcohol up to 48 hours after one’s last drink, nearly twice as long as a breath test can.

No one person metabolizes alcohol the same. A person’s weight, gender, and percentage of body fat all factor in to how they’ll process that drink. Whether a person drinks on an empty stomach or is on medication can affect how fast they’ll feel buzzed, too.

BAC Behind the Wheel

As a person’s BAC rises, typically their judgment and their driving ability go down. The effects of varying BAC levels include:

Levels higher than 0.15 make a person more likely to vomit, experience dysphoria (feeling unwell), or have trouble walking. Once levels reach 0.25 and over, a person is at risk of alcohol poisoning, losing consciousness or even going into a coma. Respiratory failure is possible then, with the danger of brain damage or even death a real possibility.

Not all substances have the same effect on driving. Drugged driving is a very real concern. Marijuana can also slow a person’s reaction time, and affect how a person judges time and perceives distance. Cocaine or methamphetamine can make a person more reckless and aggressive behind the wheel. Benzodiazepines and opioids can make a person fuzzy-headed, drowsy, and dizzy.

For 2018, the National Survey on Drug Use and Health (NSDUH) found that 20.5 million people ages 16 and older operated a vehicle under the influence of alcohol, and 12.6 million drove after taking drugs.

Marijuana is the most used drug — after alcohol — among crashed drivers. It’s still unknown just how much cannabis affects drivers, since the delta-9-tetrahydrocannabinol (THC), its primary psychoactive component, stays in the body for days — and sometimes weeks — after use, so a person with a positive drug test may not always have been partaking shortly before a crash. It’s still considered risky, not to mention it being an illegal combination. Plus, pairing marijuana with alcohol, cocaine, or benzodiazepines appears to amplify the risks.

For a time crashes were down, but the National Highway Traffic Safety Administration found that despite alcohol-fueled fatalities being down in 2019, more drivers seem to be engaging in risky behaviors since the COVID-19 pandemic. NHTSA also found that more than 63% of drivers in fatal or near-fatal accidents had alcohol or at least one other drug in their system. That’s up from 50% prior to the pandemic. About one in five people in these crashes had a blood alcohol concentration of .15 or higher. That becomes more concerning when one considers traffic volumes were down during the peak of COVID shutdowns, but the number of crashes did not decrease comparably.

Why Do People Drink/Do Drugs?

Why one person’s substance use tapers off on its own (for a fair amount, it does) or it snowballs into addiction, it’s not quite clear. One may try drugs or alcohol for any number of reasons:

Risk Factors for Substance Use

There’s no one reason that can make a person more prone to dependence. There are some indicators, however, that point toward a higher likelihood of developing a substance use disorder. 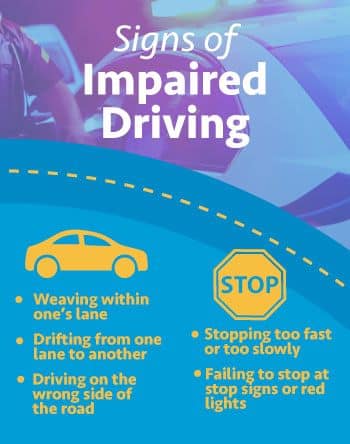 Dual diagnosis is when someone has a mental illness and substance abuse problem at the same time. It’s also called a co-occurring disorder or co-morbidity, but that term is used less often these days.

A dual diagnosis can be mild depression brought on by binge drinking, or bipolar disorder made worse by substance abuse.

Someone with a mental health issue may resort to drugs or alcohol to self-medicate, or they can make a mental disorder worse with substance use. Drugs — including alcohol — affect a person’s moods, thoughts, behavior, and brain chemistry.

Men are more likely to have co-occurring disorders. People with lower socioeconomic status, military veterans, and people with some medical illnesses are prone to dual diagnoses as well.

Risk-taking conduct can factor here as well. Some people with mental illness — including individuals with schizophrenia and bipolar disorders — are more prone to dangerous behaviors, including driving under the influence.

Most people know reckless driving when they see it. Signs of impaired driving include:

The summer season — stretching from Memorial Day through Labor Day — is also riskier. AAA calls it the 100 deadliest days.

Bars or businesses that sell alcohol tend to be more dangerous areas to drive, too.

Certain populations are at greater risk for vehicular crashes. Young drivers, lacking experience and being more prone to engage in dangerous behaviors, are especially vulnerable.

Speeding, drinking and driving, and distractions are top concerns.

Even though the legal drinking age is 21, many people get their first taste of illegal or illicit substances at a younger age. For 2019’s NSDUH, nearly 40% of youth ages 12-20 said they’d had at least one drink in their lives. Nearly 20% admitted to drinking in the past 30 days.

One out of every four teen car crashes involves an underage driver who’d been drinking.

The populations most likely to drive under the influence are:

Does a DUI Affect Mental Health?

Some risk-taking behavior is more common among some people with mental illness, and substance abuse is one thing they may resort to.

Depression seems to increase episodes of drinking and driving

Researchers have found that a conviction affects one’s physical health. It doesn’t even have to result in jail time.

Being arrested also puts a strain on mental health. Even for an arrest and release, while some might find that inconsequential, findings indicate otherwise.

Probation and fines alone can negatively affect mental health, particularly increasing stress and depression. There’s guilt, too, stemming from any number of things, from whether a person caused a death or injury, or the damages and fines incurred, and the potential loss to reputation

Alcohol use disorder and depression are no strangers to one another. Alcohol can worsen mood, and depression can lead to increased alcohol consumption.

Alcohol can provide a little high or surge of energy that depression victims enjoy. Alcohol however can make depression worse, so a person may drink more to ward off those feelings.

Driving under the influence is a charged issue. It has destroyed lives — both for the person behind the wheel as well as for its many victims.

One could even call the DUI driver a victim — not so much of putting the key into the ignition, but rather of something larger. What drove this person to drink too much or to overdo some substance in the first place? Sometimes it’s an error in judgment, but sometimes it’s a sign of a greater problem. Why did they overdo it? And if this is common behavior, why do they overdo it repeatedly?

Studies have found that many offenders also cope with some form of mental illness. The reverse applies, too, that some people with a mental disorder try to self-medicate with drugs or alcohol (or both) and then get behind the wheel.

Building awareness and stricter laws have reduced the number of crashes and deaths over the last few decades. That’s a sign of progress, but more work needs to be done. Not just in the courts or the classroom, but also perhaps through mental health screenings or treatment for substance use disorders, mental disorders, or in some cases, both, to get to the bottom of why a person can’t stop at one or two before getting behind the wheel.

States will have options as well, particularly for people charged with impaired driving. That may involve screenings for alcohol or drugs, substance abuse evaluations, or alcohol highway safety courses — more commonly called “DUI classes.” States’ health departments or departments/bureaus of motor vehicles may have resources as well.

The Governors Highway Safety Association has information on impaired driving laws and penalties, too.