Sexual assault continues to be a significant issue in emotional, physical, legal, and public health ways. While sexual assault can produce or worsen mental health conditions, there are many mental health resources available for survivors and their loved ones.

Mental health is a significant and complex part of health care. As stigmas surrounding mental health have begun to fade, resources have emerged to address mental health conditions, including issues related to sexual assault.

More common than people realize, sexual assault can also lead to a variety of short-term and long-term issues, such as shock, shame, isolation, guilt, confusion, anxiety, and depression.

Examining the statistics related to sexual assault can help people understand its relationship to mental health issues. Such education can remind survivors and loved ones that they’re not alone and that they have resources available to assist them.

The Statistics Surrounding Sexual Assault: What Should People Know?

Sexual assault can impact anyone at any time:

Statistics indicate that sexual assault affects people of all socioeconomic backgrounds, genders, and ages. It’s critical to understand the impact sexual assault can have on someone’s mental health.

By understanding the problems that might arise, it’s possible to get a better idea of what resources might be available to assist those in need. What are a few major examples of health problems that survivors of sexual assault might face? 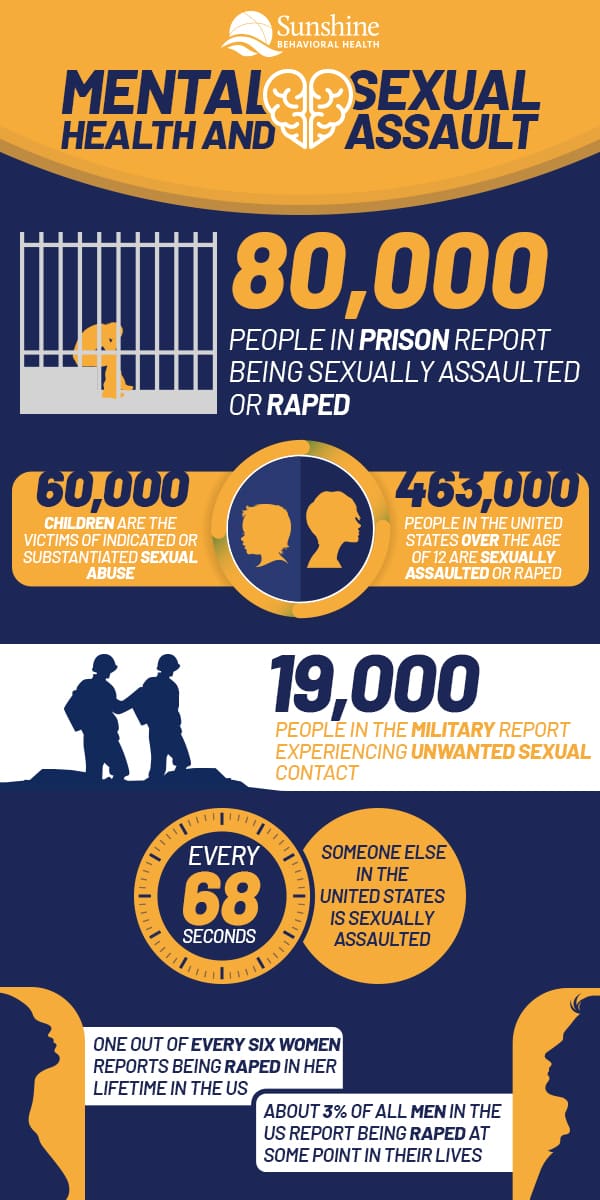 Depression is one of the most common mental health illnesses in the United States. When depressed, people feel sad, hopeless, and empty. The condition can be so serious enough that people consider or attempt suicide.

Survivors of sexual assault have a increased risk of developing depression because they might be experiencing shame, guilt, and other feelings after surviving the incidents.

A few common symptoms of depression include:

It is important for anyone who is experiencing these symptoms to seek assistance as quickly as possible to prevent suicide attempts. The earlier depression is detected, the sooner it can be treated.

When a survivor of sexual assault seeks treatment for depression, one of the first steps is to learn more about the circumstances that led to depression.

In many cases, therapy (such as cognitive-behavioral therapy, or CBT) can be combined with prescription medications that can help survivors of sexual assault effectively manage depression. Such approaches can lead to a significant improvement in their overall quality of life.

Another common mental health disorder that can develop in people who have survived sexual assault is post-traumatic stress disorder, also known as PTSD. Anyone who has been a victim or witness of a life-threatening situation, including sexual assault, can develop this disorder.

Examples of violent acts that could lead to PTSD include sexual abuse, rape, domestic violence, and molestation.

Coping may become even harder if survivors are in such pain that they avoid people who are trying to help them. Instead, they might use less healthy mechanisms to deal with their pain. If the mechanisms include alcohol or drugs, it could lead to substance use disorders.

If they’re trying to figure out if they have a substance use problem, survivors of sexual assault could ask themselves a few questions:

Answering yes to any of these questions is a sign that a person may be suffering from a drug or alcohol problem.

Pain from such conditions is real, but it shouldn’t be minimized or shamed. Instead, it should be treated.

Anorexia nervosa, commonly shortened to anorexia, is an eating disorder that is characterized by excessive weight loss and self-starvation. People with anorexia do not eat enough food, leading to significant weight loss.

Bulimia nervosa is another eating disorder. This condition is characterized by a cycle of binging and purging.

Typically, people with bulimia eat large amounts of food. They then feel a tremendous loss of self-control over their eating behaviors and use mechanisms such as diuretics, laxatives, or vomiting to purge the food and calories from their bodies. Like people with anorexia, they are also preoccupied with their body weight and shape.

They feel like they’re out of control as they eat tremendous quantities of food in a short amount of time. After they finish, they often feel tremendous distress, guilt, and shame.

Failure to address eating disorders quickly can lead to serious physical health concerns. Because survivors of sexual assault are prone to developing eating disorders, it is important to reach out to trained medical and mental health professionals for assistance.

Anxiety is common in everyone. In 2018, 6.68 percent of people in the United States experienced some type of anxiety.

The condition is also common among survivors of sexual assault. They may develop anxiety for several reasons, including:

Because survivors of sexual assault may develop anxiety, it is important to understand how it may appear. A few common symptoms of anxiety include:

Since there are different types of anxiety disorders, there are also different treatments. Multiple types of therapy that can be helpful to treat anxiety. They are also prescription medications that can help people control low levels of background anxiety as well as acute panic attacks.

What Mental Health Resources Are Available for Survivors of Sexual Assault? 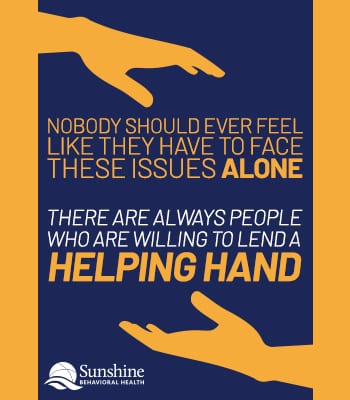 They might also find it helpful to speak with supportive family members and friends to discuss what happened. They can also speak with trained mental health professionals who can help them develop a comprehensive treatment plan and tools for managing their lives.

Helpful resources available for survivors of sexual assault include:

Nobody should ever feel like they have to face these issues alone. There are always people who are willing to lend a helping hand. From family members to friends, medical professionals, mental health professionals, and nonprofit organizations, survivors of sexual assault have resources available to them.

A few additional helpful resources include: