Cyberbullying or electronic bullying is a growing problem that destroys young lives by exacerbating or causing mental health and substance use disorders. To prevent those harms, take precautions before cyberbullying starts. 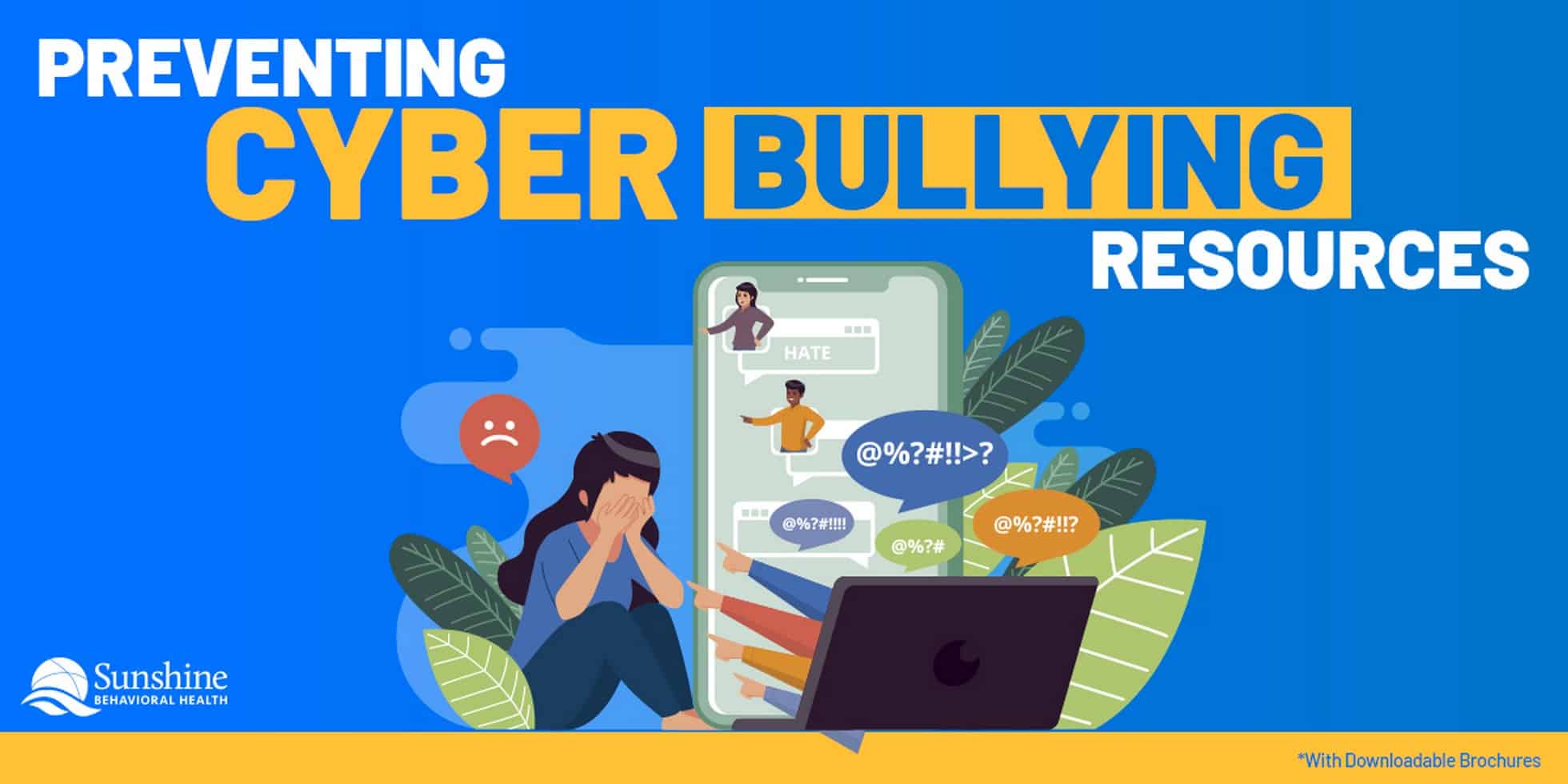 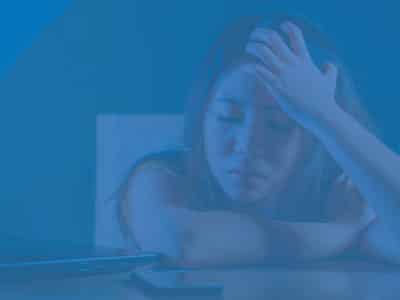 Cyberbullying is a problem, but how big or significant a problem remains to be determined.

Its apparent growth may be due to the increased prevalence of electronic devices, the obsession with going online and staying connected, and the awareness that these factors could cause problems, including exacerbating mental health issues such as substance abuse.

According to some surprising cyberbullying statistics, the rate of the problem may be declining. Statistics from the Centers for Disease Control and Prevention (CDC) show the rate of cyberbullying among high school students was 14.5% in 2017, down from 19% in 2016.

But the Cyberbullying Research Center says in 2019, lifetime reports of cyberbullying were 36.5%, an all-time high.

Cyberbullying or electronic bullying is bullying that does not happen in person but via electronic devices—laptop or desktop computers, smartphones, tablets—and as much as 92% via online forums and message boards—Facebook, Twitter, Instagram—public or private.

Not every mean thing posted on social media is cyberbullying, just like not every mean or insensitive comment at school or a social gathering qualifies as bullying. The generally agreed-upon legal definition of bullying requires three elements:

Individuals involved in bullying or cyberbullying involvement include bullies, the bullied, and bystanders. Sometimes bullies are themselves bullied, creating another category: bully-victims.

There are many types of cyberbullying, including:

Recognizing the Signs of Cyberbullying 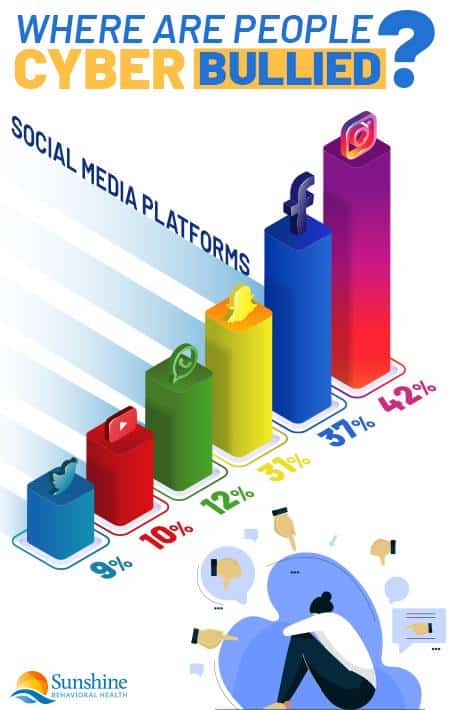 To deal with cyberbullying, people need to know it is taking place. But identifying cyberbullying can be difficult because:

Since cyberbullying is so easy to accomplish and avoid the consequences, it must happen more often than traditional bullying, right? Not according to most studies.

When only surveying teens, as much as 59% report some form of cyberbullying in one 2018 survey, including:

That disparity means efforts to fight cyberbullying should not divert resources away from traditional bullying. Instead, the goal should be ending all bullying behaviors, on or offline.

Some of the reasons for these widely diverging numbers may include:

More and better research is needed. That includes diversity.

Cyberbullying rates for women are twice as high as for men. For girls, the rates are 2.6 times as high. More than half of women have received unwanted, sexually explicit images electronically.

The cyberbullying rates for LGBTQ or transgender individuals compared to cisgender is also higher, as is the rate for nonwhite over white.

Who Cyberbullies and Why? 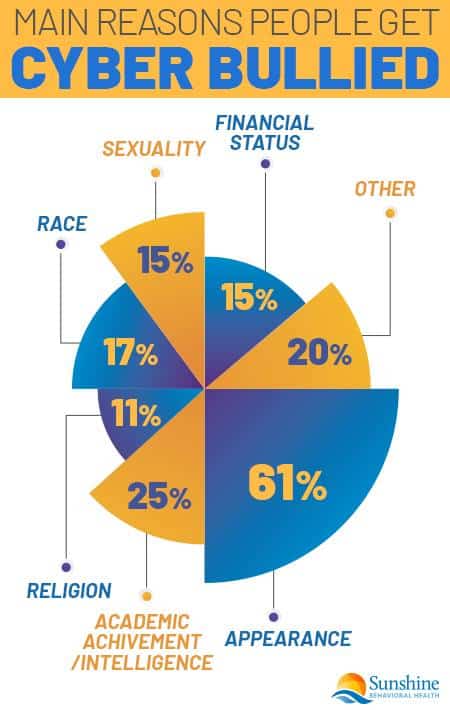 One common factor among young people is that the bully is seven times more likely to know the bullied person very well—to be a current or former friend or love interest—than to be a stranger. With adults, almost two-thirds of cyber-harassers know their victim.

A 2008 study of freshmen at Bridgewater State College found that 20% admitted to cyberbullying in high school. Their most common motives were:

Some cyberbullies do not see themselves as cyberbullies. They do not realize the harm they can cause or see it as a harmless joke.

Signs That Someone Is a Cyberbully

Parents who suspect that their child is a cyberbully should look for signs, such as:

If their suspicions turn out to be accurate, parents should not overreact. They will almost certainly need to block all online access—except possibly for schoolwork—for a probationary period, but that should not be the only measure they take.

The parents must find out why and to what extent the cyberbullying took place and ensure that it does not happen again. They should explain why it was wrong. Then, they could require the child to write an essay detailing:

This approach may encourage long-term changes in behavior.

Almost everybody experiences bullying at some point in their lives. In many cases, being bullied teaches resilience, builds strength, and prepares them for adult life.

Cyberbullying may have worse consequences than traditional bullying, however. While there may also be a physical threat of violence associated with in-person bullying that is not possible in purely electronic bullying, cyberbullying may include other distressing elements that make it hard to avoid, such as:

Also, it is not always true that words can never hurt us or that what does not kill us makes us stronger. Cyberbullying and online harassment may have severe long-term consequences, such as:

The worst possible outcome of cyberbullying is that cyberbullied individuals take their own lives. No one knows for sure, however, how much or even if cyberbullying causes suicidal behavior. Both rates have been rising for at least the past decade:

More recent figures indicate that the overall suicide rate in the U.S. decreased 5% from 2019 to 2020, but those provisional results did not look at rates among different age groups.

Regardless of whether there is causation:

There seems to be a link between being bullied, electronically or in person, and those mental health issues such as depression, anxiety, and substance use disorder.

In one study, almost 50% of adolescent psychiatric patients experienced cyberbullying. They also reported higher levels of depressive symptoms. Other studies found that between 5.4% and 11.2% of teens were both bullies and victims.

However, no consensus exists on which problem came first and caused the other. It may be that bullied people suffer mental health issues because of it.

Targets of cyberbullying often do not tell anyone—friends, family, or teachers—about the cyberbullying. Among adults who have been harassed online, only 39% told anyone, asked for help, or even attempted to resolve the situation themselves.

One common reason cyberbullied teens keep quiet is the fear that their parents will try to protect them by taking away their electronic access.

Regardless of the cause and effect, a 2017 study found that bullying in fifth grade led to more depression in seventh grade and more substance use by 10th grade.

One reason could be the self-medication hypothesis, that some people use alcohol and drugs to treat depression, bipolar disorder, or schizophrenia symptoms.

Another possibility is that bullied teenagers band together with other youths—any youths, even if they are not really friends or share interests or even like each other—for protection, bow to peer pressure, and use the same drugs. Because of their depression or other mental health issues, they have not established wider friendships or explored other interests. 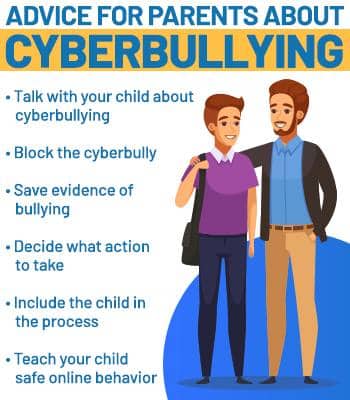 It is not possible to completely prevent the risk of cyberbullying. In 2015, teens spent up to nine hours a day using electronic devices (including streaming music and videos). Even if individuals stay off social media entirely, cyberbullies can still text other people about those individuals or set up fake accounts in their names.

Parents can play important, preventive roles in minimizing these risks, such as:

Having the support and friendship of peers is also a protective factor against online victimization.

Advice for Parents on Cyberbullying

When cyberbullying is suspected, detected, or reported, do not react immediately or respond in kind. Instead, take a deep breath and consider a more moderate approach:

As with most complex problems, no one solution is correct for all cases of cyberbullying.

When physical or psychological harm has occurred, legal action may be necessary.