Suicide and Substance Abuse: Resources on How to Identify the Signs

Suicide and substance abuse are often linked, so understanding these relationships and identifying their signs can help people determine if people are having problems related them and develop ways to help them. 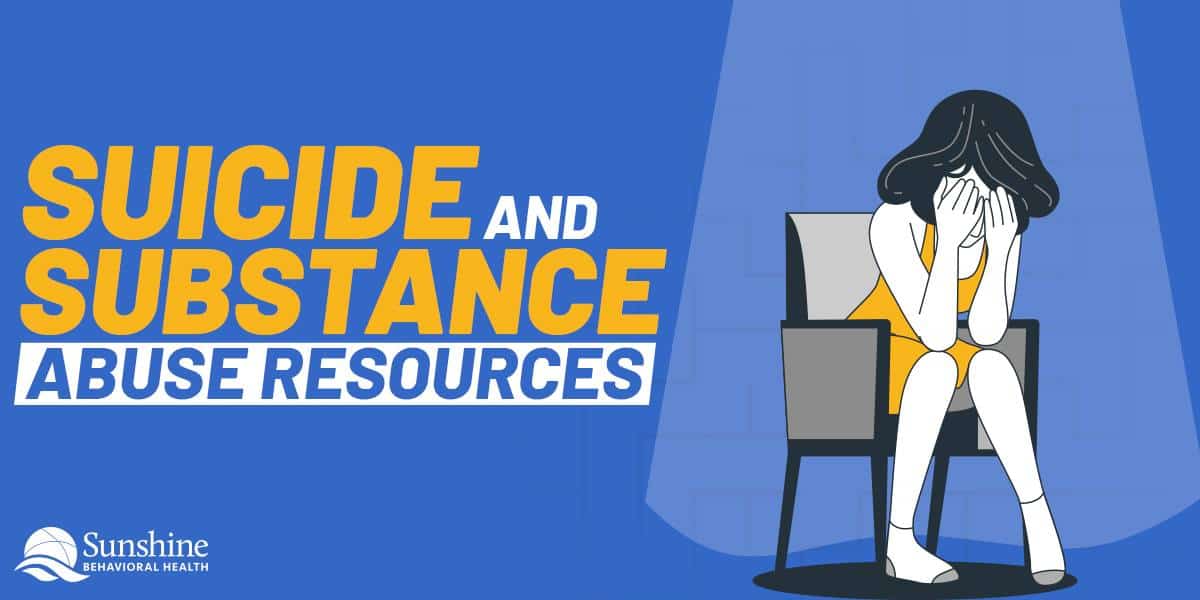 Feeling hopeless, some people turn to drugs and alcohol as coping mechanisms. Others feel that nothing can help them. They think about suicide, make plans to kill themselves, and take their own lives.

The scenarios are common and connected and could function as a cycle.

People might be depressed, use alcohol, become even more depressed, drink more, and become so depressed that they begin to form suicidal ideas (display signs of suicidal ideation) and make plans to kill themselves, often while continuing to drink. Suicide might follow.

Certain signs might indicate that people are thinking about killing themselves. They could be serious about suicide if they:

Some people might not exhibit any signs, while others might display more than one. If people notice such signs in themselves or others, they should seek immediate assistance. 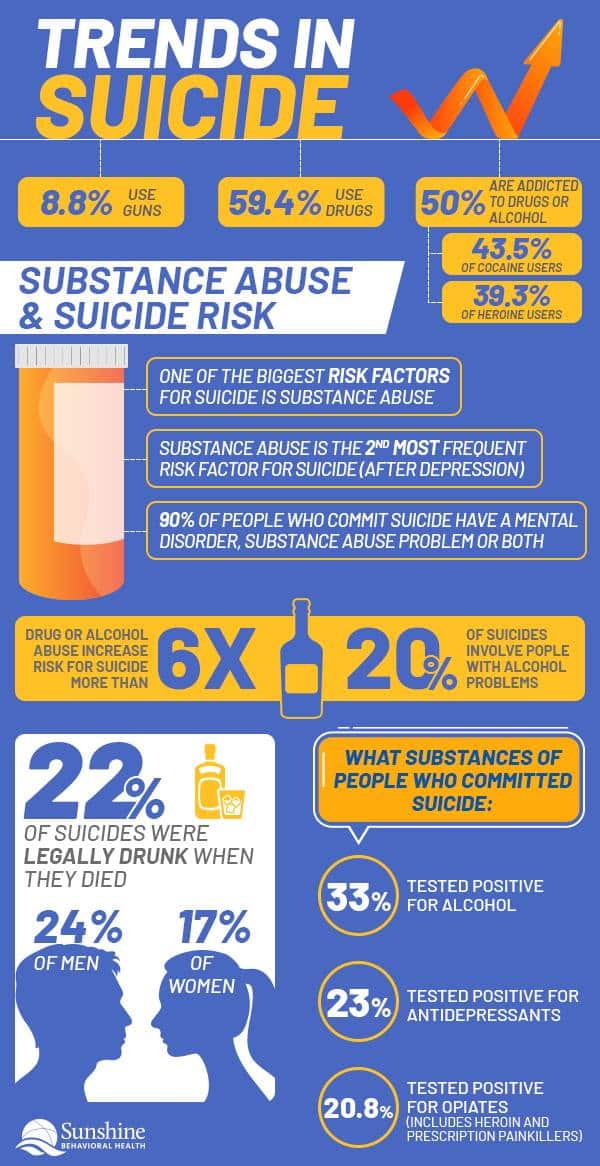 Factors that increase the risk of suicide

In addition to suicide warning signs, there are certain factors that might elevate a person’s likelihood to kill themselves. They include:

A family history of suicide or child maltreatment

Family histories of suicide could increase the odds of suicide. One study examined 243 people who had suicides in their families and found that:

Other familial and social factors may influence suicide. Childhood maltreatment occurs when people under the age of 18 experience neglect or physical, sexual, and/or emotional abuse. Researchers who examined several studies found that:

Such attempts may be common, as researchers estimated that 12.5% of U.S. children experience some form of child maltreatment.

A study of 1,490 people who received medical attention for suicide attempts found that 81 later killed themselves. In this group of 81 people, 48 of the people died after the attempt and 27 of the remaining 33 people died by suicide within a year.

Mood disorders and suicide often have close connections. According to some estimates, around 60% of people who kill themselves also have a mood disorder such as bipolar disorder, major depression, or dysthymia (longer-lasting mild depression).

Other mental illnesses are linked to suicide. Of the people who had attempted suicide in one survey, more than 70% had some sort of anxiety disorder. The likelihood of suicide was stronger for people who had both personality disorders that led to unhealthy ways of acting and thinking as well as a panic disorder or post-traumatic disorder (PTSD).

Sometimes, people kill themselves because they can’t bear the pain and other symptoms of their physical illnesses.

Pain is also connected with other factors that can cause self-harming behaviors. For example, physical pain can cause or worsen depression leading to suicidal thoughts and eventually suicide. Or people might use drugs and alcohol to cope with pain but become addicted to such substances. Those addictions can make it more likely for one to commit suicide. 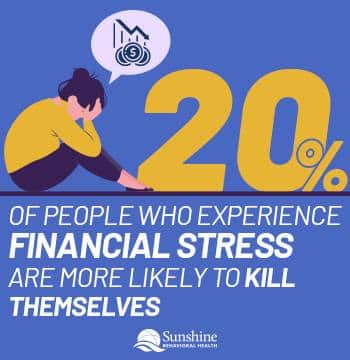 Depression and other mental illnesses can contribute to hopelessness, impulsiveness, and aggression. If people are depressed, they might lose hope. They might engage in impulsive or aggressive behavior because they feel that their lives aren’t worth living and they don’t fear the consequences.

In one study of people hospitalized for suicidal thoughts, 91% of the people who later killed themselves scored a 10 or higher on the Beck Hopelessness Scale. This scale consists of 20 statements that respondents mark as true or false. It explores how people feel about expectations, motivation losses, and the future, and can help determine how hopeful people are.

Isolation might contribute to hopelessness and suicide. Because of the COVID-19 pandemic, people have been encouraged to stay home or have been reluctant to go out.

Staying home may reduce the risks of catching a contagious virus, but it may also increase feelings of loneliness and isolation and eventually lead to suicide. Distress due to isolation and other aspects of COVID-19 have contributed to the suicides of many people since the beginning of 2020.

COVID-19 deaths are reminders that suicide isn’t an isolated incident. Aside from pandemic-related suicides, members of other groups have been taking their lives in large numbers.

One of these groups is females. According to the Centers for Disease Control and Prevention (CDC) and its National Center for Health Statistics:

U.S. women who were 75 and older were the only group to see declines in the suicide rate from 1999 to 2017, indicating the growing problem of suicide in many groups.

Despite the COVID-19 pandemic’s negative effects on mental health, many people have had trouble accessing adequate mental health treatment. These barriers can mean the difference between life and death.

Some traditional barriers to mental health treatment include:

When they have suicidal thoughts and behaviors, people are struggling. If they find it difficult to access care, they might not receive it.

Loss can also lead to suicide and other negative outcomes. Divorce is a type of loss. Different studies indicate that:

Unemployment and financial worries are also losses that may drive suicide. Financial stressors may include:

Scholars have noted that if people experienced all four of these stressors, they were 20 times more likely to kill themselves than people who didn’t experience any of them.

Easier access to lethal methods could increase the odds of people taking their own lives. Studies of U.S. suicide attempts from 2007 to 2014 indicate that:

While people use guns less often in suicide attempts, when they do, the results are more likely to be deadly.

Unwillingness to seek help due to stigmas

Compassionate mental health assistance can prevent people from killing themselves and other adverse outcomes.

Stigmatization can lead to isolation, hopelessness, and other negative feelings. Negative feelings can make it more likely that people think about killing themselves or actually take such actions and less likely that they’ll seek assistance to deal with these thoughts and actions.

Alcohol or other drug misuse 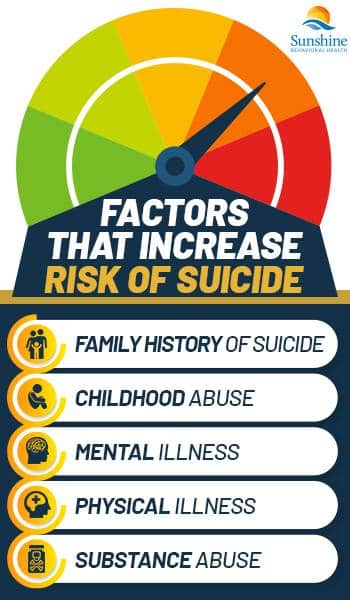 Alcohol and some drugs are depressants. That means they slow processes in the body. If people are already depressed and use depressants such as alcohol, they can become so despondent that they try to kill themselves, think about suicide, or make suicide plans.

How prevalent is substance misuse and suicide?

The combination of suicide and substance abuse is common:

Drugs and alcohol increase the odds that people will hurt themselves.

How addiction increases the risk of suicide

Physical effects from alcohol and drugs can make people feel more depressed, isolated, and suicidal. So can the psychological effects of substance abuse and addiction.

Addiction can control many aspects of people’s lives. Satisfying their cravings for alcohol or drugs may become their main focus.

But being drunk or high is temporary. When the effects of alcohol or drugs fade, people might be depressed, feel ashamed of themselves, and worry about their addictions.

With those concerns, people might use more alcohol or drugs as coping mechanisms. But once the effects fade, their concerns might increase or even intensify, prompting additional substance misuse and addiction. This cycle is common, as about 30% of teenagers who have depression also have a problem with abusing drugs or alcohol.

Substance abuse, addictions, and suicides might be linked because:

Certain substances may be tied to suicide and other negative outcomes.

The connections between alcohol and suicide are strong:

Cannabis (marijuana) use and the presence of coexisting disorders can prompt thoughts of suicide. Among women who have had major depressive episodes and cannabis use disorders, 23.7% had developed suicide plans in the previous year, while 15.6% men who met the same criteria had such plans.

Studies of the National Surveys on Drug Use and Health determined that:

Signs of substance abuse can be similar to signs of suicidal thoughts because both involve:

Recognizing such signs can help people address problems before they worsen.

How to help someone avoid suicide 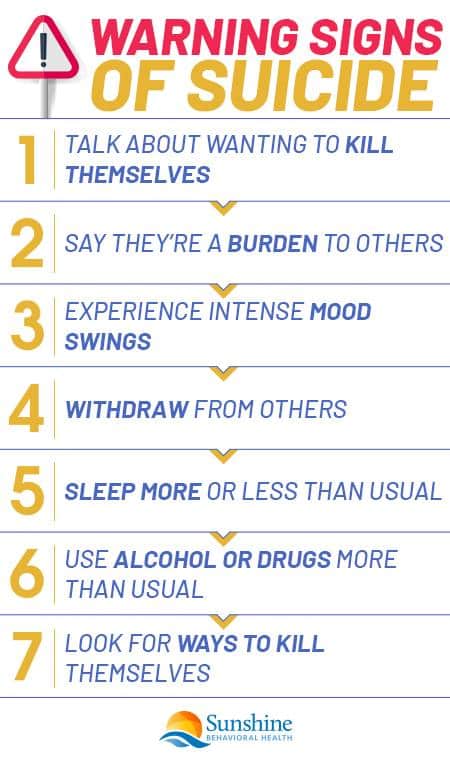 Talking about suicide could prevent it. Although people might be scared that talking about it will prompt people to kill themselves, talking won’t trigger suicides. Instead, people might be glad that others care about them and are willing to discuss matters with them.

Loved ones can open the conversation with statements such as, “I’ve noticed that you’ve been going through some changes and was wondering if you wanted to talk about them” and “I’ve been concerned about you lately.” Then, they can ask questions directly:

Such language doesn’t leave room for ambiguity and makes it more difficult to deny any problems.

Once people ask such questions, they should listen to the answers. Although the answers may be emotionally difficult, offering to listen without interrupting or judging can help people feel more comfortable to share potentially painful information.

When talking, people shouldn’t promise to keep things secret. They may need to reach out for further help. Instead, listeners should stay with the people sharing their stories and follow up afterward.

Listeners could remind people that even though they might not fully understand what’s happening, they support them and can help them find additional assistance.

Inpatient (residential) and outpatient programs can also help people with suicidal thoughts and behaviors, addictions, and other conditions.

If people or their loved ones are having suicidal thoughts, they can call 911 or contact: