While other drugs might receive more attention, cocaine is still available and is still deadly. Many people struggle with cocaine abuse and addiction and if they don’t find helpful resources or seek timely treatment, this powerful stimulant drug can cause many negative consequences, including death. 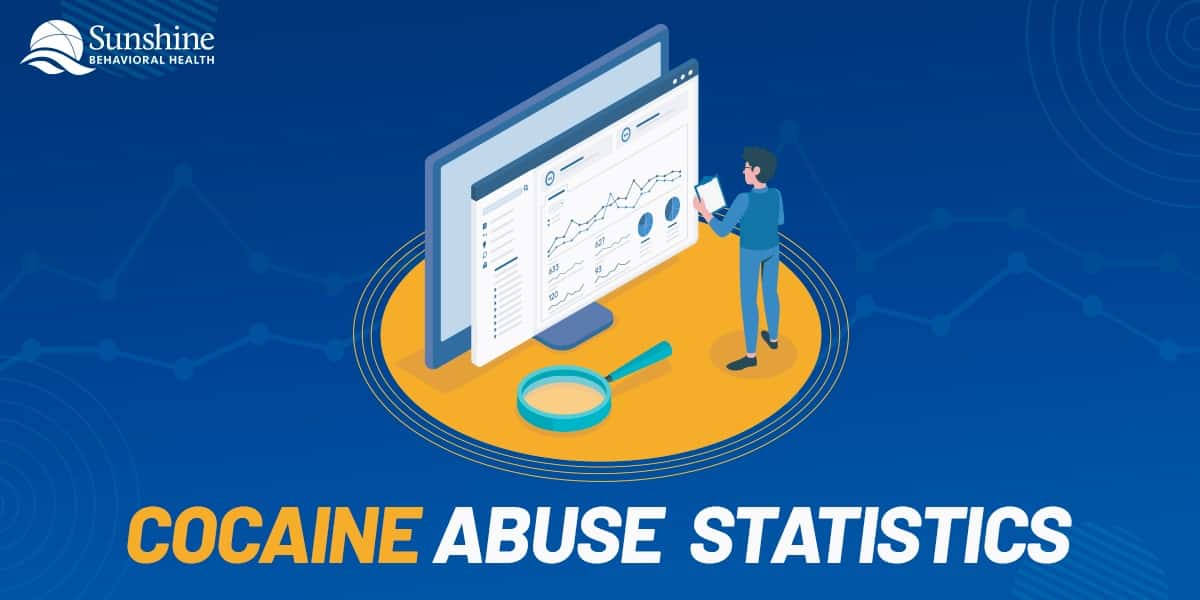 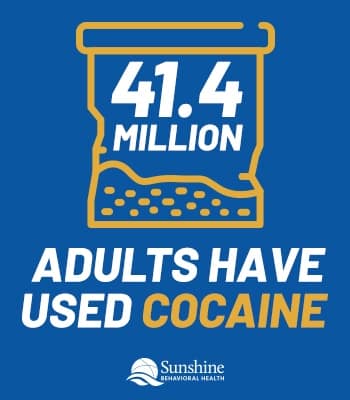 The National Survey on Drug Use and Health (NSDUH) is one of the major sources for detailed information about drug use in the United States.

According to the survey:

While more people over the age of 25 use cocaine, as a percent of population, younger adults aged 18-25 are more likely to use cocaine regularly, reported the NSDUH survey.

Cocaine Use Statistics by Age

Statistics About Cocaine in Seniors

A 2020 report prepared by the National Institute on Drug Abuse reported that senior citizens used cocaine together with other drugs. People over age 65 who used marijuana were eight times greater chance of using cocaine than those who did not use marijuana. 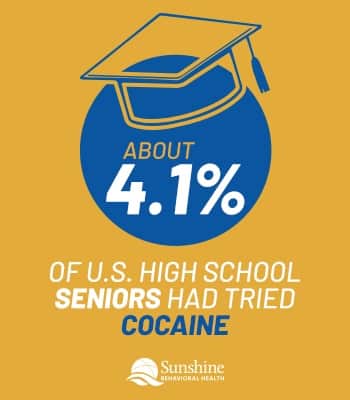 Statistics of Cocaine in Teens

How many teenagers use cocaine? According to the 2015 Monitoring the Future Study, about 4.1% of U.S. high school seniors had tried cocaine at least once in their life, and 2.9% had used it during the past year.

Researchers with the Monitoring the Future study have also analyzed drug use among eighth and 10th graders and found that 1.6% of teens at both grade levels had tried cocaine at some time in their life. Fewer than 1% of 12th graders had used cocaine during the past month.

Stats on crack cocaine among U.S. students indicate that fewer use that version of cocaine. According to statistics, 1% or fewer of eighth-grade, 10th-grade, and 12-grade students reported using crack cocaine in the last year.

Cocaine Use Stats by Gender

There are several surveys that track drug use in teens ages 12 to 17.

According to the National Institute on Drug Abuse (NIDA), there are about 750,000 babies born from cocaine-exposed pregnancies each year. Most older children who are treated for cocaine use or exposure are accidentally exposed, or they obtain the drug by living with adults who have drug problems.

Such exposure can cause consequences. A 2021 study published in the Journal of Pediatrics found that emergency room admissions for suspected stimulant overdoses, including cocaine, increased 3.3% for newborns through 10-year-olds between 2016 and 2019.

Unintentional exposure to cocaine is relatively rare, but for children it can be serious. Children exposed to cocaine may be at risk for life-threatening symptoms such as seizures and irregular heart rates. 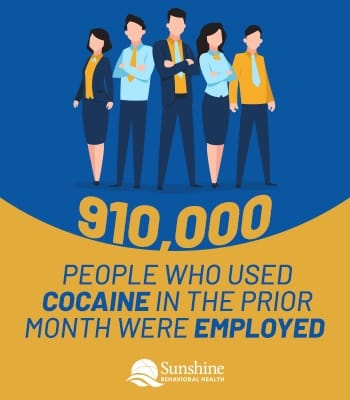 Another 412,000 people who used cocaine in 2019 belonged to the employment status category known as “other.” This category includes people who are self-employed, retired, on disability, or incarcerated.

All ethnicities use cocaine. The 2019 Survey on Drug Use and Health (NSDUH) survey stated that among people who had used cocaine at least once in the prior month, 879,000 were white and not Hispanic or Latino. Other ethnicities’ use of cocaine during the prior month in 2019 included:

Researchers have claimed that there’s “an inverse association between cocaine use and educational achievement.” That is, the more education people have, the less likely they are to use cocaine.

People who didn’t graduate from high school used cocaine more consistently during 1979 to 2002, according to the findings of the Survey on Drug Use and Health (NSDUH).

Driving Under the Influence Stats for Cocaine 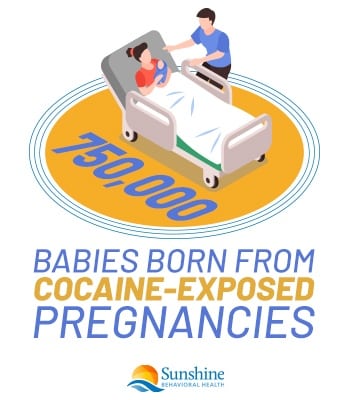 Cocaine usage varies by different U.S. states. Taking on average of the 2018 and 2019 National Surveys on Drug Use and Health, the U.S. states with the highest average percentage of cocaine use are located in the U.S. West Coast and East Coast and also include Hawaii.

Some Stats About Cocaine

Alcohol was the most common substance college students used while they were driving. Cocaine was the second most common intoxicating substance, according to the results of a 2011 study.

Oregon, Colorado, Arizona, and the states of New England had the highest levels of young adult cocaine misuse in 2014-2015.

Use of stimulant drugs such as cocaine was increasing among U.S. eighth graders in 2020, said the 2020 Monitoring the Future Study.

Surveys indicate that one million people, or 0.4 of the U.S. population 12 or older, had a cocaine use disorder. 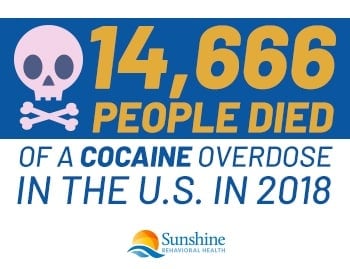 Using and misusing cocaine can cause overdoses and deaths. Data from the Centers for Disease Control (CDC) and Prevention reported on cocaine overdose deaths between 2009 and 2018:

Such statistics indicate the need for timely, effective treatment to treat cocaine abuse and addiction.

Statistics on Cocaine Treatment and Recovery

For people wondering how many people are addicted to cocaine, a total of 1.0 million U.S. residents had cocaine use disorders in 2019,  according to the National Survey on Drug Use and Health.

Although the U.S. Food and Drug Administration (FDA) has approved medications to help people recover from alcohol, tobacco, and opioid use disorders, there are no specific medications available currently for cocaine use disorders. But evidence-based therapeutic interventions in both residential and outpatient settings can help people understand and manage cocaine abuse and addiction. 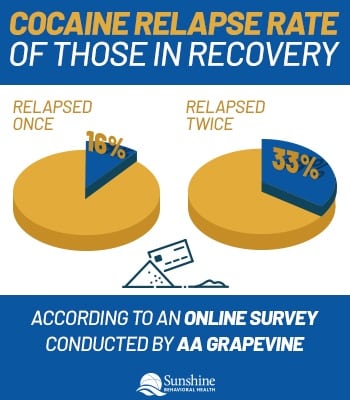 There are few statistics available on the rates of relapse for cocaine use disorders. In general, the National Institute on Drug Abuse (NIDA) has provided education about the role of relapse in recovery and treatment of substance use disorders.

YouTube videos, cable news, and opinion-based websites may not have the most up-to-date, reliable, or unbiased information. Government and nonprofit organizations work hard to understand and provide resources to treat substance use, including cocaine addiction and co-occurring mental disorders.

Part of the U.S. Department of Health and Human Services, the Substance Abuse and Mental Health Services Administration is commonly known as SAMHSA.

SAMHSA offers treatment locators for behavioral and substance use disorders at https://www.findtreatment.gov

The agency also publishes booklets and factsheets, including Tips for Teens About Cocaine.

Another government-affiliated agency that addresses substance abuse and addiction is the National Institute on Drug Abuse (NIDA).

NIDA publishes research reports on drugs and addiction. Its resources on cocaine include information about effective treatments.