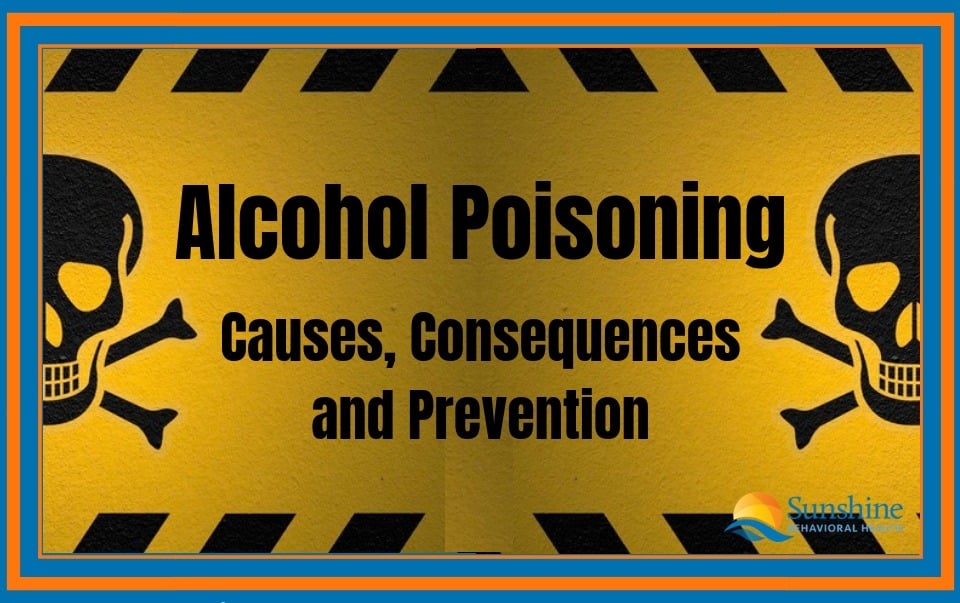 Alcohol poisoning is another term for an alcohol overdose, a serious medical crisis that can be lethal. What is the definition (“def“), well it a nutshell it occurs when the blood level of alcohol is too high to be properly processed by the body. This typically results from drinking heavily in a short amount of time (binge drinking). People who binge drink are especially vulnerable, as are people who have a high tolerance for alcohol. High tolerance for alcohol means that significant amounts of alcohol can be consumed without feeling the desired effects. Consequently, someone can overdose as they seek intoxication but do not feel intoxicated despite drinking large amounts of alcohol.

The CDC (Centers for Disease Control and Prevention) reports that an average of 6 people per day dies from alcohol poisoning in the U.S. They also report that alcohol-related deaths have exceeded opioids deaths in the U.S. even though there is an epidemic of opioid-related fatalities in the country. Their findings indicate alcohol abuse has been a public health problem of its own epidemic proportions for some years and that the rates of overall related problems and alcohol poisoning are continuing to increase.

What Exactly is Binge Drinking?

At the center of the alcohol poisoning problem, and of major public health concern, is binge drinking. Drinking heavily in episodes (binges) is the most common pattern of drinking in the U.S., and anyone who consumes the ‘right’ amount of alcohol within a short period of time is at risk for an alcohol overdose.

And, there are other factors that determine the risk of alcohol poisoning during a binge. These are:

There are other costs of binge drinking that are broader in reach. For example, statistics show in 2010, binge drinking was estimated to have cost the U.S. approximately $190 billion dollars in lost work productivity, health care, and crime-related expenses.

The Symptoms of Alcohol Poisoning

An alcohol overdose is dangerous because it causes vital bodily functions to slow or stop. This occurs because alcohol is a brain and nervous system depressant which sedates or ‘depresses’ functions necessary for life. Breathing and the gag reflex, for example, can be slowed or stopped in an alcohol overdose. Of course, breathing is essential, as is breathing well enough to fuel the body. Slowed breathing, or sporadic breathing can reduce oxygen levels severely, causing brain and organ damage due to hypoxia. Stopped breathing is of course life-threatening. And, a slowed or stopped gag reflex can cause choking. Since symptoms of an alcohol overdose include vomiting, there is a risk of aspiration–choking on vomit or inhaling it into the lungs. Even when an overdose is survived, there may be irreversible damage due to hypoxia.

Other symptoms of alcohol poisoning include:

An Alcohol Overdose Can Continue After ‘Passing Out’

A popular myth is that when someone loses consciousness or ‘passes out’ after drinking is ‘sleeping it off’. However, an alcohol overdose can continue during unconsciousness. The stomach and intestines continue to release alcohol into the system sometimes after drinking has stopped. Consequently, someone who has become unconscious can still absorb more alcohol, increasing the risk of a fatal overdose.

What to Do if You Suspect Someone Has Overdosed on Alcohol

Since alcohol poisoning can be life-threatening, it is always wise to err on the side of caution. If you suspect someone has overdosed on alcohol, you should seek immediate emergency help, and:

The primary prevention recommendation is to avoid binge drinking. Alcoholic drinks should never be consumed rapidly. Other preventive measures are:

If You or a Loved Abuse Alcohol

Alcohol abuse is a significant public health problem and if you or a loved one drink heavily, you are certainly not alone. Many suffer from alcohol-related conditions that can be successfully treated. The often-severe consequences of Alcohol Use Disorders can be successfully resolved and sustained recovery is possible. Countless people have overcome alcohol problems and you or your loved one can, too.

We can help you find the right rehab program if it’s time to tackle the problem. We give free consultations in which we clarify treatment needs and insurance coverage to make the right recommendations for you or your loved one. Effective help is available, and recovery is more than possible with the right help. Questions or concerns?  If so, reach out to Sunshine Behavioral Health today.