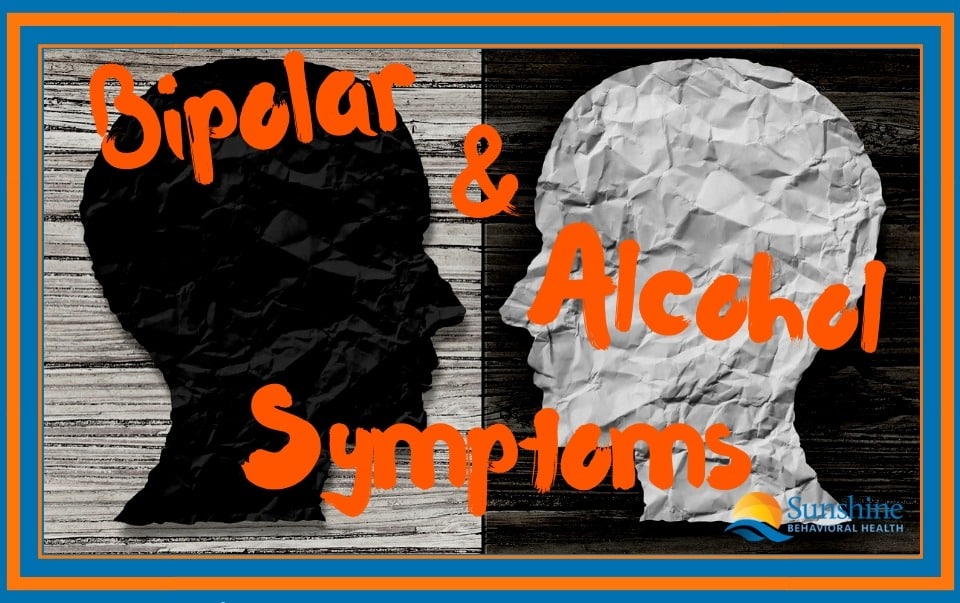 Bipolar disorder and alcoholism are two serious conditions that can have a significant impact on mood, behavior, and overall health. When left untreated and uncontrolled, both can also carry a risk of accidental injury, relationship difficulties, suicide, or accidental death.

While many might not see the connection between these two conditions, they do, in fact, commonly occur together. Recent statistics show that approximately 46% of individuals with bipolar disorder also abuse alcohol. Alcohol is also the most commonly misused or abused substance among those with symptoms of bipolar.

Symptoms of bipolar disorder fall along a mood spectrum, with mania at the high end, followed by hypomania, and depression. Some individuals might also experience mixed episodes where both manic and depressive symptoms are felt at the same time.

When people think of bipolar disorder, they tend to picture the mania aspect of the condition. When those with bipolar are at this end of the mood spectrum, they may appear to have boundless energy and improved moods compared to when they are at the depressive end of the spectrum. The symptoms of mania can include:

With hypomania, individuals will feel the symptoms of mania but at a more muted level. They may be happier, more social, more energetic, or more irritable than usual. Typically, individuals in this stage will be more productive but might also engage in more risk-taking behaviors.

At the opposite end of the mood, spectrum is depression. This stage might last for days or weeks and involve feelings of worthlessness and despair. Individuals who are at the depressive end of the mood spectrum might exhibit the following symptoms:

If one is experiencing mixed episodes, symptoms of mania or hypomania might exist alongside symptoms of depression. For some people, this might look like feeling suicidal and crying a lot while also having racing thoughts and being unable to sleep. Some people might feel like they are having extreme mood swings, moving from depression to mania one or more times a day.

Psychologists use multiple classifications when diagnosing bipolar disorder. Individuals are diagnosed with bipolar 1 if they have had at least one manic episode either preceded by or followed by a depressive episode. Either episode may have required hospitalization due to severity.

Those with hypomanic episodes are diagnosed with bipolar 2 as long as one or more of the hypomanic episodes lasted a minimum of four days. At least one depressive episode must have lasted two weeks or more to meet criteria for this diagnosis.

The symptoms of bipolar disorder can be intense, and for some people they might also be difficult to deal with. While many find symptom relief with psychiatric care, others may turn to alcohol to self-medicate and cope with the symptoms. For example, people may drink to temporarily boost their mood while in a depressive episode or they might feel uncomfortable with the agitation that comes with a manic episode and drink some liquor to feel calmer.

Effects of Alcohol on Bipolar Disorder

Bipolar and alcohol symptoms are often difficult to differentiate. Alcohol can increase the intensity of symptoms, leading to volatile mood swings, extreme mania, or severe depression. Manic episodes can also lead to binge drinking. If one drinks excessively, bipolar and alcohol blackouts can lead to injury or death due to falls or other accidents, a risk that is already elevated in people with bipolar.

Interactions between Alcohol and Medication

Bipolar and alcohol abuse can have significant health consequences as well. Many people with bipolar disorder are treated with mood stabilizers, such as Lamictal, lithium, or Depakote. They might also be prescribed benzodiazepines, such as Xanax or Klonopin, antidepressants like Wellbutrin, and antipsychotics like Abilify or Risperdal to help manage symptoms.

Unfortunately, these medications can interact with alcohol, leading to extreme drowsiness, dizziness, respiratory depression, heart rate changes, and liver damage. In some cases, this damage has been permanent and life-threatening.

When substance abuse occurs with another mental illness, it is often referred to as dual diagnosis or coexisting disorders. In these situations, you don’t just need alcohol rehab. Rather, bipolar and alcohol treatment centers would be a far better fit because facilities with experience treating dual diagnoses can address both the bipolar disorder and alcoholism.

Symptoms of bipolar and alcohol withdrawal can be difficult to cope with but a treatment facility experienced in dual diagnosis can help make the process more comfortable and safer. Following detox, you will likely undergo individual and group therapy to address underlying trauma, anxiety, and depression, in addition to helping you learn to cope with your bipolar disorder and difficult or overwhelming life situations. You will also likely receive medication management services to ensure that your bipolar symptoms are appropriately controlled.

Bipolar disorder and alcohol abuse are two very serious conditions that can profoundly impact your life. If you or someone you know has bipolar disorder and is abusing alcohol, it is important to get treatment. Bipolar and alcohol recovery is possible and with appropriate treatment, you can live a healthy and fulfilling life. We are ready to speak with you and help you take the first step in your journey towards a clean and sober life.