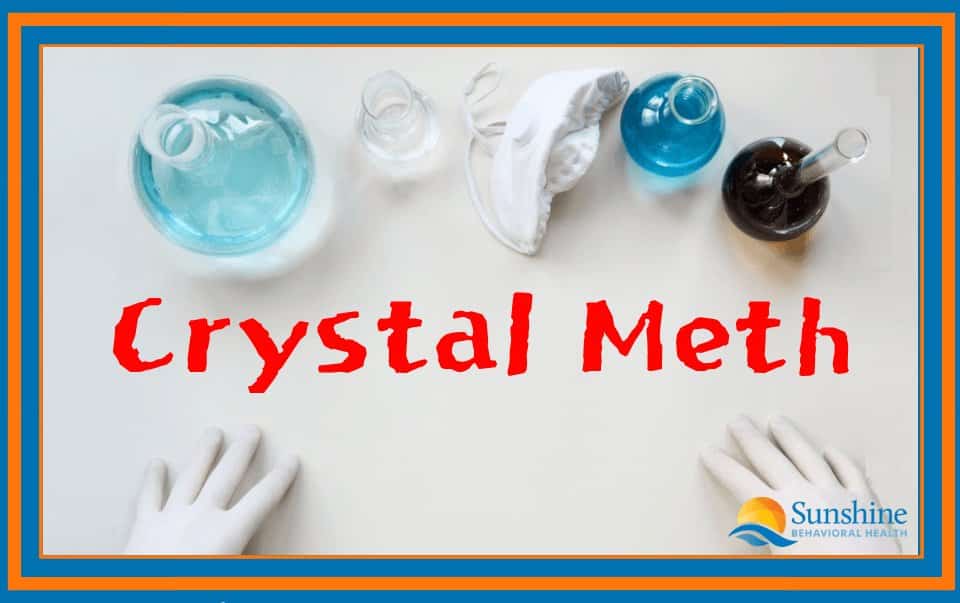 Crystal meth, also referred to as methamphetamine, is an extremely addictive substance that may produce long-lasting effects on an individual’s body. The illicit (illegal) drug crystal meth is available in rock-like crystals that usually have a semitransparent white or sometimes blue color.

With the introduction of efficient prescription stimulants, methamphetamine currently has limited therapeutic use. Doctors rarely prescribe it to treat attention deficit hyperactivity disorder (ADHD) or severe obesity. In 2011, the Drug Enforcement Administration (DEA) reported that almost 12 million Americans said they had used crystal meth for nonmedical reasons at some point in their lives.

To use crystal meth, people typically heat the substance before smoking it in a glass pipe. Sometimes, they crush it and then inject or snort it.  Smoking crystal meth allows it to enter the bloodstream quickly. Using it in this manner may lead to addiction.  Using methamphetamine presents both short-term and long-term effects.

How Does Crystal Meth Damage the Body?

Many crystal meth users do not understand how the drug attacks the body. Similar to other drugs related to amphetamines and other stimulant drugs, crystal meth enters the brain and induces euphoria by exciting brain neurotransmitters that are responsible for pleasure and rewards. When people use crystal meth, the euphoria is so intense that it compels them to use it again.

After several doses, a person may be addicted to the substance and require crystal meth addiction treatment.  Besides euphoria, using meth for an extended period may cause brain damage. The severity of damage increases with increased dosages of crystal meth and other drugs. Drug users want to use more of the drugs to create the same effects they felt at lower dosages.  While such drug-related damage could be reversible, at other times, it is permanent.

Effects of Crystal Meth Use

In the short term, using crystal meth may produce euphoria, increased alertness, and higher energy levels. These effects may last up to twelve hours.  A user may also experience an intense rush and extreme motivation to accomplish goals or tasks.  An individual may have boosted confidence, increased intellect, and an enhanced ability to solve problems, at least temporarily.

People who abuse crystal meth sometimes do so because they want to experience its more desirable effects, but these effects quickly fade and they feel the adverse effects of the drug.  For instance, using crystal meth even in the short-term may produce unpredictable and violent behaviors, particularly when taken in large doses.

Tweaking as a Result of Crystal Meth Use

When methamphetamine is not producing the euphoria and high individuals desire, they may begin tweaking.  While tweaking, users experience cravings and intense feelings of despair. During this time, they may also experience psychotic symptoms.

Users may struggle with delusions and other distorted perceptions of reality. If individuals develop these unsettling effects, seeking treatment is a good idea. Depending on their needs, clients may enroll in inpatient mental treatment facilities, rehab centers, detoxification facilities, or a combination of these options,

Tweaking may produce long-term insomnia and a loss of appetite, causing individuals to sleep more in the daytime. Afterward, they may be thirsty, hungry, and fatigued.  These effects may last for up to two weeks. Sometimes, the effects may occur alongside the onset of clinical depression or other conditions.

The Long-Term Effects of Crystal Meth Use

Since crystal meth damages the blood vessels and tissues and hampers the ability of the body to heal, it may lead to the appearance of premature aging. Users may develop acne. Their skin may look dull and lose its elasticity. Abusing meth may cause their teeth to decay and crack, a condition referred to as meth mouth.

Sudden death is one of the most dangerous long-term side effects of using crystal meth. This may occur due to a stroke or cardiac arrest.

Pregnant women who abuse substance risk harming their babies and themselves. The drug may cause premature birth or lead to birth defects such as cleft palate and heart anomalies.  Babies born to meth users tend to be small because of a lack of prenatal care and nutrition during pregnancy. Crystal meth is often present within the breast milk of mothers who use the substance, which may place breastfeeding babies at risk.

Before the body and mind surrender to the long-term effects of crystal meth, it is important to seek help.  Withdrawal from meth may cause extremely uncomfortable symptoms. The symptoms may lead to relapse if people use drugs again to try to alleviate them.

A medically supervised detoxification program strives to properly manage such symptoms to prevent relapse. People may need to enroll in inpatient or residential rehab programs to find an effective treatment for a crystal meth addiction problem.