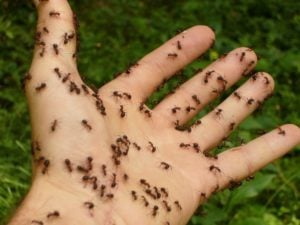 Drug-Induced Formication: How it Happens and How to Make it Stop

Formication is the sensation as if something is crawling under your skin. Believe it or not, it is a common phenomenon for many people who use stimulant drugs. How does it happen? Is there a way to prevent it? This article highlights what drug-induced formication is and how to make it stop.

Illicit drugs can alter many portions of the brain, including those responsible for perceiving sensation. Aside from visual and auditory hallucinations, people can easily have a different experience in their sense of touch after the use of drugs.

The first people who reported chronic formication were those who used cocaine back in 1889. After these hallucinations were reported increasingly, the term became more known as “coke bugs,” “amphetamites,” or “meth mites,” depending on the drug that is being used. Those with this problem also often experience scabs and sores on the skin, known as dermatosis, resulting from these sensory hallucinations.

Those who think that there may be bugs or worms crawling on their skin would tend to scratch, pick, or injure the part where they feel the sensation to bring a form of relief. Lesions are commonly found on easy-to-reach areas such as the arms, legs, face, or other body parts that can be touched by the hand. The problem may worsen at night and can impact a person’s quality of life if left untreated.

Formication is a sub-category of paresthesia, or sensations in the skin which may include burning, itching, tingling, numbness, warmth, or cold.

Drug-induced formication happens when a person uses various drugs with stimulant and hallucinogenic properties. Aside from visual and auditory hallucinations, people who use drugs may also experience ‘false’ tactile sensations. This is caused by the altered sensory functions of the brain during a drug high.

Some sensations may be distorted or emphasized when the brain enters an altered state. Visual stimuli may appear colorful or warped. The person may also start to hear sounds and whispers that aren’t physically existent. They may also feel sensations in their skin or have exaggerated sensations of itch related to drug use.

Drug-induced formication can also be a withdrawal symptom of taking various drugs. This can be mild to severe depending on the body’s reaction to the withdrawal.

What are the Common Drugs Associated with Drug-Induced Formication?

These drugs either have stimulatory or hallucinogenic properties that cause false sensations on the skin. This can sometimes happen during alcohol addiction but is not as common as the list above.

Formication has different physical and psychological symptoms. Here are some of the signs you can look for if you or a loved one is having drug-induced formication:

A person may repeatedly complain of bugs or worms crawling under their skin. You may notice them try to scratch, pinch, or rub their skin to get rid of the sensation. In other instances, you may also notice them exhibit feelings of fear as if they actually saw the bugs that appear to be crawling on their body.

Drug-induced formication is most common at night when the body is idle. It can also worsen when someone is going through a withdrawal phase. The result may be lesions such as scabs, scars, open wounds, or bumpy areas in the skin where old wounds were picked.

One’s feeling of bugs crawling under the skin may be enough to trigger anxiety and paranoia. Those who experience drug-induced formication may be more prone to worrying and having delusions about their bodies being “attacked.”

It is important to consult a doctor if you notice symptoms of drug-induced formication. The best way to treat this condition is by seeking medical help first before stopping to use any form of recreational drug. There are possible harmful consequences in doing self-withdrawal if not done correctly.

Your doctor may prescribe topical medications to help relieve the skin and reduce the complications of lesions. This should be applied regularly on the parts affected, usually once during the day and at night.

Some medications can be prescribed to reduce withdrawal symptoms of previously used drugs. For example, methadone can be used to relieve drug dependence on opioids. As some opioids may cause drug-induced formication, it is important to minimize and eventually eliminate the use of drugs that cause the condition.

Drug-induced formication sometimes occurs in idle moments such as during the night or when the person is resting. Rehabilitation treatment presents holistic programs that patients can enter so that they can overcome drug dependence and reduce the struggles during withdrawal.

During the period of medical and rehabilitation treatment, patients may still encounter “skin-crawling” sensations from time to time. It is best to wear protective clothing to prevent the worsening of old lesions and the formation of new ones. For example, one can wear long-sleeved shirts, pants, gloves, or socks to prevent scratching the skin. Protective clothing can serve as a barrier until a person fully recovers from drug-induced formication.

To help decrease withdrawal symptoms from recreational drugs, it is ideal to have a nutritious diet and an active physical lifestyle. These habits can help flush out the substances and other toxins in the body, making it easier to recover from drug-induced formication.

Keep the Bugs away: Get Help Today

Are you looking for treatment in drug-induced formication? Do not hesitate to seek help today and get comprehensive treatment for drug use and its complications.