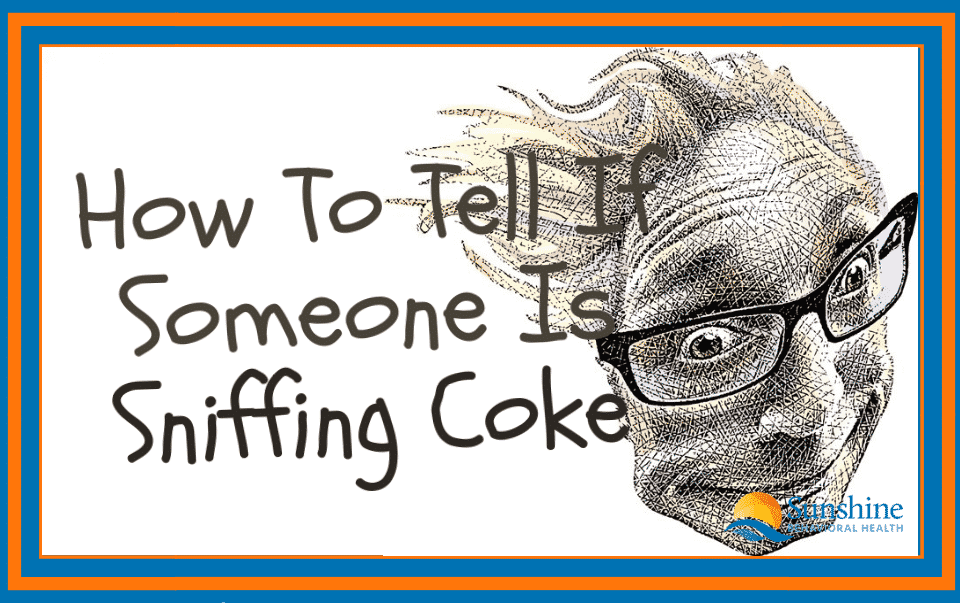 Cocaine is often referred to as crack cocaine, coke, or blow. It is a powerfully addictive stimulant which is abused by many people for its euphoric effects. It is prevalent for it to be used in a recreational environment. The important thing to remember is that this drug can be dangerous, harmful, and may even be fatal. This is especially true when used with other substances.   So how do you know if someone is sniffing coke?

Cocaine is a potent stimulant. It is commonly abused because of its high potency and effects. This drug is native to South America. It is extracted out of cocoa leaves.  Cocaine is often found being used for recreational purposes by abusers and addicts. There are many drug slang terms for cocaine including the following:

Cocaine is mostly snorted, but it can be injected, rubbed into a person’s gums, and smoked, as well. Typically, it is a fine, white powder which is combined with cornstarch, flour, or some other drug to increase its potency. Crack cocaine, is mostly found in a hard rock form, it is much more concentrated than cocaine.  Crack cocaine is made by dissolving the powder in hot water with some baking soda, boiling the ingredients, and filtering them. This type of cocaine is smoked. You can hear a crackling noise as the rock is heated.

Did you know the U.S. Food and Drug Administration (FDA) puts drugs into classifications based on their accepted medical use, harm level, and abuse risk? Drug classifications range. Schedule I is for controlled substances. These are drugs not being medically used in the U.S and carry a high potential for abuse. They go to Schedule V drugs. These drugs are the controlled substances that have no potential for abuse. Cocaine goes in under the category of Schedule II controlled substances. This means it has a high risk factor for abuse. It also means people using it have an extremely high potential of becoming physically and psychologically dependent upon it. If you would like more information on how to get treatment for cocaine addiction, it would be a good idea to contact a cocaine addiction rehab as soon as you can.

Know the Signs of Cocaine Abuse

In most cases, drug use can be hard to notice. However, cocaine users show some pretty obvious behaviors which indicate their addiction to it. Since this type of drug is a stimulant, cocaine addicts use it to become very happy and energetic. They often are hyperactive, move around a lot, and talk fast. However, once the cocaine wears off their happy mood disappears and the person begins feeling depressed or even angry. Many addicts get easily irritated, anxious, or even paranoid until they get their next fix.

People who are frequent cocaine users often show signs of allergy-like symptoms. Their sinuses become affected every time they sniff or snort the drug. Cocaine addicts will sometimes have bloodshot eyes and runny noses. They often carry eye drops. If you see your friend or family member having consistent nosebleeds and dilated pupils, these symptoms could also be signs that the person is sniffing cocaine on a regular basis.

It is common for a drug user to carry paraphernalia so they are prepared to get their next fix anytime and anywhere. Cocaine addicts might have cylindrically shaped devices they use for sniffing and snorting this dangerous drug. They may even have plastic straws or rolled up dollar bills. If you notice a white substance on the inside of someone’s nose, it might also be an indicator they are snorting or sniffing cocaine. This would be a good time to contact a cocaine addiction rehab center.

If a person has been using cocaine for a long period of time, you may see behavioral indicators which show they have an addiction to the drug. Some of them include:

If you, one of your loved ones, or a friend is suffering from a cocaine addiction, now is the time to seek help. The best way to go about asking for help is by contacting a cocaine addiction rehab treatment program, speaking with a professional therapist, or talking to a doctor. Cocaine addiction can be hard to overcome. However, it can be accomplished, so reach out for help today. Do you or anyone you know have problems with Coke?  If so, do not hesitate to reach out to Sunshine Behavioral Health today.