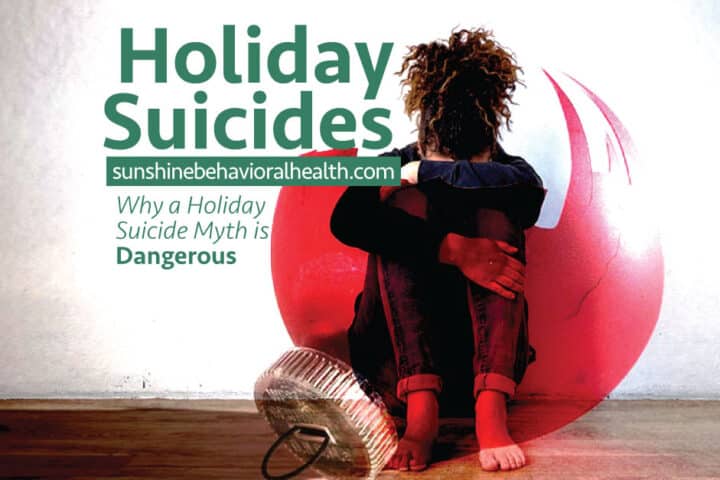 It’s a Myth That Holidays Mean More Suicides, but Knowing the Signs Is Always Wise

The holidays are a time for traditions such as cookies, carols, and gifts galore.

There’s also that perennial bit of tarnish to the tinsel: that suicides go up during this time of year.

While we leave many of our beliefs behind as we age, we sometimes tumble right into this persistent falsehood. It turns out that suicides typically occur most often in the spring and fall, and are actually at the lowest rate in December.

Suicide prevention is crucial no matter what time of year it may be — it’s the tenth leading cause of death for Americans, after all.

In 2018, more than 48,000 took their own lives in the United States. Thousands more visited emergency rooms to have their self-inflicted injuries patched up.

No one’s exactly clear why suicides and holidays get lumped together.

Some suspect it has to do with Frank Capra’s It’s a Wonderful Life. In the 1946 film George Bailey, played by Jimmy Stewart, contemplates suicide. It all ends well for Bailey, thanks to the help of an angel and some generous townsfolk, but those moments of despair make a lasting impression.

Others think people may ponder killing themselves during the winter months because it’s dark and dreary outside in many parts of the world. That, in a strange way, can be a lifesaver because many people simply may not have the energy to act. They feel sleepy, sad, and blah, yes, but to actually do the deed, not so much.

Also, the holidays are often busy and bustling with gatherings and things to do. These activities might provide distractions, possibly life-saving ones.

What will happen during this season with COVID-19 in full swing remains to be seen, but the National Suicide Prevention Lifeline offers some coping tips. It’s worth mentioning that the data saying suicide rates tend to drop in December doesn’t cover everyone and every circumstance.

People may plot taking their own lives due to isolation, loss of work, or because they’ve resorted to binge-drinking or other self-medicating behaviors to drown sorrows.

It’s not always external factors such as the holidays, either. Sometimes suicides are tied to mental illnesses such as depression or anxiety.

The best thing is to know the signs (in yourself or among friends and family), and to reach out for help as needed.

Risk factors for suicide include:

A strong personal, medical, and mental health support network can eliminate or reduce many of the risks.

If anyone you know is struggling, their behaviors have changed, or they talk about taking their lives or say things like the world would be better off without them — that includes you thinking or saying such things — please don’t keep silent about it.

Speak to someone you trust or call the National Suicide Prevention Lifeline at 800-273-8255 (TALK).

healthline.com – Why the “Holiday Suicide” Myth Is Dangerous