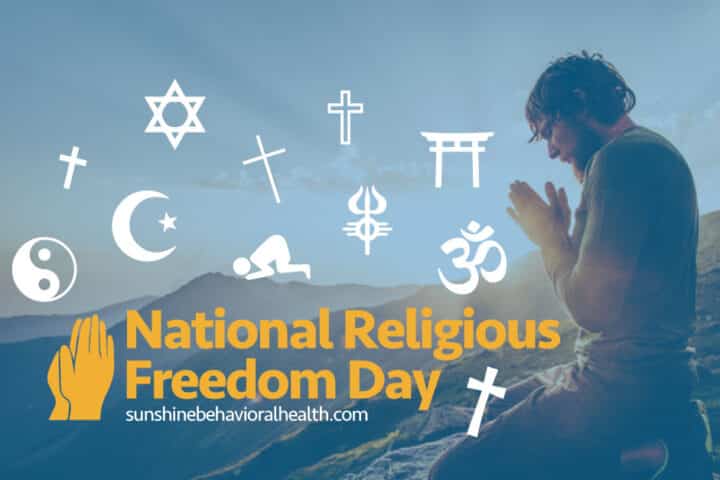 In the song “Imagine,” John Lennon asked us to imagine no possessions, no countries, and no religion too.

The lyric “Imagine …. no religion, too” drew a lot of criticism. The song is mostly seen as an anthem for peace, but at the time the World Church approached Lennon and asked him to change “no religion” to “one religion.” The former Beatle refused.

“It would defeat the whole purpose of the song,” he told Playboy magazine in 1980. “If you can imagine a world at peace, with no denominations of religion, without this my God is bigger than your God thing, then it can be true.”

That document was the basis for the establishment clause of the First Amendment of the U.S. Constitution: “Congress shall make no law respecting an establishment of religion, or prohibiting the free exercise thereof … .”

The statute allows people to practice or change their faith without being harassed, imprisoned, or killed. That also includes the right to not practice a religion.

Even though a person might think the closer to the present we are, the more enlightened and tolerant the world becomes, the Pew Research Center has found that’s not always the case. Restrictions of religious freedom remain in many parts of the world, right along with leaders showing preference toward certain faiths.

Violence connected to religion — both in the name of one faith or against others — is on the rise, too.

Practicing your own faith — if you have one — is a fine way to observe Religious Freedom Day, but so is taking time to learn about other faiths, or taking part in an interfaith celebration.

Religion is a source of comfort for many people. Globally, more than eight out of every 10 people identify with some religious group. Broken down by percentages:

Of course, many of those groups have smaller denominations and spiritual groups within. It’s not even entirely clear how many faiths there are, but some estimates place the number around 4,200.

People turn to spirituality for many reasons. For some, it’s a constant, a vital part of their being.

For others it’s something they turn to (sometimes temporarily; sometimes permanently) after a traumatic or confusing event.

Others find spirituality helps them through health struggles, be they physical or mental. It can be a path away from self-harm wrought by substance use — and is even a part of many 12-step programs (the belief that a power greater than oneself and taking personal inventory can steer them the right way).

Studies have found religious faith can be good for one’s mental health, including anxiety and depression. It seems to have the best effect when it’s more organic, where someone practices a faith because they truly believe in the creed, as opposed to it being forced upon them.

For those reasons, National Religious Freedom day is one worth considering, both as a way to learn about and better accept other belief systems.

smoothradio.com – The Story of… “Imagine” by John Lennon

constitution.congress.gov – Constitution of the United States

pewforum.org – A Closer Look at How Religious Restrictions Have Risen Around the World

journals.sagepub.com – Research on Religion, Spirituality, and Mental Health: A Review

vichealth.vic.gov.au – How Does Freedom of Religion and Belief Affect Health and Well-Being?