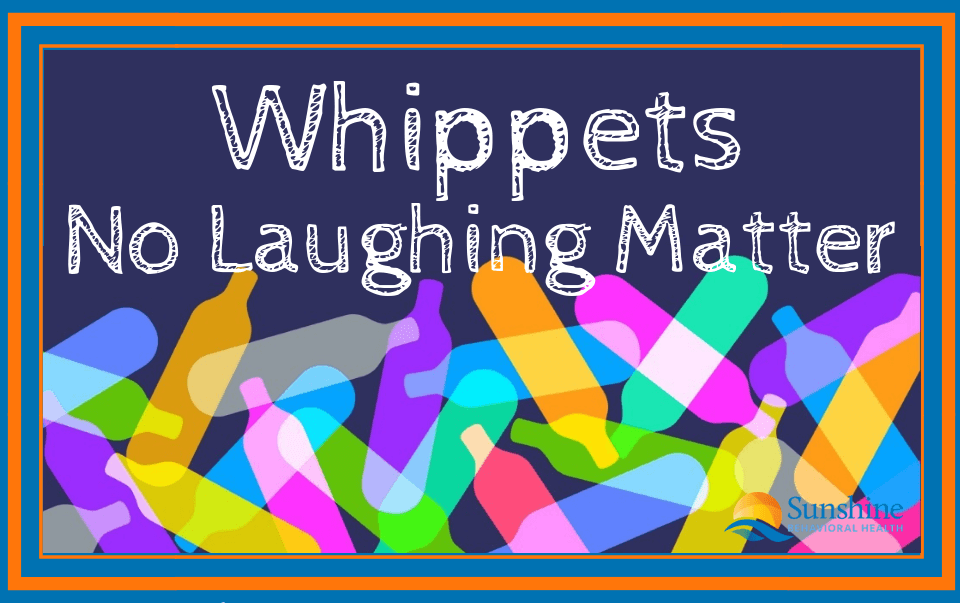 Whippets have quickly become a popular recreational drug, especially for teens and young adults. They are easily obtained and inexpensive, making them a drug of choice for young people who want a quick high. They are even found at many concerts or clubs, possibly giving users the impression that they are legal and harmless. However, using whippets can have catastrophic consequences, especially in youth.  So let us learn about Whippets abuse.

Nitrous oxide is more commonly referred to as laughing gas and it is used by many dentists to relieve pain and to relax an anxious patient. Whip-Its are a brand name of small canisters that can be purchased online and over-the-counter in many stores.

If Whip-Its are for filling whipped cream canisters, you might be wondering what is the drug called whippets. Some people choose to misuse the nitrous oxide canisters and inhale the gas. Therefore, when used to get high, whippets are classified as inhalants, just like glue, paint, markers, or other substances that are snorted, bagged, sniffed, or huffed for the purposes of achieving a high. The gas inhaled with whippets is colorless and tasteless, with a mild sweet odor.

What are the Effects of Whippets?

When used as a dental anesthetic, nitrous oxide is generally considered to be safe. At a medical dose, and when administered by a train professional, it offers pain relief and can cause feelings of floating or being dizzy.

If nitrous oxide is safe for medical use, you might be asking yourself “are whippets bad for you?” When used as a recreational drug, whippets can be far more potent and dangerous than the laughing gas you are administered at a dentist’s office. Whippets can deprive the brain of oxygen, giving you a head rush, in addition to heavy tingling limbs and an increased heart rate. The drug can also result in a state of euphoria and extreme giddiness.

Some people who use whippets experience hallucinations, as well as a loss of coordination and awareness. This can result in falls, including head injuries. Whippets can also lead to disassociation – the feeling of being disconnected from a situation or even your own body. The high takes place within seconds and lasts one to two minutes.

Do whippets give you brain damage? In some cases, yes. Some people have experienced brain damage after using large amounts of nitrous oxide over a long period of time, such as self-medication through a mask or using a bag. This brain damage can also lead to death within only a few minutes.

People who use whippets frequently can also experience vitamin B12 deficiencies because nitrous oxide inactivates the body’s B12. When this happens, users might experience nerve and brain damage, including arm and leg weakness, as well as depression, fatigue, and impaired memory. In some cases, the damage is irreversible.

Sudden Sniffing Death Syndrome is a condition associated with inhalant abuse. It has a rapid onset of only a few minutes and occurs when the body is deprived of oxygen due to inhalant use. In people who experience sudden sniffing death, the heart simply stops and first responders are rarely able to restart the heart, with death resulting almost immediately upon the heart-stopping. It is important to know that SSDS can even occur the very first-time whippets or other inhalants are used.

When used as a dental anesthetic or to fill reusable whipped cream canisters, purchasing nitrous oxide in canister form is not illegal. However, in many states, it is illegal to purchase whippets if your intended use is as a recreational drug.

While illegal to purchase for the purposes of recreational drug use, whippets are easy to obtain, sometimes even openly being sold at dance clubs and concerts. They are often marketed to teens or college students. However, in some states, the law prohibits selling, transferring, or offering whippets to minors. Additionally, in many states, inhaling nitrous oxide for the purposes of getting high or giving another person whippets as a recreational drug are considered misdemeanors. This means you might be fined if convicted of whippets use. Possessing large quantities of whippets is a third-degree felony in some states. If you drive while under the influence of whippets, you can also be charged with a DUI.

The high from whippets lasts only a few minutes so some people take multiple hits throughout the day, often to self-medicate for anxiety. Whippet addiction is more likely in users with anxiety or depression that use the drug as a way to relieve anxiety symptoms compared to those who use whippets only occasionally.

Nitrous oxide addiction is more common in dentists and hygienists who are around the gas daily.

Getting Help for Whippets Abuse

Currently, there is no specific whippets drug test, nor are inhalants typically tested for in standard drug tests. However, the effects of inhalant abuse can certainly impact your life and your performance at school and work. The serious impacts whippets can have on your brain, nerves, and heart, along with the risks for falls, head injuries, or car accidents, make it important to seek appropriate inhalant abuse treatment.

Whippets abuse treatment will likely involve addressing any anxiety or depression that might have caused you to self-medicate. In addition, you might receive individual and group therapy to help you learn healthier and safer coping skills to deal with stressful or overwhelming situations. You also will be given the tools necessary to develop healthy recreational behaviors to avoid turning to drug use when with friends, at parties, or at concerts.

While whippets are often used for a quick high, the long-term effects on your body are not worth the risk. It is important to seek help if you or someone you know is abusing whippets or other inhalants.

Questions or concerns about Whippets?  If so, make sure to reach out today to Sunshine Behavioral Health.