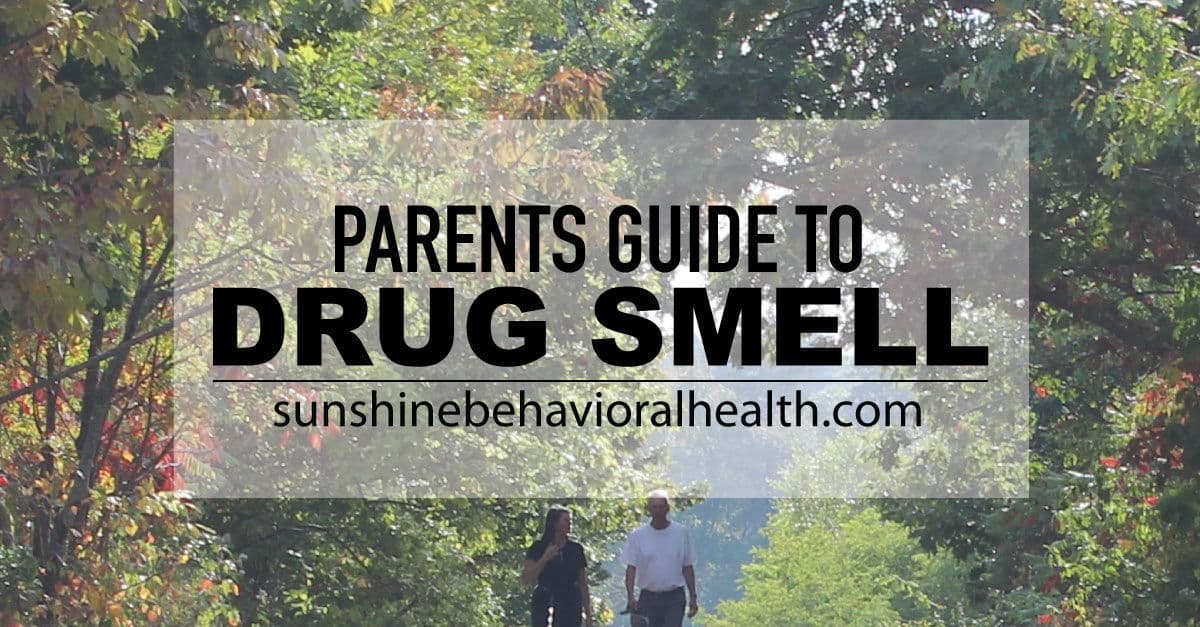 The Parents' Guide to Drug Smells: Identify Specific Drugs by Their Smells

The Parents' Guide to Drug Smells: Identify Specific Drugs by Their Smells

Being a parent is hard, especially when your kids reach their teenage years and begin to try new things to establish their independence. They revolt, they challenge your authority, and they may even begin experimenting with drugs.

How will you know if these signs of rebellion are just growing pains or indicators of substance abuse? There are many warning signs, such as behavioral changes and lack of motivation, but there are also telltale signs such as smells.

When your child comes home from school, a smell that seems slightly “off” could point to big problems, such as substance abuse. This is why we’ve compiled The Parents’ Guide to Drug Smells that’s featured below, so you can address a substance problem with your children before it becomes a bigger issue.

Many marijuana users will cover up the smell of the drug with incense, air fresheners, or potent body spray deodorants. So even if your child doesn’t smell like skunk, strong cover-up odors may also be cause for concern.

When smoked, methamphetamine gives off the smell of burnt plastic and cleaning supplies such as bleach, ammonia, or vinegar.

While the smell is fairly potent and can sometimes be detected on clothing, it’s not as strong as marijuana.

You may also be able to spot warning signs of meth use the day after users smoke. Meth users’ sweat may smell like chemicals the day after heavy use, which can further help you identify the problem.

When smoked, crack cocaine smells very much like a combination of burnt plastic and chemicals, and if you’ve been to a nail salon, you may have smelled something similar.

It’s rather difficult to distinguish between the scent of smoked crack and smoked methamphetamine. Rather, it’s better to remember that the smell of burnt plastic and chemicals, in general, should be a red flag.

Inhalants are solvents often used in industrial or cleaning supplies that give off a very strong chemical smell (think similar to gasoline), and the smell may stick to your child’s clothing and skin long after the substance is inhaled.

When smoked, heroin smells like vinegar, similar to methamphetamine. However, smoked heroin often gives off very little smell afterward, which makes it very difficult for parents to identify this as a potential problem. Paraphernalia and behavioral changes associated with heroin use are far easier to identify than smells.

When they’re smoked, pharmaceutical pain pills such as OxyContin and Percocet give off a rather sweet smell that is often described as the smell of burnt sugar. While it is far more common to use these prescription pharmaceuticals orally or via snorting, teens experimenting with drugs have been known to smoke them.

PCP is a powerful hallucinogenic drug that is usually smoked and smells much like a permanent marker. In this sense, it is fairly easy to distinguish from other drugs.

How Do You Talk to Your Kids About Their Drug Use?

If you begin to smell something out of the ordinary, it may be time to sit down with your child and talk with them about their potential drug use. Mountain Springs Recovery offers some great tips on how to talk with your children about drugs and alcohol.

Above all, you want to convey that you’re coming from a place of love and not from a place of judgment. Take time to carefully plan out what you’ll say and how you’ll say it, as teenagers are notoriously difficult to talk with in regards to subjects like this.

What Do I Do If I Suspect My Child Has a Drug Problem?

If you suspect your child has a drug problem, it may be time to seek professional help in the form of drug rehab. Drug addiction is a mental health problem, and drug rehab incorporates a wide variety of techniques that address this illness so that your child can use an arsenal of tools to combat it.