Knowing More About Elderly Drug and Alcohol Use

Around 78 million of the baby boomers in the United States are progressing towards retirement and they are taking with them considerable education, health, and wealth. Along with these good things they carry with towards retirement are mental illnesses and alcohol and drug epidemic. This finding is yet to be recognized though, according to the report of the Institute of Medicine.

To some, the concepts of elderly and prescription drug or that the elderly may be hooked to prescription medications, illicit drug, and alcohol may appear to be improbable. This is because of the common preconceived notion that substance abuse and alcohol are only for the young ones and that elderly drug and alcohol use is not a serious issue to discuss.

The generation who were born between the years 1946 and 1964, or what they call as baby boomers, are shown to be the rapidly growing age group in the United States who are considered opioid dependent and opioid addicted. To some observers, this is a clear picture of what might happen in the future — a future highly vulnerable to drug abuse in the elderly and a future which needs more elderly drug abuse treatment. Though the adult population in the US is said to be the population that should live longer, it is also predicted that there will be a surge in the number of people who might be battling with elderly prescription drug abuse.

By next year, it is expected that the rate of alcohol and drug rehabilitation treatment among American adults will skyrocket by 200 percent and will reach as high as six million. 10 years later, in 2030, the 2013 State of Aging and Health in America report states that it is expected that the older population will then only account for around 20 percent of the entire US population.

Why is it difficult to recognize prescription drug abuse among seniors? 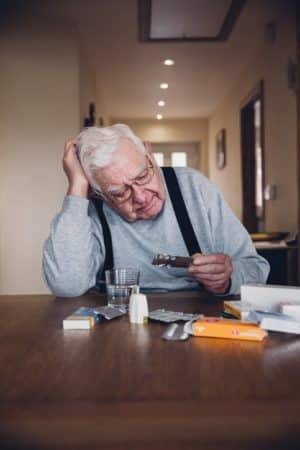 The onset of elderly medication abuse and prescription medication addiction and abuse may be difficult to diagnose and recognize.

First and foremost, the older adult population purchases a huge volume of prescription medications. According to the National Institute on Drug Abuse’elderly prescription drug abuse statistics, the 65 and above age bracket among the entire US population make up for approximately one-third of the entire outpatient expenditure for prescription medicines through the same population segment only accounts for the country’s 13 percent population. This report doesn’t provide an explanation for elderly abuse medication error yet.

Furthermore, NIDA’s drug abuse statistics and report also said that approximately 80 percent of the 57 to 85 age bracket have used at least one prescribed meds every day, while a huge 50 percent are reported to be taking 5 or more supplements on a daily basis.

This is the reason why seeing an elderly person or an aged loved one purchase and take these drugs won’t likely make one raise his eyebrows, most especially if they are armed with a prescription from a reputable doctor.

For elderly people within the 50 years old and up an age bracket, abusing and misusing prescription medications could be a part of the natural aging process. The same population is said to be susceptible to an elevated risk of medicine misuse compared to the general population mainly due to the fact that this population has a slower metabolism and that they have also elevated rates of anxiety, sleep disorders, and pain.

Another reason for drug and alcohol abuse among the elderly is the fact that our own memory changes as we get a bit older. We tend to forget names or where we last placed our keys as we get older. According to the American Psychological Association, the person’s behavior changes along with his brain changes. An elderly might forget whether or not he has taken his medication and just how much he needs to take at one time. Aside from these, he might also mix up his meds. All these are very common among the elderly population taking medications.

Legal or illegal drugs might affect one’s brain, in the same way, it can affect how the person behaves and what he remembers. Not all kinds or forgetfulness and memory loss are age-related though. Should the person experience increased cognitive difficulties while chronically misusing his meds, then it could be an indication of drug and med abuse.

Other red flags indicating substance abuse that is usually confused with old age are the following:

If you or a loved one who is elderly is showing any of the following signs after taking medicine, it would be best to check how they have been taking their meds to make sure that they are taking the right meds and that they taking it as prescribed.

Pain Management: How to know if it’s the start of Substance Abuse Among the Elderly

Since they are trying to manage chronic pain and other illnesses, older individuals are more prone to abuse of prescription medications.

More than 50 percent of the older US population is suffering from chronic pain disorders. This same population also show higher chances of increase in the intensity of chronic pain as they grow older. It is for these reasons that their doctors are also inclined to treat the elderly ‘s ailments by prescribing two or more kinds of medicine.

To add insult to injury, older people usually have a slower metabolism, so their bodies are also slower in breaking down substances that they take in. This explains the likelihood of them mixing alcohol with drugs being higher than normal. According to statistics, elderly people usually end up abusing two specific kinds of drugs: benzodiazepines and pain relievers.

Opioids are usually prescribed to patients to help them manage and treat pain. This is not only prescribed among seniors who struggle from chronic pain but to all other different age spectra. Codeine, Vicodin, hydrocodone, Percocet, Oxycodone (OxyContin), and many more are the drugs which are most commonly prescribed for the older age group. Addiction and dependence on opioid are both not good for whatever kind of age group. However, for the senior ones, abuse of opioid drugs complicates health conditions. Most elderly who grew to become dependent on any of these pain meds might have started using the drug legally to help them manage their chronic health conditions.

By 2020, the rate of addicted American elderly individuals who might need alcohol and drug treatments is projected to rise by 200 percent or by approximately six million. By the year 2030, that it is anticipated that the older population will then only account for around 20 percent of the entire US population.

To help fight opioid abuse and misuse, the Centers for Disease Control and Prevention (CDC) already issued a guideline to regulate opioid prescription for chronic pains. This guideline seeks to better the communication among patients and healthcare providers on the benefits and risks involving opioid treatment for chronic types of pain aside from other set goals.

Benzos, or Benzodiazepines, are usually prescribed to help patients struggling with seizures, insomnia, alcohol withdrawal, anxiety, and also for those who need to relax their muscles. Benzos work on the central nervous system and result in muscle relaxation, sleepiness, and sedation. The most prescribed benzos are Valium, Klonopin, Ativan, and Xanax.

In a recent article published by The New York Times, use of benzos is referred to a silent problem among elders. Notwithstanding the experts’ warnings, the elderly are still using more sleep medications and anti-anxiety meds, leaving themselves more prone to lethal side effects and even to a drug overdose. The same report highlighted how these medications might worsen fractures, falls, and other common problems for the adult population.

Though it might be difficult to check and see the signs of abuse of prescription meds among the elderly, there are plenty of ways to know that there’s something not right. Behavioral change is a good starting place to look.

These red flags and warning signs can motivate people to ask for professional help after their family and friends have prompted them to do so. It’s not the same thing in reality though. There are some elderly who are hesitant to receive any form of help even if they’re already addicted to prescription drugs.

What if you can’t stop abusing the drug

If your elderly loved one is now hooked to prescription medications and you feel like they are already addicted to it, it is best to seek professional help. You can speak to an Addiction Specialist to have your elderly loved one assessed and checked for the possibility of addiction to be able to come up with an appropriate treatment plan.

Don’t hesitate to call for help today and avoid any fatal side effects.