How Addiction Affects The Transgender Community 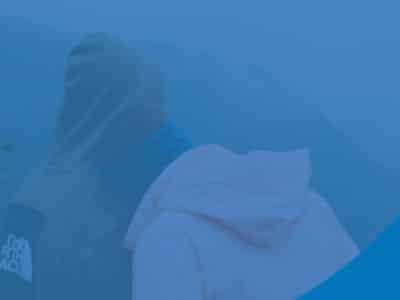 With the transition of athlete and reality TV star Caitlyn Jenner and the acclaim and attention actress Laverne Cox has earned for Orange Is the New Black and other projects, the United States is more aware of and accepting of transgender people than ever before.

That hasn’t been all good news, however. Traditionalist and confused citizens and politicians have responded by barring them from the military and public restrooms that conform to their gender identity.

It’s no wonder, then, that even though transgender people represent 0.6% of the U.S. population, according to the Centers for Disease Control and Prevention; they make up a greater percentage of those with mental health and substance use disorders—a higher rate than the overall LGBTQ community.

Note: If you or a loved one are battling addiction, we are here for you. SunshineBH has locations in Texas, Colorado, California and Illinois.

What Is Gender Spectrum?

“The Gender Spectrum” refers to the idea that there are many gender identities (female, male, transgender, two-spirit, etc.). It also acknowledges that there is a range of gender expressions, or ways in which people externally communicate their gender identity to others through behavior, clothing, haircut, voice, and other forms of presentation. Gender expression may or may not conform to common expectations around one’s gender identity.

It can be confusing for LGBTQ individuals as well as cisgender ones (people who identify with the same gender they were assigned at birth).

In a survey of LGBTQ individuals, 68% of LGBTQ respondents did identify as either man or woman—binary—and 7% as transgender binary. The other 25%, however, identified their gender with some non-binary category along the gender spectrum.

Eleven percent thought “gender nonconforming” was most appropriate, and another 11% felt “multiple identities” was a better fit, but the other 3% chose or came up with different designations—more than 25 different gender categories—including nonbinary, queer, and genderqueer.

Not everybody who identifies as non-binary agrees on what the term means. In general, nonbinary—often, though not universally, used interchangeably with genderqueer—refers to people who feel their gender identity isn’t simply “man” or “woman”. They may feel they fall in between the binary categories, outside of the categories, or that they move between them.

Non-binary identity alone is not a biological distinction. It doesn’t necessarily mean you are transgender or that your genitals aren’t 100% male or female (intersex), though it can. Non-binary—not binary—can coexist with other designations. It’s an innate feeling.

Although transgender is often grouped with lesbian, gay, bisexual, and questioning/queer, it is a distinct description.

Transgender refers to a person whose sex assigned at birth (i.e. the sex assigned by a physician at birth, usually based on external genitalia) does not match their gender identity (i.e., one’s psychological sense of their gender).

What makes someone a transgender individual is gender identity, how they feel inside. It’s not about what gender you are attracted to or how you like to dress (gender expression).

That identification alone makes someone transgender, but some modify their bodies to more closely resemble their gender identity with hormone replacement therapy, cosmetic surgery, or reconstructive surgery. Such gender confirmation surgery (or gender affirmation surgery) includes facial and chest modification, and vocal and genital surgery.

The realization that one is transgender may predate sexual attraction.

In December 2019, a 12-year-old in England started taking hormone blockers to prevent puberty so that she could eventually transition to a woman when she is 18. According to her mother, she had already identified as a girl by age 3. (In the United Kingdom, a child can take hormone blockers as young as 10. More than 1,000 children have done so.)

Until age 11, she went to public school, sometimes dressed as a girl (she legally changed her name from Ashton to Ashley) with the support of her school’s educators and fellow pupils.  Despite that, bullies and some other students’ parents drove her to homeschooling; she suffers from anxiety and sometimes even says she wants to die. She’s not alone. 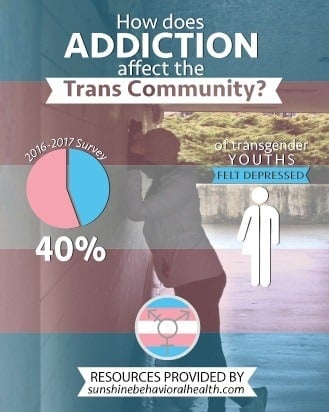 According to a 2016-2017 survey from the Human Rights Campaign, a LGBTQ rights organization, transgender depression statistics are high. The survey found that while 12% of non-LGBTQ youths felt “depressed most or all of the time” in the past 30 days, 28% of LGBTQ youths felt likewise, and 40% of transgender youths.

Since same-sex attraction in a largely heterosexual society can cause mental health disorders, it is understandable that to feel that one is not in the right body can cause mood, anxiety, and substance use disorders, as well as suicidal ideation, attempts, and worse.

Among other transgender mental health statistics, rates of anxiety disorders are almost three times higher than the general population. The rate often decreases following treatment with “cross-sex hormones,” at least for transgender women. (A greater percentage of transgender individuals seem to have autism spectrum disorder, too, though that is a neurological and developmental disorder, not one of mental health.)

Other transgender mental disorders statistics have rates closer to the population in general, with no increased risk of Bipolar Disorder  or Schizophrenia.

A study in Sweden found that when transgender individuals have gender confirmation surgery, the likelihood that they would seek treatment for depression or anxiety-related mental health disorders declined by 8% each year. It remained higher than among the general population, however.

What Is Gender Dysphoria?

One reason depression and anxiety rates are higher among the transgender population is gender dysphoria: some people feel uncomfortable with the “sex-related physical characteristics” with which they were born.

Gender dysphoria refers to psychological distress that results from an incongruence between one’s sex assigned at birth and one’s gender identity; was formerly known as gender identity disorder, though that is now considered an inaccurate designation because it implies their gender identity is the problem. In May 2019, the United Nations World Health Organization removed “gender identity disorder” from its official diagnosis manual, putting transgender in the sexuality category instead of labeling it a mental health condition.

Some want gender confirmation surgery to make their outside bodies match their inner selves, but not all. Just 10% of transgender people seeking surgery are going for genital surgery or medically transitioning. More are content with less invasive modifications such as hormone treatments, facial feminization, and male chest reconstruction.

Transgender People and Substance Use Disorder

Only 3% of people identified as being gender dysphoric in a population-based study released in 2018 were seeking treatment for substance use disorder, but alcohol and substance use is much higher than that: 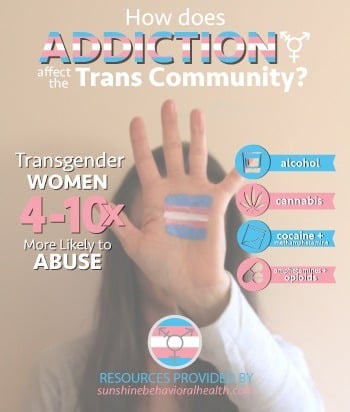 A study, published in the Journal of School Health—based on a statewide survey of elementary, middle, and high school students—found that transgender students were:

Another study found that transgender abuse statistics, at least among transgender women, were even higher—as much as 4-10 times higher for alcohol, cannabis, cocaine, amphetamines, tesla pill, methamphetamine, and opioids—because of stigma, both self-directed and external, including discrimination and physical or psychological abuse.

Researchers in the Journal of School Health study also found that the main cause of increased transgender substance abuse isn’t gender identity or even gender dysphoria, however; it is discrimination, minority stress, and the lack of a “social support mechanism.” Substance use disorder (SUD) is sometimes a coping mechanism.

If transgendered teens or young adults do not feel accepted, if they have a mental health issue such as depression or anxiety, they may turn to illegal or illicit substance use in an attempt to self-medicate. This is known as a co-occurring disorder or a dual diagnosis.

All clients should be evaluated for co-occurring mental health disorders, but transgender clients are at greater risk than most.

Transgender people are more likely than other groups or the population at large to seek SUD treatment than the non-transgender population. That doesn’t mean effective treatment is always available.

People in the transgender community need the same SUD treatment as other people—detoxification, cognitive behavioral therapy (CBT), aftercare, maybe medically-assisted treatment—but there have been few studies of what therapies might work better for transgender clients.

Most researchers agree that there is less information available on effective SUD treatment for bisexual and transgender clients than for other members of the LGBTQ community, even though transgender individuals are often subject to extremely negative attitudes and discrimination.

If you loved one is transgender; it is important to recognize substance abuse is important; for example: like blood when blowing nose after coke use.

Problems faced by transgender people with SUD include:

Such conditions are not conducive to recovery. Because of it, some will try to quit cold turkey, which may work for some drugs; however, certain drugs like quitting cocaine cold turkey– is very dangerous. 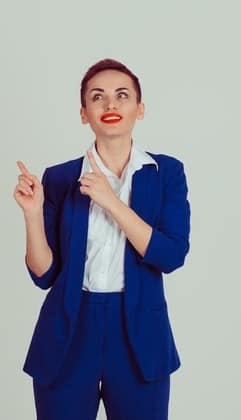 To improve the odds that transgender individuals will seek substance use and mental health treatment that succeeds in the long run, it’s better to find specifically transgender and/or gay and lesbian rehab centers, or at least programs.

One such program opened in November 2019 at the Gay and Lesbian Center of the Community Counseling Center of Southern Nevada.  Affirmations offers mental health counseling for the LGBTQ community. Cost isn’t a factor because it accepts state Medicaid, charges for its services on an income-based sliding scale and receives some grant funding.

Affirmations says it addresses LGBTQ clients from a compassionate, “culturally sensitive” perspective not always found in a profession where some still consider non-cisgender or transgender sexuality an illness that needs to be cured and that conversion therapy is appropriate,

Unfortunately, such centers and programs are hard to find. There are not enough transgender people in many communities to sustain a transgender-only bar, let alone a treatment center.

A more achievable goal would be a treatment center that helps people and doesn’t make substance use worse.

One program for male-to-female transgender clients in San Francisco’s Walden House employs some MTF transgender staff, including a licensed clinical social worker and an addiction counselor who is in recovery. Not only are such staff members sensitive and empathetic, but they may also serve as positive role models, since they may be the first transgender professionals the clients have encountered.

Sensitivity training for staff and clients

Former clients of treatment centers may have or start support groups.

Because they cannot spend all of their time in a bubble, transgender men and women will also need to interact with the non-transgender community. They need to know how to look for work and find housing. A good aftercare program will provide this sort of aid.

Transgender clients need to have their gender identity recognized and respected or they are unlikely to enter substance use disorder rehab, let alone remain for the full course of treatment or experience lasting benefits from it.